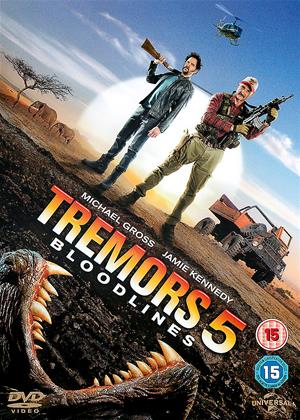 I watched this because it got some superb reviews. Alas, it seems those reviews were written in the same spirit that made tens of millions of "Star Wars" geeks attempt to persuade themselves "The Phantom Menace" was quite good because it had been a very long wait and it was the best they were going to get. In the same way, 25 years after the original "Tremors", and 11 years after the third and seemly last of those increasingly desperate straight-to-video sequels, Michael Gross is back as Burt Gummer, shooting big guns at graboids, or at any rate, second-rate CGI approximately resembling them. And that's all the connection it has with any of the previous films, having been made by an completely different creative team and shot entirely in South Africa to save money.

Another money-saving measure is the cast. Everybody is a South African you've never heard of, apart from the two big-name (well, the biggest the budget ran to) American stars, Michael Gross and Jamie Kennedy. In general, the white South Africans are creeps, caricatures, or both, while those black characters who aren't extras are dignified people who seem to be in a much more serious and genuinely suspenseful movie than the white folks. Unfortunately, they mostly end up having their adventures in parallel with those of Burt Gummer and his new sidekick but several miles away, presumably because their presence would get in the way of the comic double-act the two stars are putting on for our entertainment.

Jamie Kennedy is one of the worst actors ever to somehow be in more than one film. Here, he's playing a middle-aged man who talks like a teenager, and he talks incessantly, sometimes in a whine even more irritating than his normal voice. Every single line that spews from his lips is a feeble witticism, a juvenile slang term supposed to indicate that he's down wid da kidz, or both; and he keeps this up even when there's nobody there to hear him except, unfortunately, us. The childish tone is reinforced by the constant "funny" references to Michael Gross's age, as if they have to justify the fact that an actor who has played the same rôle on and off for a quarter of a century isn't young any more, the minimal gore and ludicrously mild swearing, and the fact that both the trailers on this DVD are for horror films apparently aimed at 10-year-olds.

So what we end up with is a bunch of rather cheap CG maggots which are kept offscreen as much as possible and only show up one at a time, fighting an elderly actor increasingly playing it for laughs, an incredibly annoying man-child who you wish would get killed from the get-go but who obviously won't be, and a shapely black lady who tries very hard to turn this dreck into a better movie, but is mainly there for the camera to linger on her tightly-clad torso whenever it possibly can. And the worst thing of all? The surprising revelation at the end sets things up so that if there's ever a "Tremors 6", Jamie Kennedy will definitely be in it. Do your bit to help prevent this obscenity from coming to pass by not bothering to watch "Tremors 5".