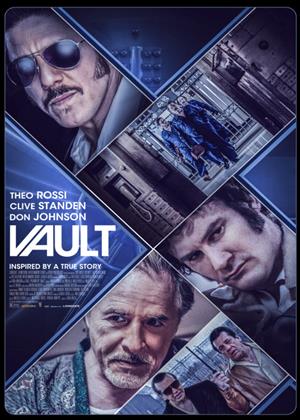 Not released
Back Fork

Not released
The Opposite Sex

Not released
The Discovery

There’s a moment in the true crime caper of Vault where I felt a little guilty seeing myself in the antagonist mafia leader of Raymond Patriarca Sr. (Chazz Palminteri). He has a meeting with his right-hand man Gerry (Don Johnson), referred to as The Frenchman. Gerry inquires if he can be a mademan for all his years of service, despite being Italian. Even though Raymond has known him since childhood, Raymond merely smirks than grits that a non-Italian will ever be made. A part of me felt like Raymond, looking down on this heist picture with little more than a scoffing of how this is a genre that’ll never quite rise from being mildly amusing.

The truth is that Vault puts in far more effort than most heist pictures of this nature and there’s certainly some energy present where it’s most vapid in other films. It has a fairly familiar ensemble that fits snugly into their roles of either mafia men or small-time crooks. The 1970s setting is embraced fully with afros high and a soundtrack that is almost a parody of the era with its swanky allure as the clock ticks in tense situations. How easy it would be for a film such as this to easily slip down the route of a goofy satire. Yet the film tries to display some grit and emotion to its true crime story and there’s a bit of admirability in that commitment.

Deuce and Chucky are established as two best friends that are as devoted to each other as they are too small crimes. They hit up small shops but they’re amateur enough that they make mistakes. A robbery of one shot leads to an accidental shot to someone’s leg, but even more surprising is that the bitter Karyn (Samira Wiley) demands a ride home as she can’t afford bus fair if she is robbed and can’t walk home in her current shoes. A romance soon blooms.

The duo are recruited by Gerry once that aged mafia man views his chance when Raymond is behind bars. Now is the perfect time for a band of gangsters to rob one of Ray’s establishments. And Deuce and Chucky choose the biggest target: a fur shop that the mafia uses as their secret bank, loaded with $30 million in cash and goods. This made for one of the biggest heists in American history considering the crooks involved and how much they lifted. Of course, they robbed from the mob. And though Ray is still in the slammer, mafia work still proceeds and top priority is getting back and the collective who made off with most of the mafia money stolen.

Vault moves quick enough to never tire but it never really feels as though it takes off either. Where the film works best is in the emotional connection of Deuce and Chucky. As they struggle to lay low while the rest of their heist mates are slaughtered, they question their friendship. There’s a very intense moment when they confront each other and breakdown in tears, fearing the only way out of the situation is if they kill the other person. Unlike the relationship of Ray and Gerry, there’s more history between them that hasn’t faded with age or power. There’s a still a chance they could remain friends, even if it means being taken in by the authorities.

The only problem is that most of the film meanders around mild mafia tropes and scenes, treated more as extensive window-dressing for the story than ever feeling all encompassing. Palminteri is a natural mob boss but we already know that from his multiple roles. A better film could him more extensively. Don Johnson is also very underutilized when placed in a position where he is more tight-lipped than anything else. It’s these elements that make Vault more ho-hum than it really should be. By the time Vincent Pastore, you can pretty much pinpoint his placement in this mob story. The final result is a heist picture only a tad more competent and compelling than others.