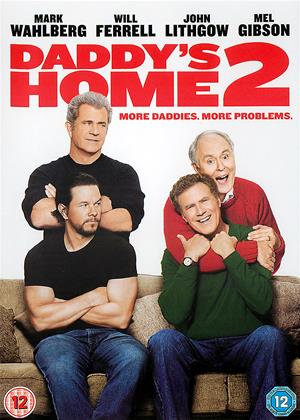 'Lets go to the cinema', says I

And that is how I came to see this film. I should have listened to child 2, & over-ridden child 1.

This is a film without any redeeming characteristics, expect possibly that it came to an end. It makes jokes out of children learning to use assault rifles to shoot small animals. If there is a hackneyed line, it delivers it. Will Ferrel has never been so bad.

Towards the end of the film, there is a dig at formulaic Christmas movies, where it describes the plot of a supposed risibly bad Christmas action movie called Missile Tow. I would rather have watched that.

Is not too awful. Rolls along quite well, and some quite good moments. Possible Xmas film after few drinks etc............

Saw this at Xmas on the big screen, woefully unfunny. More notable cast, more laughs?...answer no, even Will Ferrell can't lift this lifeless dead duck or should I say dead Turkey into life. Wahlberg does his usual macho thing only to be upstaged by his on screen father an even more macho husky voiced boozy Gibson (not much acting needed) who is basically pointless other than trying to be as un-PC as possible. Simply beyond me how this ran for over 2 months at the local cineworld. Terrible.

If you think this will be like the first film then it isn't .The first film i found fairly amusing & entertaining but this one isn't either of these.Based around Christmas ,i didn't find it funny or cohesive & I would steer clear of it.

Daddy’s Home 2 is an improvement over the stumbling stepdad comedy though its not a high bar it crosses, given how little it ascends. It’s a plug-and-play script that is built more to be a forgettably easy-to-digest Christmas comedy with the family. It has less in common with the louder nature of Will Ferrell’s slapstick comedies and is more in tune with Adam Sandler’s brand of simple silliness, sans the overt offensiveness. It all adds up to a passive farce fit for the goofy relatives.

Ferrell and Mark Wahlberg are back as the father and step-father that have buried the hatchet to become the manchild friends Farell breeds so well. They now work as a team a dorky duo fully committed to the benefit of their children to a pleasing if not absurd degree. The last mountain they believe they have to conquer is the one of Christmas. It can get confusing enough for the still-growing kids to have to deal with multiple house visits during the holiday season. And so a pact is formed for Christmas to be spent together under one roof. Sounds doable.

And then comes in the grandparents to stir the pot of already brewing problems with the children. Wahlberg’s father is played by Mel Gibson, a man who is still seen as a heartthrob by women (somehow) and has the nature of a die-hard conservative, eager to teach his kids how to hunt with their first gun. Ferrell’s father is portrayed by John Lithgow, as a touchy-feely sprite that takes the route of smiles and hugs. They’re naturally mismatched grandparents and their bickering sparks up the flame of family squabblings once more, as the adults bicker over how the kids should be raised in every aspect from controlling the thermostat to shooting turkeys.

All the hallmarks of a watered down National Lampoon style Christmas comedy are present. An unorthodox Christmas tree will be cut down in the woods, leading to a cell phone tower being decorated with Christmas lights. Gibson convinces the rebellious girl of the family to go out for a turkey shoot and someone will end up being shot but not killed. Lithgow will make sweet and sensitive jabs at the children, before tearfully breaking down about admitting a family secret. Wahlberg will stammer as he aims to assert his dominance both with his kids and his father. And in classic comedic fashion, Farell will overdo everything, from his excitement for the Christmas season to the slapstick nature of being pummelled by kids and Christmas trees.

All of this proceeds according to design, punctuated by the cartoonishly portrayed children that go through the motions of the awkward tomboy girl that wants to shoot a gun and the awkward boy who fancies girls. The family will give them good and bad advice, Lithgow talking down the boy from asking Santa for firearms and Gibson looking on with a goofy and encouraging grin as the boy kisses his half-sister. Even the surprise of John Cena as another family member goes exactly according to plan without a lot of surprises when he pops up halfway through the film. The one decent wild card of a comedic addition is the voice-over cameo from Liam Neeson when the family decides to go to the movies for a Neeson Christmas action picture. I’d much rather watch that overblown mess than this innocuous picture.

The best I can say about Daddy’s Home 2 is that its a very inoffensive comedy, despite the clashing of the touchy-feely and hunter-caveman grandpas. It does what it does and never fully steps on anybody's toes in its attempts to be a silly family Christmas comedy. There’s a heart hear even if its buried in the usual commercial coating of a star-studded comedy. At the very least, it was pleasing to see Lithgow awaken from his coma of dramatic roles and throw on some of that loud charm I’ve missed since 3rd Rock from the Sun.