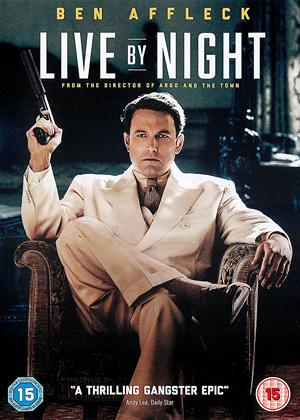 Reviews (2) of Live by Night

Directed by, and starring Benn Affleck, this film has all the hallmarks of a well crafted thriller, with an intricate and lengthy plot that is compelling, with believable characters well acted by all concerned.

I think it's the broad span of great characters that makes this film so enjoyable, and the actors are given a good script to work with.

The whole film was gripping from start to finish, and the sound track in Dolby Atmos was quite stunning.

Watch this to see how films should be made!

(We watched Ben Affleck's other 2016 film "The Accountant" the next evening, and discovered that these two films beautifully demonstrate the two extremes of quality in movie- making).

So so - Live by Night review by cr

I really like the two ben affleck films that he stared in and directed, the town and argo. I hoped this might have been the same but sadly not the case. I just found it so so. So long, so pointless as it been done many times before and better, so boring, so uninvolving the time drags and i ended up fast forwarding to the end. So disappointing and so could have done something more entertaining!

Ben Affleck usually has a firm grasp on both his acting and directing, but he sadly fumbles with Live By Night. He undertakes a grand tale of prohibition era gangsters that is loaded with plenty of exciting elements from car chases to explosive gang violence. So much of the look and feel of the 1920s life of crime is nailed with ample details. So why does Affleck look so uncomfortable and tired as gangster Joe Coughlin? Either pulling writing, directing and acting duties on this picture exhausted him or that suit is too tight.

Joe has an interesting life as a mobster, but seems to approach it all with a dreary passivity. He says he’ll never join the mafia, but warms over quickly after losing his girlfriend and serving prison time. He refuses to shoot or kill anybody, but eventually does so anyway without much hesitation. Last year, Affleck played an unemotional man in The Accountant by playing someone with Asperger’s Syndrome. That character had a certain allure for his unfeeling nature whereas the character of Joe just appears as a random dead-inside gangster. Affleck seems to mistake dead and distant for subtle and aloof. Was Joe supposed to have Asperger’s as well?

The story plucks Joe out of Boston where his life among mobsters goes to hell, accepting a new role as a speak-easy territory running in New Orleans semi-reluctantly. He arrives to an already bustling illegal business where the local sheriff (Chris Cooper) is open to working with him. Joe's gangster partner (Chris Messina) is both wise and fun to be around. Joe befriends some Cubans and quickly falls in love with a beautiful Cuban woman (Zoe Saldana). As he continues his business of expanding mob reach into casinos as the speak-easy business dries up, he must also compete with the territory-grabbing Klu Klux Klan and religious protesters.

Shouldn’t all this be exciting? It was a time of big changes in government and shifting in mob activity. So why does Joe look like he’s about to fall asleep during all of this? He threatens the sheriff for the safe return of his drug-addicted daughter (Elle Fanning), but never seems menacing or caring during this scene. He threatens a Klan member at his workplace, but never seems that intimidating, even after he motions for his pal beside him to shoot the Klan member in the head. Even moments when he is speeding away from shooting cops or gunning down mobsters in an epic gunfight at a mansion, there’s little care in his presence. Even contemplative moments where he makes social justice statements and pontificates on religious beliefs of heaven, there's nothing in his eyes.

And what of the other actors? They’re decent, but can’t do much in such pitifully small roles. Saldana can’t do much of anything in a role where she plays the frustrated love interest and little more. Cooper seems to display the most emotion of any character in the picture with his tragic arc, but the movie forgets about him as it forgets about most characters. There’s no point in becoming attached to anyone, as most characters will die quickly or off camera. Meanwhile, Joe approaches his mob job with inspiration of a desk clerk, drearily narrating his life as though it were more of a history book and not his own life.

It’s doubly sad that the performances and characters don’t shine, as the production values present are stunning. The car chase through Boston with rickety automobiles and tommy guns blaring is a fantastically exciting scene. The brisk pacing of bombings and stabbings that shape the crime scene of the era briefly wake the movie from its doldrums of lukewarm plights. And the shootout at a mafia mansion is pretty damn entertaining, especially a particular noteworthy moment when a mobster falls to his death off a staircase while being shot on his way down. These are all fantastic moments, but it begs the question of why the whole movie couldn’t be this engaging.

I don’t know what happened to Affleck during the production of this movie that caused him to approach it so uninvolved, but he needed to snap out of it. I know Affleck can be a great director, as was the case with The Town and Argo. I know he can be a great actor, as he proved everyone wrong when fans reacted negatively to him playing Batman. He can direct and act better than this to make something more than just a forgettable crime movie. I’d say he could make this type of movie in his sleep, but it looks as though he already was.