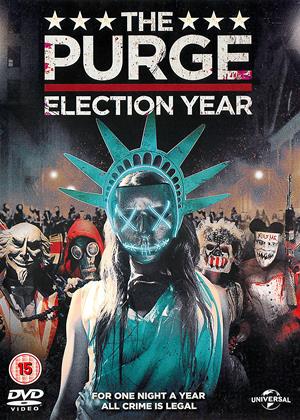 Synopsis:
It has been two years since Leo Barnes (Frank Grillo) stopped himself from a regrettable act of revenge on Purge Night - the 12 hours of lawlessness. This year, the annual ritual comes at the eve of a heated presidential election with the nation deeply divided between those who are pro - and anti-Purge. As head of security for Senator Charlie Roan (Elizabeth Mitchell), Leo's mission is to protect her during her controversial and contested run for president. But when a betrayal forces them onto the streets of Washington, D.C. on the one night when no help is available, they must stay alive or both be sacrificed for their sins against the state.
Actors:
Frank Grillo, Elizabeth Mitchell, Mykelti Williamson, Joseph Julian Soria, Betty Gabriel, Terry Serpico, Edwin Hodge, Kyle Secor, Barry Nolan, Liza Colón-Zayas, Ethan Phillips, Adam Cantor, Christopher James Baker, Jared Kemp, Brittany Mirabile, Raymond J. Barry, Naeem Duren, Naheem Garcia, Steven Barkhimer, Tom Kemp
Directors:
James DeMonaco
Producers:
Michael Bay, Jason Blum, Andrew Form, Bradley Fuller, Sebastien Lemercier
Writers:
James DeMonaco
Aka:
The Purge 3
Studio:
Universal Pictures
Genres:
Thrillers

Reviews (3) of The Purge: Election Year

Still not as good as the first one - The Purge: Election Year review by gazmb

I enjoyed this 3rd film in the series of Purge films. It's ok but for me not as good as the other two , for me the first is still the best one out of all of them. Again one night of the year when when violence and killings are legal. One of the main characters in the film is in politics and trying to get into power to stop this once a year event being legal.

I liked the film as I did the others, the first is still the best one, probably as the idea was different. Hope they don't slog the plot to death,.. lol!

Not as good as the first but then how could it be? The first was something new and novel but we all know what's going on now.

Still a good film but not great. Some good set pieces but also some very generic weak parts, you know young, good looking women scantily clad wandering about in very stylised outfits with very scripted speeches and incredibly clean styled weaponry not being harassed by any other purgers and just being able to do what they like, line having a little dance in the street. It would have been nice to see so more realistic women but hey that probably wouldn't look so good on the trailer for getting people to watch the movie.

A little predicable too but then what would you expect really.

Good entertainment with some good violent scenes as you'd want from a movie like this.

The Purge: Election Year (aka The Purge 3) review by Adrijan Arsovski - Cinema Paradiso

For a third sequel, The Purge: Election Year bodes surprisingly well and blows similar action pieces out of the water any day of the year, despite the obvious analogies that it’s desperately trying to draw. During which, it masquerades as political satire, when instead it’s just a reminder of the wickedness in man and has little to do with internal politics, especially those within the United States of America.

For a subversive take on racial segregation and the recent movements that sprung up in the states (Black Lives Matter), The Purge: Election Year is actually quite decent a piece of cinema, if you dare to call it that way. With bleak, washed out tones, optimistic characters in a sea of nihilism and some loose cannons in the form of spoiled teenagers, James DeMonaco’s love child, intentional or not, goes deep into exploring what urges drive people forward in life – and it becomes clear that that primal urge is aggression.

Mostly aimed toward others: ‘inferiors’ if you will.

Laws passed or not, banned legislation or anything of the sorts is just a mimicry to keep fueling Homo sapiens’ primordial desire to kill and secure their own well-being. One kill for fun, other in self-defense, however all are ready to pull the trigger anytime – especially when it’s allowed or even encouraged by the law.

In the movie, the only true beacon of light is Elizabeth Mitchell playing Senator Charlie Roan. She wants change, other don’t: conflict ensues. A local shop owner tries to hide his fear by cracking racial jokes at every turn, but deep down Joe (Mykelti Williamson) knows that we’re all doomed if we continue pursuing the path put forth by officials, and backed by the nation.

If you look even deeper, The Purge: Election Year doesn’t have clear antagonistic figures - only those whose moral values slightly differ from one another. After all, who but man himself is in charge for his of definition of morality to interpret it in any way he deems satisfactory?

Some have accused the film of glorifying violence, but is it really? As an annual event, The Purge doesn’t glorify, encourage or ignite violent events aimed toward its members of society. It’s the Humans who decide to unleash that primordial rage upon other citizens who just cannot defend themselves properly if their lives depended upon it.

Music is decent, acting as well, cinematography could be better in few places, action is gory and over-the-top and the story resolution is there if you just dig deeper enough to unravel the events that led up to it.

Overall, The Purge: Election Year is surprisingly smarter than its previous two predecessors and for that – kudos to director and writer James DeMonaco.