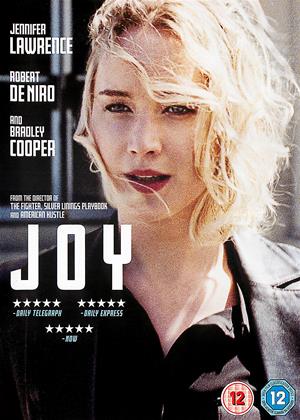 Starts off with 5 minutes of rubbish and goes downhill from there. Ridiculously annoying, low budget movie with no direction. Suffered it for 20 minutes and thankfully turned it off.

It was mildly interesting, but I didn't really care about any of the characters. Also, Joy's personality seems to radically change in the last 20 minutes of the film.

Few movies leave in a state of speechlessness. This isn’t a silence out of impressed astonishment or appalled shock. Joy exists in this region of film that never falters toward either side, remaining perfectly still and lifeless in the middle. If someone were to ask me if I would recommend Joy, I’m not so sure I would just out of the confusion in what to feel with all this. I’m almost amazed to be this conflicted over a movie about a woman who invents a mop.

Jennifer Lawrence plays the titular character, Joy Mangano, as a woman who has been endowed with feminists traits since childhood. Her fairytale stories during playtime don’t involve princes and romance, but independent women inventors who don’t need any men in their lives. She keeps being told to become a strong and independent woman. The prophecy has been set for Joy and she appears to need it the way her life turns out. Her family crowd her house, her relationships become muddled and the addition of children to her life complicates her plight to succeed. But her life begins to turn around when she stumbled onto the ultimate product that will make her a mint: the self-wringing mop.

But even upon this discovery, Joy still has some steeper mountains to climb. Patenting, production and distribution costs weigh heavy on the shoulders of this single mother. People try to screw her out of money, sell her flimsy materials and stop her from selling her product in public. You know, all the natural forces that hold back a young entrepreneur. And though Joy begins to feel the pressure, she fights back against the tides and ultimately becomes the successful entrepreneur she was destined to be. She works through her fears of speaking on television to promote her product on QVC. She works through the fast-talking material producers to make sure she’s getting what she paid for. And she’s a slick negotiator when it comes to landing the type of money she wants to pull down.

So why didn’t I feel anything? The usually reliable David O Russell is at the helm and the cast includes such talents as Bradley Cooper and Robert De Niro. And, yet, everything feels like it’s firing on a grade of B-. This is based on a true story and it certainly has the feel of a true story with its messy mixture of reality and fantasy - somewhere between a compelling bio and a Lifetime movie of the week. The character of Joy is built up to be a woman down on her luck who rises to power. On her rise, however, we start seeing shades of her becoming more bitter and calculative. But I never got to see Joy become that happy professional woman she was destined to become or the angry business woman she couldn’t foresee. The movie attempts this strange balancing act to make sure Joy is never built up to be a fanciful hero or a built-up villain.

Joy just sort of exists as this woman who climbed the ladder with grit, but not enough to warrant a unique story. It’s a perfect example of one of those movies based on a true story where I really wish they took some liberties with the material. Too often I hear people complain about movies based on true events lying by adding in extra content. Joy is exhibit A on how a movie can be so lethargic by sticking to the facts. I doubt many would be angered if this story of a mop inventor were heightened by some addition. As it stands, the straight story on the life of Joy Mangano is just not all that interesting, even with great performances and solid direction.