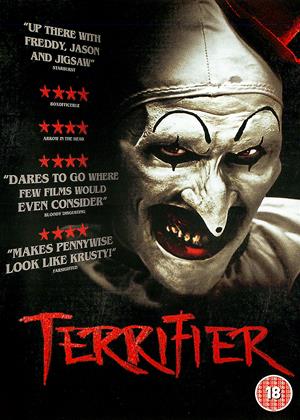 Not Terrifying but very Grizzly - Terrifier review by porky

Art the Clown is Creepy as Hell, He was incredibly Terrifying in the short bits he filled between stories in 'All Hallows Eve #1' but in this he is a bit Dull..... I guess we get too much of him ,and his silence becomes a bit deafening.

Yes it is Gorey ,Yes it is Threatening as any Slasher Movie, but I think we lost the 'Terrifying Art the Clown' somewhere along the way .....

Worth seeing if Gore is your thing ,but its not as good as 'All Hallows Eve' sadly .Shame as I had High hopes for it .

Terrifier sets out its stall pretty early with an opening act that contains it all: drama, creepy storytelling, hammy B-movie 'slasher-film' acting and luridly excessive violence and gore. The film sticks to its guns from there as two party girls encounter a creepily weird clown in a pizzeria and a night of terror begins...

The acting never escalates above 'average to below-average', and the storyline is so thin that I genuinely can't recall if it pretends to have one other than 'drunk girls try to escape clown'.

However, this is that rare thing; a low-rent horror movie where they're so committed to trying to make the bad guy creepy and the kills excessive that it somehow just works. David Howard Thornton commits to the hilt as the weird, grinning madman 'Art the Clown', and the special effects, while not always perfectly convincing, are definitely always extremely gruesome. Masses of fake blood is shed in this film, and a wide variety of cast members get sliced, diced and massacred in creative and almost laughably excessive ways.

If you're looking for a bona-fide slasher movie with a plot and sustained pacing, this is not that movie.

If you're looking for a gore picture with a charismatic bad guy and fountains of the red stuff, which somehow just about transcends its very thin plot, this is actually pretty decent.

Probably a good (and enjoyably ridiculous) movie to watch with a crowd of drunken friends, Terrifier doesn't terrify, but it does entertain.

In an age where it seems as though every horror movie wants to amplify a throwback aspect with nudges and winks to the era of 1980s video nasties, along comes a film like Terrifier that takes the concept more earnestly than campily. Just look at that stark cover of an evil clown, seeming as though it was plucked right off the rack of B-movie terrors for it simplicity. There’s also a simplicity to the film itself that doesn’t bog itself down in trying to be anything more than a fright fest of one unfortunate Halloween night.

The horrifying clown in question is Art, a not-so-fun clown considering his grimy makeup and constant grimace. He finds something to do on Halloween night by stalking to drunk women, Tara and Dawn, after they’ve just gotten out of a party. In his stalking, Art proves he’s not really a people person as he smears poop all over a pizzeria and is kicked out. It’s a given that at some point he’s going to be slashing up victims and it isn’t too long before he does so and takes one of the women hostage. The other is soon stabbed and drug, as is there friend who comes looking for them.

Terrifier very much follows the the simple slasher formula evoked by the likes of The Texas Chainsaw Massacre. Art kills a few, captures some, and mutilates a few others. There’s an involvement with a crazy cat lady that works into a rather nasty piece of flesh being used as fashion statement, making that Texas Chainsaw comparison all the more apt. The kills are varied and gory, ranging from steadfast guttings to the more complex sawing off of limbs. One particularly gruesome scene features Art eating off a face.

This is all very gross and I’m sure the mere mention of such cannibalism and wearing of the skin has probably turned off a few. Let’s put this in context for a moment though. This is a film with such a simplistic horror title as Terrifier. The cover features a gross clown with a devilish grin of nasty teeth. What would one expect when watching such a film? A contemplation on the decaying state of entertainment? A commentary on the masquerade of Halloween being a dangerous pastime? Having grown up in the age of video stories lined with shelves of similar titles, the horror hounds are not as thirsty for such nuanced storytelling of a killer clown.

And, in a way, I’m kinda glad it’s not. Had this film tried to mash in a message amid its gory centerpieces, I doubt it would come off as competently conceived given that greater focus was given to making sure the blood and guts look just right. As it stands, Terrifier is a picture built only to be disgusting and vomit-inducing in its grimy and gruesome assembly. While it’s nothing that holds all that much appeal for myself outside of the brief spectacle of Halloween-infused terror, I can’t say I was bored or disappointed in a film that aimed so low and hit its goal with a sloppy splash of bloody grossness. A simple slasher that should please fans seeking little more.