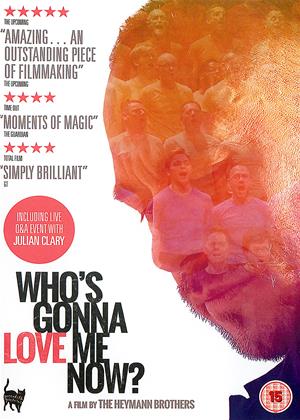 Synopsis:
At the age of 21, Saar Maoz is kicked out of his Kibbutz for not being 'religious'. Cutting all ties with his family, Saar flees to London and embraces the freedoms of London life in the 90s. Then one day the highs of his new-found freedom come crashing down around him. With no family of his own, Saar seeks solace in the arms of the London Gay Men's Chorus. Suddenly life has a new meaning. After 17 years Saar reaches out to his conservative Israeli family in an attempt to reconcile. Now his parents are coming to visit… 'Who's Gonna Love Me Now?' isn't Saar Maoz's singular journey, it is a monumental trek undertaken by his entire family.
Actors:
Saar Maoz, Alon, London Gay Men's Chorus Band, Elimelekh, Katri, The London Gay Men's Chorus, Reut, Tsur
Directors:
Barak Heymann, Tomer Heymann, Alexander Bodin Saphir
Producers:
Barak Heymann, Tomer Heymann, Alexander Bodin Saphir
Writers:
Barak Heymann, Tomer Heymann
Studio:
Peccadillo Pictures
Genres:
Documentary, Lesbian & Gay, Special Interest

Reviews of Who's Gonna Love Me Now?

Who's Gonna Love Me Now is an Israeli/British production that follows Saar Maoz, a gay individual whose sexual orientation estranged him from his family prior to his expulsion from his religious kibbutz back in Israel. This film is hard to watch at times, mostly because of how filmmakers Barak Heymann and Tomer Heymann chose to portray Saar’s descent into depression and his consequent rise to normalcy thereafter; but Who's Gonna Love Me Now? is mostly hard on the nerves because it deals with one of 21st century’s most polarizing subjects: that of HIV and those affected by this disease. And to this extent, the film works wonders.

As said, the film follows Saar Maoz who has trouble reconciling with his family back home. In fact, Saar’s father cannot come to terms that his son is gay, and the rest of his family accept that fact, but in turn cannot accept Saar’s recklessness that led to him being affected by one of the most devastating diseases in modern history. And thus, Saar lives two lives: one in London, where he enjoys spending his time as a member of London Gay Men's Chorus; and another in Israel, where he is constantly put under pressure because of his sexual orientation and also the fact that he’s infected with HIV. And so, while residing in his hometown, there are countless discussions taking place revolving around the issue if Saar is allowed to be near his family because of his illness.

For those looking to brighten their day, this wouldn’t be the preferred go-to film that much is clear. Who's Gonna Love Me Now? deals with several heavy subjects in a genuinely honest way, which is to say it doesn’t cut corners when it comes to what’s put on screen. Also, the overall look and feel of the film feels very genuine, with honest conversations of everyday people who are just looking to get by without any drastic changes in the pace of their lives or otherwise.

In light of the technical details, Who's Gonna Love Me Now? is not a masterpiece in cinematic achievement, nor does it pretend to be one. It’s shot in a documentary format, with close-ups of people giving their two cents on a certain matter, explaining how that matter impacts their lives, and hoping for a better future for them and their kin. Lightning, sound, camera work are decent and don’t detract much from the story, which again, takes the centerpiece amidst the turbulence of Britain and Israel both alike.

In the end, for those seeking to lend a compassionate hand to those in need, Who's Gonna Love Me Now? would provide you with a good incentive to do so, but only if you’re up for the challenge of sitting through some of the hardest interviews ever put to screen.