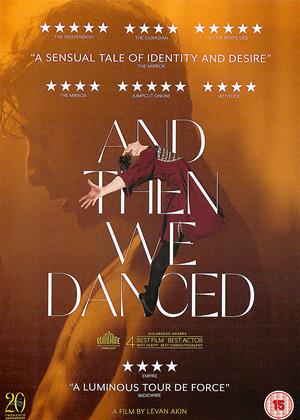 Reviews (2) of And Then We Danced

This tale of career ambition and competition in the dance world and how that intersects with same-sex love was controversial in its home country of Georgia, but quite rightly praised at international film festivals.

Merab (Levan Gelbakhiani) has dancing in his blood - various people in older generations of his family have had successful if ultimately unfulfilling careers in traditional Georgian dance. He wants to be the best - but so does new classmate Irakli (Bachi Valishvili). Gossip flies about Irakli and how he was kicked out of his former school after he slept with another male dancer. This awakens something in Merab and it's not just the spirit of competition.

This is such an assured, beautiful and sad film. How in some parts of the world same-sex desire is still taboo and how it has horrible consequences for those who feel unable to express it. It's wonderfully shot and acted and you feel every uttered and unuttered desire thanks to great chemistry between the leads. There's also a moment of emotional intimacy later on between Mehrab and his brother that's as good as that climactic father-son exchange in Call Me By Your Name. But not only that, it's also about career ambitions and how love and vocational success are not so far apart - how going your own way is ultimately sometimes the right thing for someone, if they're lucky (or talented) enough to be able to do it.

Although Georgian dancing is alien to me, the emotional power of this film makes the dancing's high drama universal. And the movie's other themes of self discovery and self actualisation are just stunningly and movingly conveyed.

I watch many world films, but this just couldn’t hold my attention. Even a film making an important message should have some enjoyment factor.