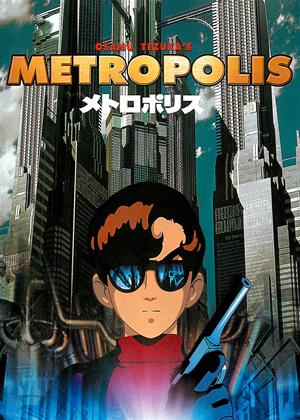 Metropolis was a film I used to see a lot hanging on the walls of my local Blockbuster. I never rented it at the time, but it always struck me with its strangely serious image of a sun-glassed boy standing tall among looming skyscrapers. Growing up to learn it was an animated remake of Fritz Lang's classic heightened my scepticism, but the film is an excellent example of how remakes can be made.

Visually, it's all Lang, but the actual story is based on a popular-manga (Osamu Tezuka's) eponymous series. The film orientates around a city set in the far reaches of space. This 'metropolis is so advanced that it ranks as the crown jewel in the solar-system. In charge though is a despot called Duke Red, who's harvesting a future robotic leader to take the city to the next level (Tima). The film orientates around the grand old Duke's aim, but is more about Tima herself; specifically her relationship with a young boy (Kenichi), and how they discover the overt political problems at the heart of the city-state.

Metropolis bears a lot of the best characteristics of the Ghibli movies - that it's enjoyable for a child or an adult. The visuals are excellent, and it retains an important message about progression, technology, and class-division. Much of this was apparent in Lang's film too, and while it's not completely unique, Rintaro's revels in its use of combining social-metaphors with visual excess. There's even something of Blade Runner and Ghost in the Shell in its reflection on the relationship between humans and robots - not as pronounced but there.

My son who is 10 though it was rubbish. I found it inventive in places with great background and secene drawing but not so sure about the figures