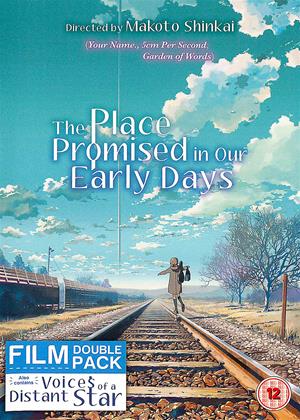 The Place Promised in Our Early Days (2004)
Hiroki, Takuya and Sayuri are two young boys and a girl living in Aomori, the closest province in Honshu to Hokkaido. These three young classmates become fascinated by the gigantic yet mysterious tower that they see across the Tsugaru Strait, promising that one day they will build and fly an aircraft to the tower to unravel its mystery.
Voices of a Distant Star (2002)
A young pilot named Mikako volunteers to be sent on a journey through space to join the fight against a hostile alien race. Leaving behind the man she loves, her only means of contact with him is via text message, which take longer to reach him the further she travels from Earth.
Directors:
Makoto Shinkai
Producers:
Yoshihiro Hagiwara, Makoto Shinkai
Voiced By:
Jessica Boone, Matthew Crawford, James Z. Erivayer, Jacob A. Gragard, John Gremillion, Illich Guardiola, Andy McAvin, Lesley Pedersen, Kira Vincent-Davis, John Swasey, Carl Ruthers, Kalob Martinez, Mariela Ortiz, Andrew Love, Mika Shinohara, Makoto Shinkai, Sumi Mutoh, Chihiro Suzuki, Donna Burke, Adam Conlon
Writers:
Makoto Shinkai, Steven Foster
Aka:
Kumo no mukô, yakusoku no basho / Hoshi no koe
Studio:
Anime Ltd
Genres:
Anime & Animation
Countries:
Japan

One of those films with multiple and complex ideas all surrounded by a science fiction world and wrapped up in a simple love story. But don't let the last bit put you off because even the love story is very heavy with complexity. So much so that a quick repeat showing of the film may be worth the effort. On the surface the film is simply about struggle. A World, its people and the mystery that we need answers to. Even in the World of Science nothing is what it seems. If we can dream then why can't planets dream? Complex enough for most people. A fascinating film with plenty of ideas. Or just a good yarn about identity and loneliness. Well worth checking out.

The Place Promised in Our Early Days / Voices of a Distant Star (aka Kumo no mukô, yakusoku no basho / Hoshi no koe) review by Adrijan Arsovski - Cinema Paradiso

Both The Place Promised in Our Early Days and Voices of a Distant Star come across as mandatory works for everyone to see at least once, regardless if you’re a fan of hand-drawn animation or not. If you are, then you’re in for a treat of colossal proportions that would leave you yearning for more.

Makoto Shinkai’s masterpieces finally saw the light of day with a double Blu-ray release that was long since overdue. His breakthrough of course came with Voices of a Distant Star – an eponymous half-hour short which he produced, directed and DREW all by himself on a single laptop. His talent was so obvious that he was immediately given a studio to work with and produce the next big thing in Japan.

Voices of a Distant Star, albeit carrying a simple story, was poignant, beautiful and everything in-between those two adjectives. Sure, you can sense a director-in-development who’s pulling the strings behind curtains, but it quickly becomes irrelevant as the feature draws you in both emotionally and visually in its very believable sci-fi world. Which couldn’t be said for many contenders of a similar verisimilitude. Simply speaking, Shinkai’s first attempt at animation is his most honest at conveying a bond between two distant lovers.

Now that that’s out of the way, let’s talk The Place Promised in Our Early Days.

The second, longer work is equal parts cyberpunk and fantasy sci-fi which takes place in an alternate universe Japan where the country has been divided between the Northern progressives and the Southern nationalists. Meanwhile, the latest breakthroughs in science has led to building a massive tower in the middle of Hokkaido in order to research the almost mystical, hidden science behind the reality of parallel universes.

Again, even if the plot is rich with science fiction jargon and hard-deciphering techno babble – it’s not really about all that. Instead, the story follows a boy and a girl torn apart by a seemingly never-ending war between the two newly sprung factions of Japan. The convention of Sci-Fi only serves as a vessel from which mostly human stories are told, and Makoto Shinkai uses this to the best of his advantage.

The Place Promised in Our Early Days plays very similar to Voices of a Distant Star, with few exceptions: the world within its characters is richer and feels more vibrant; bigger story leads to bigger twist of events; and finally – the violence is presented in such a way that it feels hyper real, so when a character gets hit – he truly feels hurt.

Finally, both Blu-ray features are more than decent enough to be watchable even after so many years from their initial release to the world.