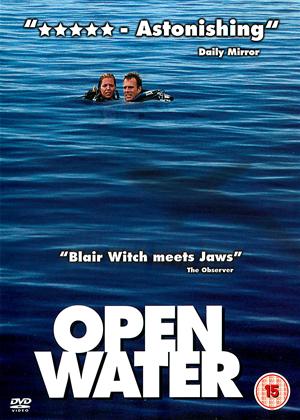 Synopsis:
15 miles from land. One million square miles of ocean. No one knows they're missing. Daniel and Susan are about to embark on the dive of a lifetime - an underwater tour of the Caribbean. But when the couple surface, the dive boat is nowhere to be seen. Cold and miles from land, Daniel and Susan soon discover they're not alone... as isolation and terror set in, the fight for survival is on. While they turn to each other for support, Daniel and Susan can't help but fear for their lives, and begin to question their fate at the hands of their tormentors...
Actors:
Blanchard Ryan, Daniel Travis, Saul Stein, Michael E. Williamson, Cristina Zenato, John Charles, Estelle Lau, Steve Lemme
Directors:
Chris Kentis
Writers:
Chris Kentis
Studio:
Lionsgate Films
Genres:
Thrillers

I saw this film when it was first released. It had been showered with excellent reviews and awards and so I sat down in eager anticipation to view it. As the first minutes of the film past I wondered if I'd been sent the wrong DVD and had instead received a cheesier than usual porn flick. I had the right film but that initial impression never subsided and the horribly wooden acting and convoluted film-making transformed what was touted as an impressive docudrama into a cringe-making disaster which I couldn't wait to end. If the sharks hadn't got them they should have been shot for their abuse of the acting craft!

You know I was expecting something completely different to what I got. It was boring from start to finish. Low budget with out any style Just pure boredom. Two actors floating around in the water for 79 minutes and that's your lot. Absolute rubbish.

not for the faint hearted - Open Water review by CP Customer

This movie was so gripping I was too yellow to finish watching. If you like getting scared out of your wits I reccomend it, if not, steer well clear.

Well shot , very good direction to give a excelent feel of realism to the whole film.

I was really looking forward to seing this film but it was incredibly slow - mostly two people bobbing around in the water. Very low budget and not good acting - sorry; the story is amazing and the factual reality of their situation is shocking and scary. Sadl (in my opinion) the film completely failed to grab and we kept fast forwarding.

12 hours (or so it seems) of 2 people bobbing up and down in the water.... blink and you might miss those shark fins

Disappointed with this film as had high expectations of it. Poor acting and a bit boring. If it was not a real story then it would have nothing to recommend it.

A story without a story - Open Water review by CP Customer

If someone recounted this story the conversation would last 3 minutes. The film is 76 minutes too long - dont do it.

All At Sea - Open Water review by CP Customer

Susan (Blanchard Ryan) and Daniel (Daniel Travis) jet off for a stress-busting holiday in the Bahamas. However on a scuba diving excursion they're left behind in the open water of the ocean. Naturally it's not long before they are blaming each other for their predicament, whilst the audience are left to ponder just what sort of dreadful tour company these people booked their trip with. Please… do they not provide safety equipment? No compass, no torch, no whistle?

The exposition is painfully progressed by 'man with clipboard', which includes numerous shots of him tallying up the number of passengers (wrongly) and of the two empty spaces on the boat. Still whether this piece of risible direction is more annoying or not than Susan and Daniel's agonisingly slow realisation that they have indeed been left stranded is debatable. And that the film is presented in such a forced and unnatural fashion made me question whether director Chris Kentis was ever awake at film school.

Open Water is filmed on hand-held digital cameras and one might assume that this would give it an edgy, gritty feel and at times it does. But watching the first half-hour it's so shoddy that you'll feel as though you're simply watching a home video of the couple's, mundane, holiday.

Ryan and Travis are convincing throughout and this is Travis' debut, but considering that the most demanding part of the film for them was pretending to be scared of, what were in fact real, sharks their performances can hardly be considered Oscar-worthy.

Kentis must have realised that Open Water had amazing potential to be a tension-filled thriller. Yet up until the point where the sharks finally arrive for dinner he wastes this excellent, if slight, premise. Even when a curious shark does take it's first bite Kentis senselessly cuts away to an entirely unnecessary scene and completely destroys any tension and fear that he'd been building up. That he never really manages to sustain any real tension is a real shame, although the conclusion is shockingly good.

Nevertheless, for sixty minutes Open Water is all at sea.