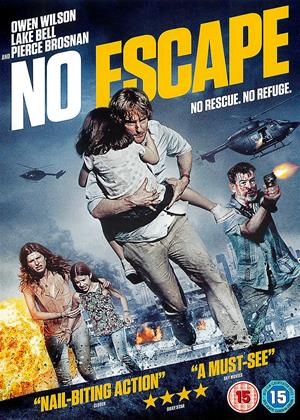 Reviews (3) of No Escape

Totally gripping and awesome - No Escape review by AS

This film will have you on the edge of your seat from the moment the uprising begins. Owen Wilson is superb in his role and there is no break in the tension. Some distressing scenes but this film should be number one on your DVD list.

Brilliant, very enjoyable and action packed throughout! - No Escape review by CS

It's nice to see that most of the best movies of late are not the overhyped blockbuster hollywood style at all, most of which have been really big let downs, but the more modest movies such as this one! Owen and his family move to a new un-named country in South East Asia, next door to Vietnam, and accidentally get caught up in a political coup d'etat. What follows is an adrenalin pumping, action packed film which will keep you riveted to the screen and on the edge of your seat all the way through. The direction, script and acting are superb and even Pierce Brosnan delivers a strong turn as the political agitator and family saviour! Without giving too much away, the plot isn't deep or meaningful, but it is well thought out and executed. I thoroughly enjoyed watching this film and thought it was one of the best films I've seen this year so far! This is a 15 certificate for good reason, there is a lot of violence, but that's because the film is showing a realistic and lifelike version of what could and does happen in these type of explosive political situations. If you're the type of person who enjoys a well thought out, action movie, with a spine, guts and a conscience, then this one is definitely for you!

Harrowing stuff - No Escape review by AS

Simplistic narrative, but well executed action all the way. Only weak point is Brosnan who pops up unaccountably at odd moments without adding anything to the plot, looks like he was shoe-horned in just to add another 'name' to the poster; and what on earth was that accent? Irish? Cockney? Australian? Wilson was more than capable of carrying this on his own. Good to see him shucking off his usual chirpy chappie persona. Sparky direction, if a tad slow at the punctuation points, keeping you held right up to the will-they-won't-they-make-it closing moment.

Extremely naive and over-simplified, without proper established sense of directions, time and space against which the characters ought to accordingly act, No Escape is a predictable, monotonous, straight-forward mess of getting from one point to another without knowing as to where said point actually is. It’s devoid of any suspense or thrills, introducing bastardized geopolitics that won’t hold up even if presented in a high-school classroom, junior year.

Owen Wilson and the gorgeous Lake Bell move with their two girls to a distant country, referred to by an unlikely expository figure played by Pierce Brosnan, as simply ‘Asia’. The audience is not given full disclosure as to where this ‘Asian’ country is, although it heavy reminisces Cambodia and/or Thailand. Right off the bat there’s confusion in regard to the narrative chronotope, which could’ve been easily solved by simple random fictional naming of said territory. The viewer feels as lost as the characters in the film.

The two main leads give decent performances, and quite surprisingly, Owen Wilson proves his talent for drama and fast-paced action. The girls are cute, the Asian extras (beg my pardon for exploiting the film’s taxonomy) are convincing, and Brosnan feels like a pale shadow of the former glorious 007 days – probably only there to collect his paycheck and vanish into the sunset without leaving a trace. The action starts decently enough to intrigue one’s attention, is interesting up until a certain high-point, but then goes to a downward spiral never to come back again. No escape is a B-movie minus the thrills, devoid of any internal or physical logic, for that matter. Sure, it’s entertaining at times, probably more suited for the 90’s era of action flicks where a single dude mops the floor with a constant influx of poorly trained henchmen. That doesn’t stop it from being predictable and dumb to a point of becoming stupid.

Let’s talk more story. It feels like Owen’s character, together with his family, is never in any real danger: they manage to break free from even the trickiest of affairs – jumping across impossible gaps, randomly stumbling across the places they ought to be, avoiding bullets like it’s no one’s business. Apart from few scratches and bruises, they pedal through a full-blown military coup, with every native Asian (sorry again) wanting them dead, as if they were wearing an invisible cloak of immortality. Oh, wait a minute: such cloak exists in reality, and it’s called ‘shield of plot’. Brosnan’s role is larger than a mere paycheck however, for he is literally a deus-ex-machina that constantly hovers over Wilson’s family and shows his face only when said family falls in grave danger.

The background motivation is as silly as it gets: a) Western corporations want valuable resource from third (in the movie referred as forth) world country; b) Foreigners agree without exposing Westerners’ ill intentions; c) Westerners exploit said country, impose impossible debt and keep TWC subdued; d) TWC goes mad and starts killing everybody in sight. Somewhere along the ending there’s a blatant attempt to slap irony onto an already failed spell, which ends up as yet another plot hole to be explained in the near future.

To conclude, No Escape would’ve been a decent action film, if not for the foolish narrative, the total lackluster of a proper chronotope, and finally -- the unwarranted appearance of deus-ex-machina Pierce Brosnan.