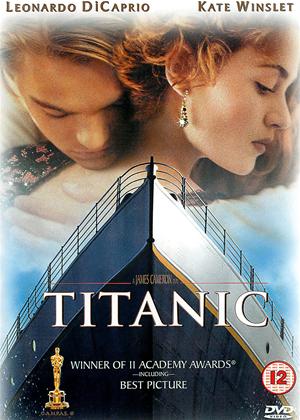 Enjoyed it the first time round and still enjoyed it all this time later . A well made film with great acting , it tells just one story of many of the sinking of the Titanic.

Titan-sic! - Titanic review by AM

It's good this. It's not as amazing as it gets credit for, though. And that CGI (which in its day WAS simply mind-blowing), looks like something the Oliver Twins put out on an Amstrad in 1987 in comparison to modern day cinematography. But that just shows how far CGI has moved on in the past 23 years, and you can't really criticise Titanic for that. And the end scene of the sinking of the ship, is still frankly jaw-dropping in its scale and realisation.

But the story itself, and I'm sorry to say the dialogue and much of the acting, is pretty poor. Hammy the Hamster himself couldn't have hammed it up more even with some honey-cured ham in his big ol' cheeks.

But overall, the scope of the filmmaking, genius of the cinematography for its time - gives this a favourable overall review. And you get to see Kate Winslet's norks.

Three things about seeing Titanic as a child: it made me take up sketching; Leo made me realise I'm 2 percent bi; and it taught me about class. Like many I participated in the inevitable Titanic backlash, probably in some failed attempt to ingratiate myself with other hypermasculine boys my age, and probably because I felt I’d outgrown it with Power Rangers and Pokemon. But by 2005, when the film received a special edition DVD, I’d realised, hang on, no, James Cameron is a bloody genius, and Titanic is masterful, despite some clunky dialogue (do not play a drinking game with the lines “Jack” and “Rose”). I’ve even formed an opinion on whether Rose dies at the end or not.