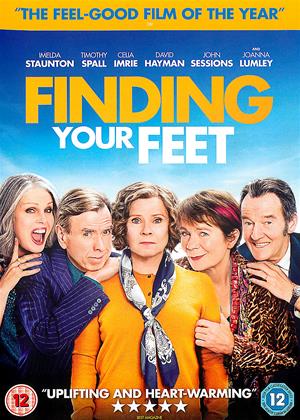 Reviews (20) of Finding Your Feet

I was a bit concerned that this might be a wincing disaster, but no, I was wrong. While it starts a bit slow it steadily sucks you in until you're intrigued to find out what happens next. The plot throws you around from laughter to sadness, but it just works. This could so easily have gone so wrong, but a superb cast and some tidy editing bring it all to a very satisfying conclusion. Make sure you have some tissues around btw, but don't worry, it's mainly for the laughter and the wonderful sentiment.

Not the best use of the old pals. Maybe too many oldies at once? Lady in van worked well. One top player at a time may be a good rule?

Vagaries of Life - Finding Your Feet review by KW

A very enjoyable film with a stellar cast highlighting issues as one grows older and societies acceptance of them. A stellar cast made this film watchable and such were their performances it would be inappropriate to single any one of them out as they were all so pivotal to the film.

Better than expected - Finding Your Feet review by JM

We enjoyed it. I thought it was going to be rubbish...didn't have much hope... but was pleasantly surprised. A gentle British comedy with an excellent cast.

Very enjoyable viewing, with a great cast. A little smultzy in places, but eminently forgivable. I really enjoyed it.

This "watch & enjoy every scene" film is a current example of British film making, at it's best. So good that I wondered if the actors had been chosen first & then the script was then written around them to give us examples of perfect casting. The slimmed-down Timothy Spall is better than the former"family-sized" version.

It's my habit, when I've really enjoyed a film, to sit right through the closing credits. In this case I was emotionally moved by the long closing song. If I told you it's title it would be a sort of "spoiler" so I'll just tell you that it's beautifully sung by Elkie Brooks who, like Timothy Spall, goes on getting betterer & betterer! (There's a version of it on Youtube but it's been shortened so doesn't carry quite the same level of emotional pull.

Excellent British cast wasted on a predictable, boring and not very amusing script. Maybe I'm not the target audience and can imagine people 65+ perhaps finding more in it than I did.... Possibly, judging by the other reviews here.

Better than I feared - Finding Your Feet review by RC

Having seen some really trite movies with 'star casts' of ageing actors I admire, I was half-expecting this to be a lavender/marigold/book group/mishmash. However, the script had some welly and Imelda Staunton and Celia Imrie played sisters with gusto. Can't say it was a great film, despite its predictable ending it was heartening and I enjoyed it.

Liked all the actors in this movie with Celia Imrie the star of the show. Good storyline and lots of humour to add to the mix.

Okay, the story is sweet, predictable, a bit contrived BUT it stars some of the best UK actors and is a showcase for not so young actors. All of the leads are actors I throughly enjoy watching. Basic message is love and friendship. Good sorbet movie between heavy fare.

Great cast, a film of real life, true friendship, full of emotion! A film you can enjoy with your family and not have to worry.

I suppose it was only a matter of time before we saw veteran actors Imelda Staunton and Timothy Spall paired up in a cozy mid-life crisis romance. It’s been a rising subgenre over the years of a quirky comedy where men and women who feel their best days are behind them find that they can still have fun, dating and dancing with a youthful spirit that remains strong. The most you can hope from this familiar formula is that it doesn’t tread down misguided alleys of misfire humor. Thankfully, Finding Your Feet plays itself safe enough to be a pleasing romp of older actors making the most of their cuteness.

It’s a loose story that is open enough to allow Staunton some wiggle room to work her charm. She plays a woman who is bitterly devastated to discover that her husband has been cheating on her after all these years of marriage. After the divorce, she feels lost and unsure of what to do with her life, even with her sister played by Celia Imrie providing emotional backup. After struggling to find a new path, she stumbles into a dance class for the elderly. There she meets a somewhat shy Timothy Spall who is going through a similar bout of loneliness when his wife has lost her memory and doesn’t recognize him anymore. He falls for Staunton but doesn’t reveal he’s still technically married, saving that bombshell for the quintessential near-climax reveal.

The story proceeds with a light enough pace to provide a decent balance of the charming and the tragic. When Staunton first discovers her husband’s affair, she is devastated but also explodes into a rant of calling out those who have wronged her. When she falls, we fill for her enough that her eventual outlet after retirement of flash mob dancing and stage productions of showcasing how old people can still bust a move feel warranted. Grimer aspects are treated with grace and dignity, as when Spall struggles to connect with his frightened and forgetful wife and Staunton makes a tearful discovery of one of her best friends succumbing to cancer.

What I found most interesting about the film with how it makes us come around to its concept. From the moment Staunton divorces and spots Spall in dance class, you can pretty much set your watch to how this will all play out, including the ending sequence of her finally running to her true love occurring right on schedule. But that almost seems to be a given of the older-scaled romantic comedy game. And like all romantic comedies, it’s less about the construction and more about the characters. And Staunton and Spall are pretty darn cute as a couple.

Finding Your Feet manages to find a firm grounding of familiar steps to present a capable enough romance for the older crowd. It never goes out of its way to be embarrassing or slapstick-heavy with its comedy, taking care never to go too offensive or too smaltzy. And for marching to a familiar beat, it’s hard to deny the charms that only such accomplished actors could muster from a script so light. Don’t expect this film to wow you or knock you off your feet for the talent assembled but be glad they can still deal out drama and comedy as well in a film that provides such lacking proportions.