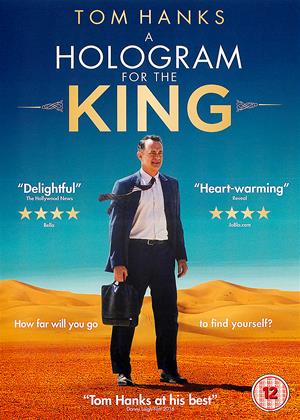 Rent other films like A Hologram for the King

Reviews (4) of A Hologram for the King

Excellent first 2 mins. - A Hologram for the King review by NC

Bit of a mess after half way. At the end what happened to the Dutch lady, the team?? More importantly, the Charles Grodin lookalike driver, with whom Tom has a rapport, and who a lot of the film revolves around, just evaporates, and we spin around to the lady doctor. The whole point of being in Saudi is lost, Tom looks younger than has done of late, but agent got wrong film for him, or editor left it all on cutting room floor.

Not for me.. - A Hologram for the King review by JJ

Not for me was bored silly trying to watch to the end, stupid storyline. I love Tom hanks so was very disappointed.

Having lived in the Middle East and knowing quite a lot about Saudi Arabia, much of this film resonated with me, particularly the first half. Indeed, as other reviewers have noted, I found the first half to be pretty good - well set up, and both amusing and enlightening - even though the second half loses its way somewhat.

For anyone who does not know the Middle East at all, though, I am not sure how this film would go down. Even the first half would then seem pretty lame and daft, and the much less successful second half would be almost a complete write off.

My point is that so much that is in the film is TRUE of life in Saudi, BUT for someone who does not know the place or culture, it will come across as stupid and uninteresting.

So, sorry if this does not help much, but my advice would be to watch it only if you have some knowledge of the Middle East and the culture. Then it can be reasonable fun.

This starts well - it's the usual fish out of water storyline wherein the Tom Hanks character - an IT manager - is sent by his employer to give a presentation in Saudi Arabia. Lots of fun ensues, with a great taxi driver character and some sharp dialogue and funny lines. The contradictions of this dictatorships are explored well, without any hectoring or arrogant American approach.

And so it goes on. But it all starts to go wrong when an odd health condition the Hanks character has means he has to go and see a doctor. S female doctor (this would NOT happen in Saudi by the way - they keep the sexes so separate there that the government censors even black out all pictures of women in English text books!)

The final third of the film is so awful it's almost unwatchable - it all becomes a Mills and Boon Arab fantasy in reverse (think Rudolph Valentino's The Sheikh with gender role reversal).

Of course, this may not be the fault of the director or writer because this is based on a novel by Dave Eggers.

Still, a director or film writer should have knows this would never work - if the film has stuck to the 'fish out of water' story, it would and could have been a funny satire on Saudi Arabia.

Sadly, it goes all al-Mills and al-Boon and I lost the will to live by the end.

The 2 stars are for the great first half.

A Hologram for the King review by Adrijan Arsovski - Cinema Paradiso

A Hologram for the King is a fun film that overstays its welcome somewhere across the half-point mark, when its innocent plot steps into preachy territory carrying all pre-established weight onto further events that [SPOILER ALERT] I will not spoil. The clash with Arabic culture not only helps Tom Hanks’ mannerisms, but it applauds his effort to innocently and discreetly propagate whatever his agenda allows – and fortunately for us this time it’s a satirical reflection of days long gone by in a life of a single human being, who also happens to be a failed salesman lost somewhere in Saudi Arabia’s vast deserts.

This time we see Tom Tykwer at the helm steering a ship that very much differs from his previous works like Run Lola Run or Perfume: The Story of a Murderer for example. His flair to give soul to everything he touches is present here as well, and to a certain degree it adds complexity to a somewhat straightforward movie-going experience. That is not to say that Tykwer has lost his touch – it’s rather his touch has changed for the ‘weirder’ and the ‘more ‘preachy.

Lots of moviegoers have compared A Hologram for the King with Sofia Coppola’s ‘accidental’ masterpiece Lost in Translation, and one can say they’re not very far off. In actuality, they’ve struck a chord – only this time A Hologram for the King shared nearly all flaws that plagued the 2003 Bill Murray feature, and little to zero of its perks.

In actuality, A Hologram for the King tries to directly lift parts of Lost in Translation in the form of a mid-life crisis, a chronotope that is unfamiliar to the main protagonist (which he must overcome and defeat) and meeting a woman who becomes a romantic interest within said time and space.

Also, at time it feels like the director developed the movie’s premise and stopped right there and then. “A failed salesman goes to Saudi Arabia to sell his product in a final effort to overcome his existential angst of ending up spending the rest of his life alone”. The twist is that Tom Hanks’ character meets someone and you have the whole movie wrapped up in a mere sentence or two. Has Tywker lost his touch? Hardly so, but then again: it all boils down to plot and proper storytelling, which A Hologram for the King severely lacks thereof.

One thing worth mentioning over and over again is Tom Hanks’ acting. After all, he’s the friendly baker, the charming ice-cream vendor, the everyday man who acts as a tribune conveying the thoughts that all think, but few have gotten the courage to actually speak. Given this fact, he executes his role perfectly and is charming as he always was.

A Hologram for the King comes off slow, copies parts from another feature and hits you across the head with its preachy message until all you can see is coarse sand that gets everywhere. However, Tywker’s originality paired with Hanks’ charisma is pushing this one just across the edge and for this fact alone I personally would recommend you give it a try.