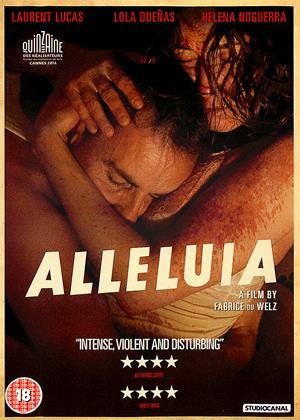 Synopsis:
Michel is an serial womaniser and professional hustler. When he meets Gloria, she falls in love with him, just like the others. But this time, things will be different. Gloria finds her reason to live in Michel. Their love is passionate; limitless. When Gloria discovers Michel's hustling, she becomes his accomplice rather than risk losing him. Together they embark on a wild odyssey that becomes deadly and murderous. Their unfettered passions will drive them to the brink of insanity...
'Alleluia' is the adaptation of a news event which shook the United States from 1947 to 1949: the story of Martha Beck and Raymond Fernandez, lovers and serial killers, whose infamous murders earned them the name 'The Lonely Hearts Killers'.
Actors:
Stéphane Bissot, Lola Dueñas, Édith Le Merdy, Anne-Marie Loop, Laurent Lucas, David Murgia, Héléna Noguerra, Renaud Rutten, Philippe Résimont
Directors:
Fabrice Du Welz
Producers:
Clément Miserez, Vincent Tavier, Matthieu Warter
Writers:
Fabrice Du Welz, Romain Protat, Vincent Tavier
Studio:
StudioCanal
Genres:
Drama, Horror, Thrillers
Countries:
France

Another exercise in suffering from Fabrice du Welz! (Spoilers...) - Alleluia review by NP

Director/writer Fabrice du Welz really has become a name to look out for. He seems to deal with, and delight in, punishing, murky human misery – and if there is a horror element in there too, the more successful his vision is! In this follow-up to the grim ‘Vinyan’ from six years earlier, his appetite for the bizarre and the grim has not diminished. Every visual here is plastered with a fug of clammy, grainy atmosphere – every pore exposed, every blemish displayed.

The story, however, comes second place by quite a distance. That’s not to say the premise isn’t fascinating. Nice, shy Gloria (Lola Dueñas) is coerced by a well-meaning friend to put herself forward for a date with online lonely-heart Michel (Laurent Lucas). To begin with, it seems Lucas is an uncaring villain, only interested in sex and money. His hostile treatment of Gloria’s little girl is testament to that. Gloria, for her part, seems instantly blinded by love into stupidity, eagerly entrusting this new man with her finances and family. It seems Michel is every bit as bad as he seems, and that Gloria wants to join him in his unscrupulous adventures. After a while, we have to ask ourselves – who is the more unstable of the two?

The film is told in four acts. The first sets up the plot as outlined above. The latter three follow three of Michel’s money-fuelled seduction/murderous crimes – all of them foiled by Gloria’s violent jealousy. These three episodic stories follow the same path and ultimately seem to go nowhere. The finale, when it comes, doesn’t seem to have solved anything.

The story is based upon real-life criminal duo, the Lonely Hearts Killers. It is a pity there isn’t at least some sense of closure at the end, other than Michel realising how unhinged Gloria is – as we, the audience, have already seen for ourselves. Purely from a business point of view, Michel can’t have conned any money out of the potential victims he has seduced because Gloria does away with them all in a succession of mad frenzies (in one memorable scene, she stops to sing some tender love song – into which bleeds the incidental score - before getting down to the business of sawing the limbs of her first victim. It’s quite a moment).

The Belgian/French thriller boasts some extraordinary performances, especially from the two little girls – firstly Gloria’s daughter, whose innocence and isolation is told entirely through her eyes. Secondly, the daughter of Solange (Héléna Noguerra), who we meet in the final chapter, delivers some extraordinary moments, vocalising her intense dislike for the unscrupulous Gloria. You should have listened to her, Solange!