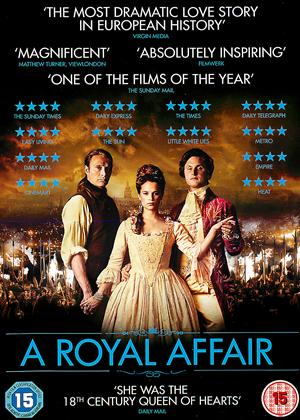 Reviews (6) of A Royal Affair

More than a mere costume drama, this is a part of our history that I was unaware of before watching this superb film. Search Wikipedia for 'Caroline Matilda' and read all about it...

At age 15 HRH Princess Caroline Matilda, daughter of the Prince of Wales was married off to her cousin, King Christian VII of Denmark. The film is a dramatisation of her relationship with Christian and her affair with the royal physician, Johann Friedrich Struensee.

Both Caroline's brother (George III) and her husband suffered from mental illness - and the film depicts Struensee taking advantage of Christian's illness to advance his ideas influenced by 'The Age of Enlightenment' then sweeping across Europe. Not unexpectedly this met with considerable opposition from both Court and Church, with unfortunate and deadly consequences.

The film is in Danish with subtitles, although there are a few words in English. The subtitles are hard to read, but bear with it...

This film is brilliant! It may be 2 hours long but I was never bored and never looked at my watch once! It knocks the spots of pretentious royal dramas like Young Victoria or Mrs Brown. It is the best foreign film of 2012, IMHO.

It is in Danish and occasionally German with subtitles (my ONLY criticism is of these - which are white, so which don't show up well whe a snowy landscape is on screen!) But it's only a minor quibble. In general, the subtitles do their job adequately enough.

This film is very well structured and written - unlike so many dull historical and royal dramas (which wallow in the sparkle of historical monarchs) - and the tension is kept up throughout.

The acting is first class - though the Danish actors are all unknowns.

The scenery is delightful too, and the direction captures the era well.

And the story itself is fascinating - and one I did not know (not being well-read in Danish history).

I would award this the prize for best foreign film 2012. I might award some of the actors Oscars too.

In a word: BRILLIANT!

Anyone who has missed this movie is in for a delightful surprise!

Five stars out of five.

Good while it lasted - A Royal Affair review by BE

Sumptuous settings, easy on the eye and a story from history I was not fully aware of. I felt some sympathy for the very young queen and the trauma she experienced during her very young and short life. Not so her physician who, apart from the queen, appears to have behaved quite irrevantly towards everybody around him. Mikkelsen Boe Folsgaard is excellent as the insane king. Mads Mikkelson as the physician is also very good. (Note reviewer PV above is incorrect about the Danish actors being unknown. Mads Mikkelson is one of Denmark's best exports, having a string of awards to his name including a 2014 Oscar for The Hunt). I found the movie held my attention, was very impressed with how the final scenes were presented but for all that, will probably soon forget about it.

Beautifully made story and educated me as I had not studied this part of history. King Christian was well portrayed and his madness played out well. Heart wrenching story of the young queen pushed into marrying him and finding elicit love with the King's physician. Beautiful settings, well told story and captivated me throughout.

Bit frustrating with the continuous swapping of languages but do stuck with it, it's worth it.

House of Denmark - A Royal Affair review by CH

These days Denmark keeps a quiet profile. Apart from a few grisly TV cop series and Mads Mikkelson we hear very little about the machinations of those Scandi flat lands. So this film fills in a few gaps between Macbeth and The Bridge. Like any Bluebloods there will be weak indifferent Kings, with madness thrown in for good measure. And the men that guide or befriend those Kings will find themselves in the rising deep waters of political tides.

Excellent film-making. The historical setting is beautifully recreated and the drama which unfolds is as gripping as a thriller. Denmark in the 18th century was still an old-fashioned monarchy. King Christian was psychologically disturbed and unfit to rule, but the system was not designed to cope with such cases. The result was a struggle between the aristocrats who wanted to exploit the king's weakness for their own purposes and some representatives of the Enlightenment who coax the king along the path of democracy and concern for his subjects. The acting is first class, creating truly believable characters, and the script is intelligently written to produce a wide variety of moods and scenarios - the pathos of the young queen, the drama of court scheming, the beginnings of an illicit romance, the optimism of Enlightenment ideas, etc. The film is in the same category as Ridicule (by Patrice Leconte?) which, by my standards, is very high praise indeed.