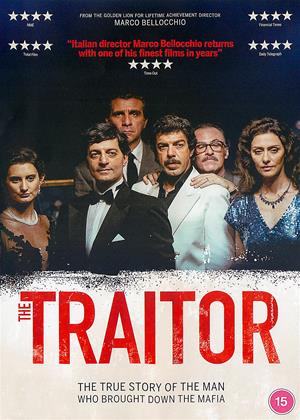 Reviews (2) of The Traitor

This Italian film (it was a pan-European production) is about the life of Tommaso Buscetta, reputedly the first Sicilian Mafia boss who decided to 'talk', i.e. tell Judge G Falcone what he knew about Cosa Nostra, thereby becoming a 'pentito' -- a label T Buscetta nevertheless always rejected.

The movie is well-made, convincing, and interesting; I enjoyed watching it, even though it is very long (2 1/2 hours). The realistic atmosphere is what makes it captivating: it feels quite 'real' from start to finish, and the life of the criminal underworld is not glamorized to any degree.

What is lacking, however, is a certain tension, paradoxically; I would not say the film is flat, but it does not grab us as much as it could have, given the subject matter. It is odd, in fact, and I am not sure why that is the case. Maybe, it has to do with a style that is somewhat academic and painstakingly factual to the point of being prosaic. The other thing that is missing is some in-depth understanding (or description/ analysis) of the main character's motivation in deciding to spill the beans. On one level, it is quite clear (he feels Cosa Nostra has betrayed its roots and traditional values, etc.) but, on a deeper level, it remains an enigma, to a large extent. Why did he decide to co-operate with Judge G Falcone? What really happened between those 2 that persuaded T Buscetta to collaborate? This aspect is dealt with in a fairly superficial manner.

In conclusion, it is a very good film, in my opinion, and I recommend it, but it is not the truly great movie it could have been.

Gripping and interesting - The Traitor review by MM

Previous reviewers have described the characters and plot. I found the film an informative and gripping view of a criminal world - pulling few punches - and the court scenes are particularly compelling (superbly acted). Certainly a film worth watching.

Traitor takes aim at Tommaso Buscetta, the Italian mafia man who became best known as the man who talked to bring down the many criminal underworld cohorts. He seemed to have a cushy life within the mafia. He had children. He had a plush estate. He made money and power. But Tommaso was known fool as his career in crime continued. He saw the writing on the wall with his son being addicted to drugs. He is aware this life cannot continue. He can sense it coming to an end.

Rather than fight back against the justice system as some sort of loyalty to the men he associated with, Tommaso decides to speak out and reveal everything about the mafia. Doing so will label him as a pentito, a man who has betrayed his brothers in organized crime. They’ll holler for his blood in court and try to do everything in their power to take him out. Speaking out could mean the end for Tommaso and his family. But, then again, so could staying within the mob, as numerous assassinations and prison sentences were carried out even before Tommaso was arrested.

Pierfrancesco Favino plays Tommaso with a great deal of depth. We can see the weariness in his eyes as he voices truth between cigarettes while chatting with a lawyer about spilling all he knows. We can see the sadness spew from his eyes when he realizes his son has been murdered and realizing that there’s so little he can do if he submits to this plea bargain. There’s great concern in his mind for taking on a new life as well as deep fears of his own mortality. Yet he continues on to do the right thing even if it mostly means throwing away his cushy lifestyle and his security.

Tommaso’s life is not an easy one. When in court, he is literally surrounded by other mafia members in cages that grit and gnash their teeth in dismay. Tomasso can’t stay quiet while making these claims. He must face them head-on. This is best seen during a scene where Tomasso speaks with another mafia leader and constantly calls out this spinning mobster as being a hypocrite that is being dishonest and trying avoid confessions that will damn him and the mafia.

The film runs 2.5 hours and most of it is intriguing and compelling enough. The courtroom scenes in particular, which one would think would be the most boring part, are surprisingly the most engaging and exciting. Considering this is a film with assassinations and exploding cars, that’s saying something. Every courtroom scene feels chaotic, passionate and shocking. Thankfully there’s more of this than the rest of the pictures meandering around numerous aspects of Tommaso’s life that have hills and valleys. Some of it is interesting the way Tommaso contemplates purchasing a gun as something to clean and pass the time, perhaps using it on someone who gets too close to his family. Other aspects feel unneeded, as when we dip into Tomasso’s dreams about dying, delivered in a Christmas Carol sort of way with Tomasso lying in his casket and being forced into the ground. Did we really need all that when we can clearly see the terror within his eyes?

At any rate, The Traitor mostly gets the job done of presenting the conflicting mindset within Tomasso that led to a longer life than his more dangerous associates. There’s some introspection here and there as the picture jumps around time and showcases crime’s draining qualities that simply can’t last for as robust as its organization may appear. Of course, much of this seems like a repetition of previous gangster picture but it helps to keep that portrayal going of how crime really doesn’t pay in more ways than just financial.