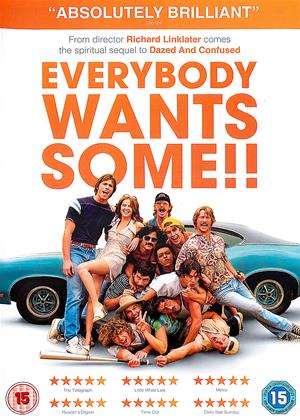 Reviews (4) of Everybody Wants Some!!

Who the heck cares? - Everybody Wants Some!! review by MD

This is a film about the experience of starting college (uni) in 1980s America. As someone who went to university in the UK in the 1980s, all I can say is that only about 5% of it mirrors my experience.

Richard Linklater used to make really different and interesting movies (The Before Sunrise/Sunset/Midnight trilogy, for example), but this is an absolute dud. Period.

Dull - Everybody Wants Some!! review by cm

I had been looking forward to this movie based on positive reviews and Richard Linklaters previous movies. However, this is quite possibly one of the dullest films I have had the misfortune to waste and evening on. It is rare that I have to turn a movie off half way through but it was just to difficult to see it through.

This is great...but only if you're a teenage lad. - Everybody Wants Some!! review by EP

I can't see that this film would appeal to anyone but a teenage lad.

The story is pretty much non existent, the characters are two dimensional and do not develop.

It's really just a story about some young college lads who are part of a baseball team just as they join their first year, but don't get excited or dewy eyed about that pre-text, this is simply a snapshot of young adolescents getting drunk and high whilst trying to chat up girls, what teenage lads do I guess but really there's nothing else to comment on.

The film does capture the era showing the style and music with reasonable production values but otherwise not recommended.

Awful - Everybody Wants Some!! review by SW

Selected this as I have seen previous Richard Linklater films, I especially enjoyed Boyhood.

I am at a loss to see how this got positive critical reviews. An utterly pointless film with no redeeming features. College boys doing vaguely offensive stuff, couldn't make it to the end of the film.

Everybody Wants Some!! review by Adrijan Arsovski - Cinema Paradiso

Everybody Wants Some!! is an honest, event-less piece that draws its strength from an era when questionable fashion choices, silly facial hair and Greek letter sororities were all the rage. And most certainly some will find Linklater’s movie boring to hell and back, but for everybody else who aren’t afraid to enjoy their healthy dose of 1980’s life - Everybody Wants Some!! will dig up those memories and put them on a pedestal for all to appreciate.

Richard Linklater is notoriously known for pushing the ‘realism’ genre above all else: his last few movies being either contemplations of life itself (Boyhood), or a thorough misunderstanding of your average unsuspecting couple in Before Midnight. Everybody Wants Some!! surely continues this tradition as Linklater tries to near in on the reality of the heated college way of existence.

In this regard, Everybody Wants Some!! plays mostly like a spiritual successor to Dazed and Confused – not just shedding light onto the tradition, but building upon the 90’s jock near-masterpiece in all ways possible. Also, being a ‘borrowed’ title from one of Van Halen’s smash hits – the film’s nostalgia surely battles its way amongst those old enough to have experienced it first-hand back in the day.

As said, the story is not much. Talented pitcher Jake (played by Blake Jenner) comes to live in a neighborhood where he partakes in a dichotomous environment: decrepit VS modern architecture, freshmen VS seniors, old VS new way of doing things. Soon, Jake finds himself engulfed in what college offers, and together with a bunch of friends – he starts the initiation to finally grow into something more than just booze, sports and parties.

What director/writer Linklater flawlessly succeeds in is building a piece that feels as if it were filmed right then and there, as opposed to most period films which feel like the label they’re so hard trying to avoid. In continuation, we have actors that feel comfortable in the roles they portray, as one criticism will be directed toward the underdeveloped female characters that stand as nothing more than additions to their male counterparts.

Furthermore, the soundtrack adds to an 80’s feel with some rock sounds thrown in for good measure. Cinematography is decent in a Linklater-y way, but nothing that will knock your socks out or anything of the sorts. Atmosphere, if you can call it that, elicits those all-too-known butterflies residing in everyone’s gut. A certain message that rides the movie’s fins mostly aims toward identity and searching one’s place in society – nothing we haven’t seen in movies with similar tropes and conventions.

To finalize this up, all I can say is that Richard Linklater has nailed real life yet again, with his movie magic skills that somehow overshadow most of his contemporaries by a significant stretch of margin.