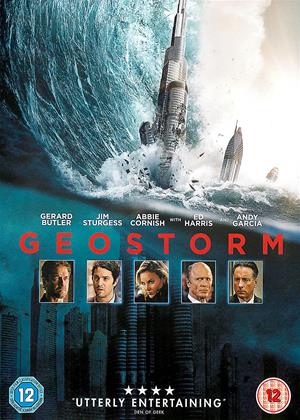 A disaster of a movie - Geostorm review by DG

I'll keep it brief. I love disaster movies but this was a dull, uninspired lazy movie and was not even saved by the movie 'climax'. Almost gave up half way but saw it through to the bitter end in the hope it would redeem itself. It didn't! More like a made for tv disaster flick really.

The scenario behind this had the potential to develop into something quite interesting, but sadly this ends up turning into yet another average eco disaster movie, relying far too much on CGI, than script, acting or direction! The sideline of a divorced dad struggling with his daughter and brother relationship, corrupt politicians, megalomaniacs and greedy saboteurs is nothing new and has been done a thousand times already. The film makes a very poor attempt at being multicultural and global when in fact it is just another America saves the world routine, which by now has become a much parodied cliche! A good family film to watch on a Sunday afternoon, but nothing new, special or creative with this one, just more of the same, as we've come to expect from such disaster movies.

Not even laughably bad - Geostorm review by Alphaville

What do you want from a Gerard Butler disaster film? Well, a disaster for a start. The title promises such but it never arrives. How about action? Well, there’s precious little of that too. A global warming control system is malfunctioning and Gerard spends the whole movie trying to find out why. He’s also saddled with parenting issues (yawn) and sibling rivalry with his brother (yawn, yawn).

What we end up with is an underpowered plot, clichéd dialogue and prosaic direction by woeful writer/director Dean Devlin. There are a few flash-bangs in the final half-hour, but none are exciting or surprising. An attempt to up the tension with a countdown-to-geostorm finale merely highlights the lack of imagination on show here. Will Gerard save the world? Will the family be reconciled? Will there be cheering? Will you feel nauseous?

I do enjoy watching disaster films some have been great like The Wave, Day after Tomorrow, even 2012 was ok but Geostorm really was scraping the bottom of the barrel, so many bad sequences & stupid plot. Just remember kids if you have a virus in your computer just reboot it!

Feels like a re-hash of a number of 'much better' disaster movies. Screenplay is weak and lacked any form of tension. Effects OK which just about raise this film from a 'made for tv' movie. As always, Gerard provided some gravitas to the film but couldn't save it from a very justified low score of 3. I got to the end and it wasn't painful!

A disaster in itself - Geostorm review by AW

Oh dear, what can I say? Not many movies are this deathly dull and the acting is shockingly bad. Gerald, what on earth were you thinking, getting involved in this? For much of it we wondered if it was a spoof, but no, it’s just horrific

My partner spent the entire film saying what was going to happen next, causing much merryment. Yes, its that predictable.

Did this film even have a writer or director? It looks like it built from some 'how to make a basic appeal to everyone film' Template.

Its just terrible. I rented it hoping for some awesome extreme weather special effects. These were few and far between.

This is one properly bad film, that sadly treats itself like a some sort of blockbuster.

All i can say is thank the lord for Cinema Paradiso. I can chalk this up to experience and rent something from the 80's or by a proper director to make up for it!

Why all the bad reviews??? - Geostorm review by VP

Why all the bad reviews? I have enjoyed the movie. Yes, some cliche dialogues, but they are in almost every American movie. Little far fetched, but all of this type of movies are. Acting was good and disasters scenes too. I do not think it was stupid at all after watching it. If it really was, I will not remember the plot in a year from now. I will see then.