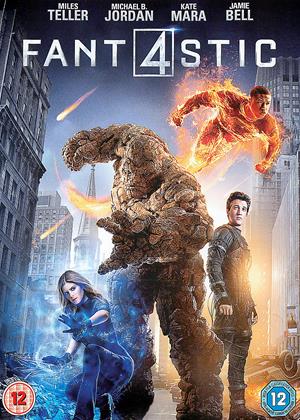 I enjoyed this film. But I think it isn't as good as the other two before it. I think the first two the actors and characters were better and so was the story's. Not really sure why they had to reboot again.

Look close and you can see the faint glimmers of a superhero picture that aims to be original and unique. There was clearly some intent with Josh Trank’s Fantastic Four to be something more than just standard superhero material. Whereas other superhero pictures of recent years aim for fluffy farces or dark grit, Trank shot for a movie that would be strangely weird and horrifically engaging based on the iconic four. It’s just too bad we never got to see that picture.

Before I lay into this picture after so many critics have already savaged it, I feel that I should preference my review by stating that this is one of best Fantastic Four movies to date. Though smashed into pieces by a combination of Trank’s direction and Fox’s involvement, a handful of the shards reflect a much better movie. Elements of the picture in its first two acts resemble something that could build into a unique horror picture. It treats powers of the iconic four as though they were a frightening metamorphosis akin to The Fly. If a scientist found himself with stretchy limbs or the ability to turn invisible, I doubt their first thought would be to fight crime.

For ? of the movie, our heroes are given a lengthy amount of backstory. We see the path of Reed Richards (Miles Teller) leading up to his scientific breakthrough from garage experiment to grant winner. Around him and his experiment forms the genesis of the heroes and villains. Ben Grimm (Jamie Bell) tags along as Reed’s best friend and muscle. Johnny Storm (Michael B. Jordan) is established as a street-racing bad boy, not one to listen to his science-obsessed father Doctor Franklin Storm (Ray E. Cathey). His adoptive daughter Sue (Kate Mara), however, is much more obedient to her father and his work. Victor von Doom (Toby Kebbell) also pops up as a jealous scientist who fancies Sue. He will take all that anger and blow up the universe or something.

As the movie slowly builds to the inciting incident that brings about superheroes, there are bits and pieces of great anticipation. Reed’s science experiment of transporting humans to another dimension for new means of resources is treated with great care and build up. By the time Richard and friends decide to travel in their dimension-hopping machine, there’s some genuine excitement about this new world. The strange elements of this volcanic alien landscape bring about the Fantastic Four in a creepy and fearful tone.

How do they learn to cope and band together? They don’t. Seeing as how the movie only has half an hour left, time is sped up to a year later. The Fantastic Four are now completely comfortable with their powers and we never get to see the progression. Doctor Doom pops up in the finale and his plans are as bland as any comic book villain. The entire third act of this movie strips out all the atmosphere and pieces of tone that was established for comic book movie autopilot. The Fantastic Four have to fight Doctor Doom and his giant blue laser from enveloping our universe. Why must it always be blue? Can’t Fox at least pretend they’re being original and make it purple or something?

In another time and another place, Josh Trank’s Fantastic Four would be one of the most surprising and alternative superhero movies of the decade. In this world, however, it’s a bitter mess. The tone is incredibly uneven, the characters are not given enough time to develop and the grand finale is the most ill-fitting of endings. Could the Fantastic Four have worked if it was allowed to shirk the current template and become a unique sci-fi/horror piece? The world may never know since Fox believes it wouldn’t be a Fantastic Four movie without Ben Grimm shouting that it’s clobbering time while he smashes rocks. No matter the story or the tone, this is what executives think the public want. And it’s that mindset that is going to hold back the subgenre from being something more.