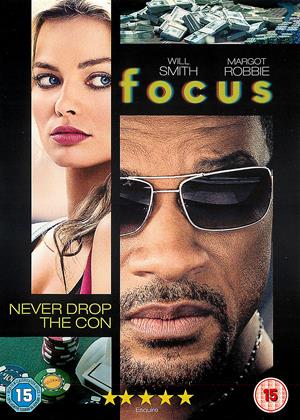 Very good great story , Good thriller loads of twists and surprises all the way through to the end , about ticksters and gamblers making money with their scams.

Slower than most films 40 years old. Will not made a decent film for years, and this one is no exception. Glorification of common criminal activity as some sort of light-hearted game. Loads of nice people robbed of their hard earned by scum. Great basis for a film?

As Will gets older perhaps should keep his multi-millions, and keep quiet, or re-jig to a higher level?

Margot Robbie, a wanna be hustler learning the ropes begs Will Smith, the king of the hustlers, to train her in the art of the con.

Smith takes her under his wing and involves her in small stuff to start, but eventually ropes her in for big plays.

He starts to fall for her, so bails out of the relationship, as there is no place for feelings of love in the arsenal of the con man.

Three years later Smith is in Buenos Aires about to pull off an enormous hustle, and who should turn up but Robbie.

I'm not a member of the Will Smith fan club, although in fairness he plays this film well and I can't knock his performance, which I thought was very good. Conversely, I'm available for the presidency of the Margot Robbie fan club, as I believe she is an excellent young actor, who puts in a cracking performance.

Haven't enjoyed a movie about hustlers so much since the sting.

Keeping with the film’s tone of conning unsuspecting victims, Focus is a showy magic trick. Coated in its sleek and stylish locations with equally attractive talent, it’s a film that’s easy to get lost in its fast pace and decadent dressing. Will Smith and Margot Robbie appear sexy and crafty the way they play each other in a cat-and-mouse game of love and greed. It’s a real visual treat for the eyes and a dazzling distraction. Though a fun bit of hypnotism, you really have to keep your eyes on the spinning spiral to be consumed by its charm. Veer off slightly from its spell and you’ll start to see how silly all its twists and turns are for the story with their frantic frequency.

That being said, it was refreshing to see Will Smith in a role that doesn’t paint him as a wholesome hero. This time he’s playing a con man, Nicky, who has become a veteran of ripping people off. So confident in his abilities that he willingly falls into the amateur traps just to test the waters. His latest fascination comes in the form of Jess (Margot Robbie), a novice of the game who woos Nicky from a nightclub to her hotel room, hoping to swipe his cash with the hired crazed jealous boyfriend who bursts in on them. Seeing some potential in Jess, Nicky decides to take her under his wing and as a sort of intern swiper. He demonstrates some tricks of the trade involving quick distraction and movement of hands to pilfer wallets.

Displaying just how cunning his skills are developed, Nicky brings Jess to a football game where she is kept out of the loop on conning a skybox big-shot. Nicky slowly starts making bets with eager Asian executive, throwing around bets that grow higher and higher each time Nicky loses. After nearly losing millions of dollars, he wins it all back with a shot-in-the-dark wager he’d been gunning for the entire time. It turns out Nicky had been playing the businessman by subjecting him to subliminal messages all day to ensure the odds were in his favor. When Jess asks about the possibility of him never choosing the lucky number planted by Nicky, he specifies that he’d continue placing bets until he won. It’s strange logic and a rather risky value dependent on human nature, but I suppose we’re meant to marvel at Nicky’s expert deciphering of human nature more than his high gamble on character.

After the latest con, Nicky throws Jess her share and sends her on her way. Years later they run into each other while both working in Buenos Aires on conning a car race. It’s an awkward run-in given how they’re both working on the same racer (Rodrigo Santoro). Jess seems to be jumping into the driver’s bed while Nicky is jumping into his engine with some mechanical MacGuffin not worth divulging. Feelings that they both agreed wouldn’t conflict with their work begin doing just that. They bat around their emotions like two stubborn kids who will most certainly end up with one another if they don’t get caught or end up dead from being caught.

This is more of a game than a narrative where the audience is constantly guessing. Who is conning who? Who is being earnest and who is just playing dumb? The twist in their motivations becomes such a repetitive element that it practically becomes a joke. What keeps the film from becoming too silly is how fast it zips from con to con. Every character involved in the caper is likable and smart enough that you want to see if they’ll succeed. Gerald McRaney is welcome support with his gruff grumbling and veteran knowledge of the game that makes him the most crafty of con-men. Adrian Martinez provides some much needed comedy as the bulky and lewd lummox who plays an essential role in all of Nicky’s schemes.

Focus is a very colorful distraction that may never hit that one high note, but it certainly never bores. There’s just enough gorgeous locations, fun characters and surprising twists to keep the attention of even the most jaded critics of capers. It runs a dangerous risk of going off the rails in the third act for how insane it becomes with the grittier turns and reveals, but thankfully cuts off the story when it has properly exhausted all its prime content. This may bring the film to a screeching halt of an ending, but sometimes it’s best to quit while you’re ahead. Or at least hit the brakes before your movie plunges off a cliff of ridiculous twists for the sake of twists.