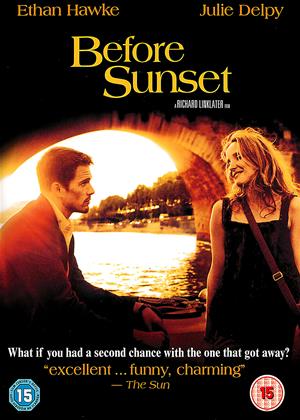 Synopsis:
Is there someone who lingers in your memory - someone who makes you wonder what might have been? Ethan Hawke and Julie Delpy make magic again, reprising their 'Before Sunrise' roles of Jesse and Celine and reuniting with director Richard Linklater (School of Rock) in this engaging tale of love and renewal. When Jesse and Celine first met in the mid 90's, their few hours together in Vienna were spontaneous and life-altering. Nine years later, lightning strikes twice. They unexpectedly meet in Paris...and have only one fading afternoon to decide if they should share their tomorrows.
Smart, witty, real and unfolding largely in real time to heighten its immediacy, 'Before Sunset' glows with the moments that are every heart's greatest adventure.
Actors:
Ethan Hawke, Julie Delpy, Vernon Dobtcheff, Louise Lemoine Torrès, Rodolphe Pauly, Mariane Plasteig, Diabolo, Denis Evrard, Albert Delpy, Marie Pillet
Directors:
Richard Linklater
Producers:
Anne Walker-McBay
Writers:
Richard Linklater, Julie Delpy, Ethan Hawke, Kim Krizan
Others:
Kim Krizan, & Ethan Hawke
Studio:
Warner
Genres:
Drama, Romance

Reviews (3) of Before Sunset

The middle part of the director's excellent trilogy about the adjustments that take place in the key stages of life. This one catches Jesse and Celine (Ethan Hawke and Julie Delpy, both treasurable) ten years after Before Sunrise. The film captures elegantly and wisely the thirtysomething condition: when enough experience has accrued to feel meaningful regret; of having to make definitive decisions, coupled with a last chance to review the decisions already made; but time enough to change. Still young, but when time first comes to check your pulse and take your temperature.

Linklater sets their conversation against the beauty of Celine's home city of Paris (reminiscent of Jacques Rivette's Paris Nous Appartient). The film is eighty minutes of dialogue, but there are no lulls. Just a developing euphoria with the joy that love and providence can bring. A conversation that leads us to a conclusion of overwhelming intent... and a tantalising cliffhanger.

Waiting to end... - Before Sunset review by CP Customer

This Film was awful.. the whole film is just a conversation... and not a very interesting one.. The whole way through I was waiting for the film to end or for something to happen...

Long chat in Paris - Before Sunset review by BP

I haven't this film's sequel Before Sunrise but nonetheless I was able to enjoy this film in isolation. I like Ethan Hawke (he was great in Boyhood) and although Delpy's character is a little annoying at times I enjoyed the dynamic between them, which is a good job because basically the film is just the dynamic between them. Paris is visually a stunning city as it rolls along in the background. I'll watch the other 2 movies in the trilogy having watched this one.

Wow, what a film! Before Sunset is infinitely better than the previous instalment in Linklater’s ‘Before’ dual features (let’s pretend the third film doesn’t exist), mostly because ‘Before Sunrise’ features two very immature characters, with limited knowledge about their place in the world (and some general world matters as well). Before Sunset follows Jesse and Celine (Ethan Hawke and Julie Delpy respectively) nine years after they first met, now Jesse being an acclaimed author and Celine an environmental activist, as they stroll through the streets of Paris and talk about, well, the most mundane things one can think of. And this is exactly where Before Sunset excels.

In many ways, Before Sunset doesn’t feel like a film, but rather like a genuine conversation between two past lovers now turned friends, with the undeniable chemistry between Ethan and Delpy keeping the momentum in constant forward traction. What’s interesting is that both Mr. Hawke and Ms. Delpy are credited as screenwriters (along with Richard Linklater and a couple of others), which is perhaps one of the main reasons why their dialogue flows so naturally and organically. In it, they can be spotted talking about their personal lives, family, children, history, potential, work, where they see themselves in the future, and more. It also looks and feels like they have immensely grown from nine years back, both character-wise and in terms of their professional lives. But it also seems as if the core of what made them fall into each other has remained all throughout all those years while they were drifting apart, living their own lives while wondering about what the other party had been brewing. Which brings me to my next point: nostalgia.

Richard Linklater is a master of nostalgia, i.e. to produce very simplistic features that mirror real life but not quite, and with that blurring the lines between art and reality, giving fiction a new thread to bear. Now, watching Before Sunset again after all those years (just like the characters in the film, and just like the actors who play them), the film mirrors real life in many ways, including growing up and maturing (perhaps better shown in ‘Boyhood’, which is the epitome of nostalgia and, at its most extreme – depression), shifting one’s own thinking, and realizing stuff you didn’t know before even existed. But, despite all of that, Before Sunset is nostalgic because it makes us experience our own mortality in real time; as we see the characters aging, we are constantly reminded of the futility of it all and how unpredictable life is at every corner of the way.

Dear Richard, you’ve made a masterpiece.