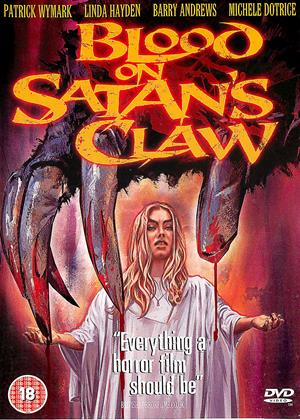 Reviews (3) of Blood on Satan's Claw

One of the great British horror classics, along with 'Witchfinder General' and 'The Wicker Man'. As an aside, none of these were made by Hammer, the best known horror studio name but who seemed to specialise in more camp offerings. Both 'The Blood On Satan's Claw' and 'Witchfinder General' were made by Tigon British, and 'The Wicker Man' by British Lion.

As far as the storyline, it goes something like this: a plough turns up an unusual skull + eyeball + fur. Soon after, a young bride-to-be goes mad and develops a claw. Young people in the village start to do nasty things to each other, attempt to seduce the local priest, and grow hair in unusual places. The local Judge suspects witchcraft and with a posse of locals attacks and kills the risen Devil. Err - that's it. All very silly stuff.

What makes this different is the atmosphere. The photography is excellent and provides an enveloping vision of an isolated 17th century English village community. The soundtrack is eerie and adds to the claustrophobic atmosphere. Linda Hayden plays the role of the ringleader of the possessed village girls and combines both provocative beauty and evil. And Patrick Wymark plays the role of the Judge rather well [Aside: he died shortly afterwards at the untimely age of 44].

As pointed out by the previous reviewer, although Hammer is the studio that springs to mind when you think of British horror films from this period (or indeed any period), their less prolific rival Tigon had a very different style which has aged better. After their unexpectedly big hit "Witchfinder General", Tigon naturally wanted to follow it up, but, since the villain had very definitely died at the end, a direct sequel was impossible. Instead, they came up with a completely unrelated film along similar lines, though with the major difference that, this time around, the arrogant, ruthless witchfinder is not a hypocritical madman, and the Satanic presence is 100% real.

What stopped it from being a true five-star classic was a very unfortunate executive decision. The movie was shot as a series of separate episodes in which the same events were seen from the perspectives of different people. Then, once filming had been completed, the studio decided that approach was too unconventional and edited the footage into a standard movie with only one narrative, which of course changes direction in jarring ways and loses track of the person you thought was the main character at regular intervals. Also, the climactic scenes were apparently watered down because the budget was running out, so the ending doesn't quite pack the punch it should. And you can't help feeling that they could have spent a bit more on the monster costume.

Apart from that, it's one of the very best horror films of that era, and still packs a real punch today. The central theme of the burgeoning sexuality and casual cruelty of children being warped and perverted is in fact even more disturbing from a modern perspective than it was then, and the film is nowadays almost unshowable on TV, though it used to be a regular late-night treat on BBC1. Bearing in mind cinematic conventions of the time, we're clearly meant to accept that the young people mostly played by actors in their twenties were, as the way they behave at the start of the film suggests, 14-16 years old at most. Linda Hayden was only 18, and Wendy Padbury, an ex-Doctor Who companion who never appeared in anything like this ever again, genuinely looks about 14, though she was in fact 23. Which makes everything that happens more disturbing by far.

This is definitely one of the top ten movies that deserve "cult" status but for some reason don't have it, and it's a lot better than at least half of those that do. Watch out for a lengthy sequence which, with added slapstick, was pinched in its entirety by "The Evil Dead II". The original version of that scene is just surreal nightmarish horror, made scarier by the fact that at this point in the movie we don't know why it's happening. So, for a few minutes at least, this 1971 film is almost identical to "The Evil Dead II", only scarier. In fact, that particular scene was deemed so scary that American prints darkened it to the point where you could barely see all the nastiness.

As British horror films entered their twilight years, there were some underrated gems released with little fanfare. This is one.

Peter Edmonton (Simon Williams) brings home his intended bride Rosalind (Tamara Ustinov). Sadly for her, aggressive snobbery is prevalent in this ‘folk horror’ – as she is just a serving wench, she is condemned to spend the night in the dreaded attic, wherein she is disturbed by something that sends her hurtling into insanity. As she’s bundled off to the bedlam by the local judge (an excellent Patrick Wymark in one of his last films), Edmonton too succumbs to the curse of the attic and chops off his hand believing it to be the appendage of a devil. At around the same time, wholesome Ralph Gower (Barry Andrews on top form) discovers a malformed skull that subsequently disappears when the authorities are alerted.

This was originally conceived as an anthology of three stories, which may explain the staggered nature of the narrative – characters come to the fore and then disappear into the background again, creating a choppy flow to the proceedings. It is possible this contributes to the film’s great feeling of unease as events become increasingly nasty and demonic.

And nasty they are indeed. Unsightly growths of animal-like hair on the bodies of the victims, the distressing rape and murder of local youngster Cathy (Wendy Padbury), and the briefest glimpse of the ghoulish demon behind it all. All this is conveyed convincingly by a tremendous cast determined to make things as real as can be.

And yet it is 17 year-old Linda Hayden who all but steals the show as the possessed Angel. Expertly flicking between innocent vulnerability and genuine sensual wickedness, it is surprising she didn’t go on to find greater acclaim as befits her talent. Rather ungallantly, Director Piers Haggard has said he had to use her because she was under contract to Tigon supremo Tony Tenser. She shares top billing, alongside Wymark, and deservedly so.

Filmed almost entirely on location in wintery woodlands, complete with a constant soundtrack of rooks and farmyard animals to heighten the lack of modernity. There is an authentic feeling that this cut-off village is a law unto its own pagan superstitions, and as such, is dangerously easy prey to legendry evil. With such an enigmatic premise, the climax seems comparatively perfunctory. Still, this is a tremendous film.