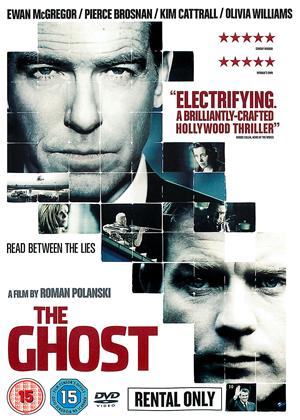 Reviews (2) of The Ghost

Enjoyable, edgy thriller in the Hitchcock style - The Ghost review by LR

This is classic Hitchcock. An ordinary guy wanders into a far-from-ordinary situation, starts investigating some odd incidents and finds himself in over his head with some powerful, ruthless characters. The suspense is skilfully handled by Polanski and the obvious comparison with Tony Blair (ex-PM wants to write memoirs but needs to excise compromising episodes) gives the story some bite. The casting is spot-on and the moments of humour provide contrast and help to emphasise the menace of other scenes. Ewan McGregor makes a good everyman lead, with his mix of cocky charm and naive bravado. Pierce Brosnan is slick and vain, like a politician, but is also anxious and petulant when events slip from his control. An entertaining story with political edge. Well worth seeing.

I enjoy books by Robert Harris ('Fatherland', 'Enigma', 'Archangel', 'Pompeii' etc) most of which have also been made into films or TV dramas [Aside: 'Fatherland' was filmed by HBO Pictures and released on VHS video, with no DVD release, so a decent copy is tricky to get hold of. It also has a *very* altered ending. But I digress...]

Having read his book 'Ghost' about a ghost writer working on the political memoirs of ex British Prime Minister Adam Lang (reputedly based on Tony Blair) and who uncovers a dodgy secret from the past, I was interested in seeing the film version.

Frankly, I felt the book to be one of Mr Harris' weaker works - and that's my verdict on the film as well: it's weak. Although it has a strong, skilled director (Roman Polanski) and Robert Harris and Polanski co-wrote the script, my view is that the actors are wrong. Adam Lang is played by Pierce Brosnan, and while Polanski gets him to act a little rather than to just look pretty, he does not come across as a credible PM. Ewan McGregor plays the ghost writer - but he's a wooden actor, and doesn't really convince. The best acting is by Olivia Williams as Lang's wife, who is creepily convincing.

I was disappointed - it's really very average stuff, so I'll give it 3/5 stars. But I was expecting better...