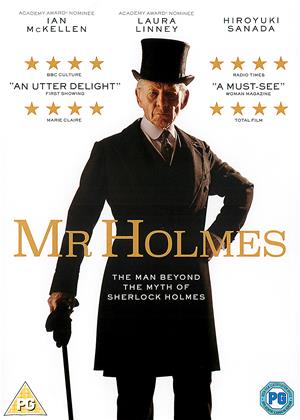 Ian Mckellen's acting appears effortless. I rather enjoyed this, but with reservations... - Mr. Holmes review by RP

I rather enjoyed this, although it is (perhaps as befits Mr Holmes' advanced years) very slow moving.

Here, Arthur Conan Doyle, the author of the Sherlock Holmes stories, has himself been written out and an alternate reality imposed, one in which Sherlock Holmes is 'real' and living in retirement with only his bees, his housekeeper and her son to keep him company. In this 'reality', the stories were written - and embellished - by sidekick Dr Watson, who changed certain details of Holmes' final case which Holmes, by reason of failing memory, cannot now fully recall. And it's the hunt for the accurate details of this final case which forms the core of the story, nicely interwoven with Holmes' discovery of a less clinical, more human part of himself rather than the grumpy, too-direct obsessive he has always been.

The film is basically a three-hander, with Ian McKellen in the lead, Laura Linney (trying hard but failing to mask a USAnian accent) as his housekeeper and young Milo Parker as her son. Despite the excellent photography, the English locations and the lead actor, this is very much an American film and it seeps through - can't we have a proper British Holmes again?

Ian McKellen is excellent and his acting appears effortless - and in so doing it shows up the other performances, particularly that of Laura Linney, who despite assorted awards and Oscar nominations is quite frankly weak and out of place. I know the film is US produced, written and directed - but couldn't they have found someone this side of the pond?

Recent Sherlock Holmes films - this, the Guy Ritchie efforts with Robert Downey Jnr and the BBC re-inventions with Benedict Cumberbatch have all been good in their way but I have had reservations about all of them. Personally I'm torn between Basil Rathbone, deerstalker, pipe and all and Jeremy Brett as the only 'true' Sherlocks for me...

Despite my reservations and its glacial pace I did rather enjoy it, so I'll give it 4/5 stars.

When the trailers I'm bombarded with before the film starts include a film that sank without trace about old people doing stuff that's surprising just because they're old, and another film which sank without trace about gay people being gay, I start to worry, because although Sir Ian McKellen is a perfectly fine actor, his age and his sexual orientation (which he manages to bring up in every single interview for no reason at all) are the two least interesting things about him. And by the way, this is a film about a man who at no point is represented as being gay. If they're trying to flog it on the assumption that gay men will enjoy it because they share its star's real-life sexuality even though this plays no part in the movie, they're really struggling!

Sherlock Holmes is 93. Alzheimer's Disease is taking its toll, but apparently you can at least partially cure this incurable condition by admitting your feelings, so that's just fine. Does this movie sound like fun yet? Sir Ian acts his heart out as a miserable and borderline senile old man ridden with angst over what might have been with the only woman he ever loved (not Irene Adler - some other lady you've never heard of until now), but that simply isn't enough, given that there are basically two other people in the movie, neither of whom can act (how long is it going to be before Hollywood catches on that "male child actor who can genuinely act" pretty much means "that kid from The Babadook"?), and maybe 5% of its running-time shows Sherlock Holmes using his amazing intellect to solve problems, as opposed to having to be helped up because he's so old that he randomly fell over, or whimpering about the one very contrived chance at true love that he failed to take.

Sorry, but this is just depressing. I actually prefer Guy Ritchie's view that Sherlock Holmes can use his exceptionally high IQ to win boxing matches (as you do), in between random visual quotes from spaghetti westerns. And I never thought I'd find myself admitting that. One extra star because Sir Ian really is doing his best. Otherwise, nada.

It is a very slow moving film about Sherlock Holmes in his later years suffering with dementia and guilt of the past. Thought the acting was great . Bit of a strange story.

I've never really liked Sherlock Holmes - because I don't believe the character or his superhuman powers of deduction (which seem to me on a par with that bloke on 3-2-1 wh0 translated absurd nonsense rhymes into meaningful clues as to what to choose to win the car and not win Dusty Bin! Anyone under 35 look away now because you won't have a clue what I am taking about!)

Holmes seems smug and grating in both the stories and the films, and I utterly despise the yoof-friendly mobile-phone-caption-spewing BBC TV version.

This is more like a TV drama - about an old 93 year old Holmes attempting to recall a case and his life. A tacked-on subplot about a Japanese herbal medicine gives the drama it's ethnic quota. Thankfully, unlike in most BBC dramas, a 1948 village has no black characters (thus reflecting the REAL WORLD). I liked the other subplot about bees and wasps more, frankly.

To be honest, Ian McKellen gives a better old man with dodgy memory and bad health performance in the classic, 5 star 'Gods and Monsters'. But this is passable and the Kent and East Sussex coast brings back memories for me.

So-so and NOT too slow-moving at all - it's a contemplative drama about an old man trying to remember his past and having flashbacks. What d'you expect? Car chases and dinosaur hunts? DOH!

This movie was not as I expected it to be. I fell asleep twice watching it but persevered to the end in the hope that it might live up to some sort of expectation. It didn't. Sir Ian Mckellan overdid the old man act and the two actors in supporting roles (housekeeper and son) were not believable. A waste of time. One star given for the shots of the lovely English countryside.

I disagree with the critics - AGAIN! - Mr. Holmes review by MD

I wonder if it's time we had a poll among members of this site: how often do you find yourself disagreeing with the professional critics? This is another film that comes with a high rating on Rotten Tomatoes, yet it really is very disappointing. What did the critics see in it? The story is a most curious affair, certainly not one that grabbed my attention and kept me riveted, and the whole link to the Holmes films/TV series we all know is tenuous at best. The acting? Mediocre. The script? A few neat touches, otherwise bland and far too prone to go off the point. Entertainment value? Low - there is really nothing in this to excite or stimulate. Ultimately, the film is too slow, too unengaging, and has nothing much to add to the wonderful oeuvre of work about this great detective. Splat - a rotten tomato indeed!

This is gentle, undemanding fare, acted and directed in gentle, undemanding fashion, more suited to a television than a cinema screen. If you don’t expect the excitement and intellectual brilliance we’ve come to expect from a Sherlock Holmes tale, especially since Cumberbatch took on the role, the film passes amiably without hitting any heights. The plot pitches Holmes as a doddery 93yo trying to remember his last case. It’s a slight story, focussing mainly on Holmes’ relationship with his housekeeper and her young son, while the old case seen in flashback doesn’t have the impact or resonance the script would like to think it has. The whole is less about Holmes the detective than a meditation on old age, regret and loneliness.

Lovely pictures of the countryside. The story is.. wait, what story? I nearly fell asleep. Save yourself 90 minutes and watch something else except if you have sleeping troubles.

Life, love, regrets and getting nearer the end. As a fan of the detective stories, I found it all very sad and moving.

Loved Jeremy Brett as Holmes and felt this could have been him in later years.

Avoid if your after 'action packed'.

A strange idea, Sherlock Holmes with dementia, filled with guilt and regret, has retreated to a life of bitter recluse. Only Ian MacKellen could have pulled this frankly ridiculous drama into any other than a stuporous bore. He does an old man pretty well, not just by being quite old himself but by further subtleties of gesture and gait. Recommended only as a masterclass in acting but not as a drama.

There's a lot to admire in this film, the settings, the imagery and photography and the acting are all finely balanced and executed, but it just didn't work as a story. Or to be precise, three stories.

There are three threads to the story, one is the relationship between Holmes and the housekeeper's young boy which if you've seen the Werther's Original TV adverts you will have caught the entire thread stretched out throughout the film. Charming but limited, the TV advert definitely had the edge.

The second thread is the previous visit to Japan by Holmes on a mistaken errand. No plot there as it's a bare sideline, nothing happens and it's nothing to do with the rest of the film apart from obtaining Prickly Ash extract for his memory. Visually pleasant but irrelevant.

The third ( and main) thread is the case involving a troubled young lady and a white glove. I listened intently to this thread but still couldn't work out what it was all about, it was presented in a very vague and broken manner, with hushed and secretive dialogue that it became obscure to point of annoyance, especially as what appeared to be the central part of the plot(s) were lost to us viewers.

If it all made sense to the film makers then I am sure they must be proud of their efforts, but for us poor viewers it was all a bit of a mess and a lot of nonsense.