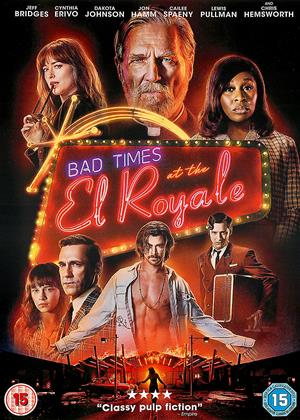 Rent other films like Bad Times at the El Royale

Reviews (14) of Bad Times at the El Royale

It is hard to see where it is all going at first but it gets twisted and complicated and ultimately very enjoyable .

Crime of many kinds all lead to the El Royale Motel .Robbery ,Kidnapping,Cult Murder,Drugs,Gambling,Blackmail,Porn,Politics and Soul.

A Great Cast and Unusual Characters make for an Interesting and Thrilling Caper .

Worth more than a second Watch. and some Great Music .

Told from multiple perspectives in an overlapping time frame, revisiting the same event from different points of view, this was an engaging film which was at times shocking in its use of unexpected violence. The film starts with different characters turning up at a hotel that has its share of secrets, and plays out in the different rooms occupied by the guests. Jeff Bridges is superb - as ever - and the quality of the acting and cast (Jon Hamm among others) kept me engaged throughout. Weird it absolutely was, but in an entertaining way. Good fun.

The first thing to say about this film is that it's too long at over 2 hours, like so many Hollywood movies.

This has got rave reviews but I found it tiresome the longer it went on. It's al a dream fantasy really and desperately tries to squeeze in too much incl racial politics (yawn!), cult leaders like Waco, the FBI, an armed robbery backstory, feminism, child abuse, Motown, Viet Nam, religion, and even a hinted-at JFK element. Too much really. This could and maybe should have been 2 movies - the cult scenes later on could be a different film, frankly.

It's watchable and does have surprises and plot twists aplenty. But what it reminds me of really is an Agatha Christie whodunnit. And the end is pure Hamlet. Reminds me too of that Tarantino movie set in a hotel with vampires.

Doesn't start very promisingly, you think it's going to be one of those films where self absorbed characters do nothing of any note. But you'd be wrong! It gathers momentum with plenty of twists and turns and some excellent acting. Surprisingly enjoyable!

I loved it ! - Bad Times at the El Royale review by AB

Wow interesting film .. Starting to think is this worth me staying up to watch , but i highly recommend this film . Twists and turns all the way .. Not what i expected , jumped out of my skin a few times .. Not for the faint heart! We loved it

So many interesting angles in this film. Starts like a play, then becomes semi surreal and then flips into the Hateful Eight and ends predictably but no less enjoyable for that.

Loved it. Bridges and Ham were great and Darlene’s voice was sensational, although her part was difficult to believe even in 60s Nevada/California but hey I didn’t live there at that time, so what do I know. Watch it.

This film didn't go where I expected but was an interesting watch.  I thought it might be, because Jeff Bridges is a great actor and I'm sure he can pick and choose his parts.  He doesn't disappoint in this.  The soundtrack is terrific but the film's overlong, and I got a bit bored towards the end - not sure what Chris Hemsworth added in the final part of the story, but as always he was nice to watch!  Recommended, but pay attention to all the flashbacks.

Bad Times has high production values. Set, apart from the somewhat flashbacks, in the remote motel on the California - Nevada border, the sets and acting are so believable. There characters were kept very tight so that no one actors dominate the screen. Chris Hemsworth played against type and was frightening a hell. The feel of realism was enhanced by by accident and unintended consequences.

A very interesting film. I knew nothing about it at all apart from who was in it.

A really good film from start to finish, with some great acting too. At times slow but on no means in a bad way, kept my interest all the way through.

Read a few good reviews regarding this so decided to view - the film is based around a hotel set on the California/Nevada state border which has seen better days, a group of characters stay in separate rooms all with a secret to hide or a past life connected to the hotel. A sequence of events bring them together regarding a heist, FBI intelligence and a sister being kidnapped by her older sister (I won't give anymore away). It has an old style feel about the thriller (certainly at first), rather slow paced with plenty of dialogue and the ambience of the hotel set probably in the late 60's or early 70's of a nostalgic theme and the performances from Hamm (Broadbeck), Bridges (Priest Flynn), Erivo (Darlene Sweet), Hemsworth (Billy Lee) and Pullman (Miller) were all spot on but unfortunately there were red herrings a plenty in the writing and some unanswered questions, you never get the feeling of any tension and the climax a little contrived for my liking, and parts left hanging in the wind i.e. who shot the fella at the start of the film?...unlike some of the above reviews I was hoping to see a decent twist relating to the hotel or even the concierge who was basically running the hotel by himself but it never really came and just ended up in a shoot up, felt a bit of a let down after the character development. 3/5

Drew Goddard’s Bad Times at the El Royale is a stew of dangerous characters with some hints of Tarantino flair thrown into the pot. It has its old-fashioned style of the 1960s, a visual flair for its unique location, an all-star cast of quirky actors, and plenty of violence bubbling over in its tale of intersecting lives. And while the film certainly spins quite a few stories ala Pulp Fiction, it just doesn’t quite have that gripping sensation to be as strong of a film.

The premise is still a unique one. Several different visitors have arrived at the El Royale hotel in 1969. Jeff Bridges plays a Catholic priest with a welcome smile that comes through his big beard. Darlene (Cynthia Erivo) is a nervous soul singer who tries her best to keep to herself. Dwight (Jon Hamm) is a vacuum cleaner salesman so talkative he needs to cram some coffee in him as soon as he arrives. Emily (Dakota Johnson) just seems like a hippie of the era that shoves others away with plenty of profanity. None of these characters, however, are what they seem.

Sure enough, everyone at the hotel is there more or less for one dirty reason or another. Some have a dark past they’re trying to run away from. Some have committed a crime and are trying to lay low. And some have a mission that needs to be completed. Even the hotel clerk Miles (Lewis Pullman) is clearly hiding some darker secret when initially setting the stage for the visitors. To keep things fresh, I’ll refrain from divulging the true identities of these characters and what exactly they want, but it’s less for spoilers and more for getting through the advocation of style over substance.

While there is certainly a Tarantino inspiration to be sure, it’s more within the construction than the writing. We see multiple perspectives of different characters that are broken into chapters and all of these intersecting stories climax in a big and bloody shootout. It sounds like Tarantino, but if it’s really heading down this path it’s missing a key component in great dialogue. Characters talk an awful lot in this film, but it more or less comes off as quick and blunt displays of ideologies and emotions than any grander personality quirk.

But let’s not be so hasty in comparing Goddard to such a filmmaker and take the film for what it’s worth. Credit where credit is due, the El Royale hotel is elaborately staged for some tense moments of gunplay and hostage-taking, as well as showcasing the shadier side of the establishment. The flashbacks have some flair to them and the brutal exchanges have a certain grit as well. There’s a bit of a freewheeling nature to how the film jumps around from different angles that it certainly won’t bore with its vivid nature.

The Bad Times at the El Royale has a certain allure of elements that have a familiar sensation despite the somewhat original aspect of its throwback nature. It never quite reaches the heights of an exceptional thriller. There’s a lot going on that the film is more pleasing for its elaborate nature than the delivery, considering how the twists become so frequent they lose their punch. It’s not a bad time. It’s not exactly a great time either.