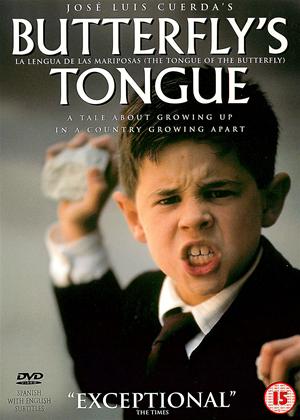 Sign up
What Have I Done to Deserve This?

This is what cinema is all about. The story of a boy in the years before the Spanish nationalist revolution. Such a good film. Not one bad actor, every scene utterly credible, touching.

Butterflies’ tongues curl up like the spring in a timepiece, shooting out to collect nectar from a flower. So explains the elderly school teacher, Don Gregorio, seeking to inspire his unruly boys to open their eyes to the wonders of the natural world as spring brings the opportunity to study outside in the forest.

This is a visually stunning film which evokes both the richness and the narrowness of small-town life in Galicia, Spain, in the year leading up to Franco’s military coup against the secular Republican government in 1937. The dense texture and slow pace of everyday life – the women washing clothes on the riverbank, a farmer stabling his donkeys in his kitchen, where rabbits appear at his young guests’ feet and a hen flaps inconsequentially onto a high shelf during dinner – is beautifully evoked. The carnival where the whole town appears disguised in fancy dress to dance to a jazz band captures the sweetness of the peaceful life the impending civil and world wars will rip apart.

We follow a year in the life of Moncho, a boy starting school late after illness. Conversations with an older brother reveal how exceptional the education is that Moncho is receiving – there are continents! different races! – no Australia isn’t “somewhere in America.!” The opening of this young minds threatens the Church, whose teachings Moncho’s uneducated mother (his father has taught the sick child to read) regurgitates uncritically (“atheists are bad people, all good people believe in God”). Teacher Don Gregorio’s failure to use corporal punishment brings contempt in the eyes of the local Mr Big, and his refusal of a bribe (of hens) to pay extra attention to his lazy rich kid leads to eventual retaliation.

The film is not a Merchant Ivory style nostalgia fest, but a very political work perhaps now even more topical, as right-wing populism and religious fundamentalism are on the rise, than when it was made in 1999.