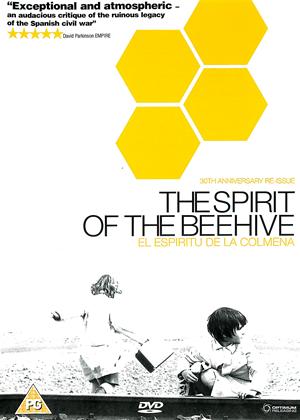 Synopsis:
Made under the Franco regime, Victor Erice's astonishing 1973 feature debut is quite simply one of the most remarkable, influential and purely poignant films to emerge from the 1970's. A bona-fide classic of European cinema, the film brought Erice instant and widespread acclaim. An audacious critique of the disastrous legacy of the Spanish Civil War, The Spirit of the Beehive is set in a rural 1940's Spanish village haunted by betrayal and regret. Following a travelling cinema's screening of James Whale's Frankenstein, seven year-old Ana (the mesmerising Ana Torrent, later to grow into an international star of some standing) becomes fascinated with Boris Karloff's monster.
Obsessed with meeting the initially gentle creation, she transfers her entrancement to tending a wounded army deserter. Atmospherically rendered by legendary Director of Photography Luis Cuadrado, it's impeccably performed by both Torrent and veteran actor Fernando Fernan Gomez in the role of her emotionally scarred, bee-keeping father. Existing in a highly evocative dreamlike state, it's a powerfully symbolic, richly allegorical tale that is as unique as it is beautiful.
Actors:
Fernando Fernán Gómez, Teresa Gimpera, Ana Torrent, Isabel Tellería, Ketty de la Cámara, Estanis González, José Villasante, Juan Margallo, Laly Soldevila, Miguel Picazo
Directors:
Víctor Erice
Writers:
Víctor Erice
Aka:
El Espiritu De La Colmena
Studio:
Optimum
Genres:
Drama
Countries:
Spain, Drama

Reviews (3) of Spirit of the Beehive

Eerie and Atmospheric - Spirit of the Beehive review by Mehitabel

I finally managed to watch this film twenty years after being told I should!

Its principal characters are two small girls, Isabel and Ana, and I have to say right at the beginning that they are wonderful. There is nothing remotely cutesy about them, and they are never for one second wooden or self-conscious. The youngest, in particular, has a still-centred naturalness that is a large part of the reason the film works.

Not a lot happens. The movie is an account of a few days in the girls' lives: They see - very significantly - the film "Frankenstein" in the local barn. They go to school. They play. They exchange secrets and theories under the bedclothes. They ignore - or do they? - the frosty relationship between their parents which means they are largely left to their own devices. They play tricks on each other. One of them has a strange, haunting adventure. It's giving nothing away to say, think of "Whistle Down the Wind"...

For me, despite the beautiful photography which brilliantly conveys different times of day and the hugeness of the space surrounding these two small girls, it was the sound that conjured up the atmosphere most effectively: The crackly film in the barn, the buzz of bees, the footsteps echoing through the melancholy, rambling mansion where the children live, the wind on the Sierra, the splash of a stone landing at the bottom of an old well, the children's voices, hushed and solemn, discussing the world in the dark...

There are points when a modern viewer might get impatient (which is why I rated the movie an honest 4 overall). The pace is not snappy. But that serves a purpose and the movie stays just on the right side of being over-indulgent. The adult cast too are excellent, particularly the childrens' father (very much older than he would be in a modern film!) whose sad withdrawal from the world into the sanctuary of nature and animals has rubbed off on little Ana.

The teacher who told me to see it twenty years ago was right!

Did Not Appeal - Spirit of the Beehive review by OM

Gave up after 30 minutes.

Slow and obscure - Spirit of the Beehive review by GF

The photography has been rightly praised and gives a memorable picture of the wide almost empty landscapes and the simple houses of the more arid parts of the Castilian plateau. The acting may also be good, although this is difficult to judge unless the actors'roles are more clearly defined than they are in this film. But that is not nearly enough to make this a good film. The plot is very thin, with many unexplained actions and incidents which create an unnecessary air of mystery. The film is very slow, with many shots, particularly close-ups, held for far too long, as if the director was unable to find any speech or action that would clarify his intentions. (And why on earth are the little country girls so often shown with obvious lipstick on ? Someone should have told the make-up artist that he was overdoing it.)

We are told several times about the lives and habits of bees, but if there is such a thing as 'the spirit of the beehive' it seems to be singularly lacking in the people of this Spanish village. The supposed references to the Spanish Civil War are also hard to find. If this film was considered a classic of the European cinema in the 1970s its reputation has dwindled since then.