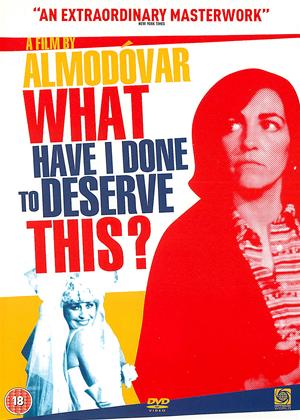 Rent other films like What Have I Done to Deserve This?

Reviews (2) of What Have I Done to Deserve This?

Almodovar spares no mercy - What Have I Done to Deserve This? review by DF

At the very start of this movie the main character, Gloria, walks across a town square being filmed by a crew as she walks into her own movie; this is an important marker. Gloria, played perfectly by Carmen Maura, is another of Almodovar’s female characters who is almost sinking in a suffocating, classist, patriarchal society. Yet, somehow, she manages, against all the odds to attain her self-liberation, but not in a triumphal or sentimental way. Gloria ultimately gains freedom by administering a well-practised blow on the nut of her loutish, delusional husband. Gloria lives in the milieu of what appears to be a very dysfunctional family, yet all of them (apart from husband), granny and two very ‘independent’ sons are sympathetically treated well observed characters and they, like Gloria, are survivors in the tough world that they find themselves in. There are some very interesting neighbours and although they are somewhat exaggerated; the ‘heart-of-gold’ sex worker and the mother who doesn’t want to be a mother, all add to Gloria’s somewhat fragile support network! Almodovar spares no mercy for the movie’s menfolk. They are loutish, schemers, tasteless, impotent and in the main, ridiculous (well, it is an Almodovar movie). Almodovar’s Hispanic take on satire and irony can at times be a little heavy-handed and the comedy, whilst funny, can be a bit gratuitous. I did, however, enjoy the scene where the kid magically redecorated the apartment!

I haven’t seen all of Almodovar’s movies, but I put this one as my favourite so far and I certainly recommend it.

A word or two about reviews. I fail to see any use whatsoever in the sort of so-called ‘review’ which proclaims a movie to be ‘slow, dull, rubbish’ with absolutely no critical appraisal be it negative or positive. Such comments do not comprise a review, they are merely a lazy opinion.