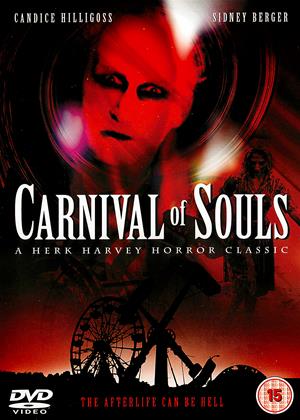 Reviews (4) of Carnival of Souls

This is a modestly budgeted, black and white film directed, produced, written by and starring Herk Harvey. Often, when an entire production is placed in the hands of one person, the results can be questionable, with no-one available to advise the auteur that his ambition may need fine tuning. Happily, this is far from the case here. 'Carnival of Souls' has gained a huge cult following over the years, and quite rightly: it is excellent.

Beginning very much in the style of Hitchcock's 'Psycho (1960)', the narrative follows Mary Henry (Candace Hilligoss) as she stumbles from the sea after a car accident in which she appears to be the sole survivor. Trials and tribulations inevitably follow as she finds it difficult to continue her normal life, and her challenges in forming any emotional attachment - although having said that, her pursuer, greasy, arrogant John Linden (Sidney Berger) is an unpleasant, bullying character who doesn't disguise the fact he only wants to have sex with her. She sees figures, spectres, faces - the main ghoul is played, uncredited, by Harvey. His is the face most people remember from the film: pale, blackened eyed and leering, his is a truly unnerving presence.

The direction is first rate. Not only is a seaside town given a genuinely unnerving atmosphere, but the finale, filled with stuttering, staggering undead figures emerging from the abandoned carnival stays in the mind long after the credits have rolled.

If you have an interest in horror, you owe it to yourself to see this.

Toccata and Refuge - Carnival of Souls review by CH

“These old houses creak as much as my knees.” So a landlady tells a young and fetching church organist (Candace Hilligoss) who has rented a room in a small town after, apparently, surviving a crowded automobile's plunge from a bridge into a river at the beginning of Carnival of Souls (1962).

Created and directed by Herk Harvey, who appears throughout as a ghostly figure, this film, rendered in effective black and white, does not succumb to gore but is continually unnerving, not least with the man (Sidney Berger) across the landing, a warehouse functionary creepily set upon deflowering her: he arrives at breakfast time with a jug of coffee laced with spirits (as it were): for which she supplies the wonderful term of “germkiller” (all this,after a classic bathtub scene).

Within and without, the film is stark, scantly populated. How many people know of it? How did it come to be made? Little funding was available, and yet it echoes across six decades, partly driven by music which riffs upon that modest church organ to summon the stuff of nightmare.

The best truly independent film ever made. It cost $30000 and was made guerrilla style in the street with hand-held cameras by a five person crew. But the director creates a virtue of this circumstance. Maybe the audio and overdubs aren't professionally recorded, but their strange resonance just makes the film more detached and dreamlike. If Herk Harvey had spent his budget processing the sound to give this effect it would have been money well spent.

Some young adults drive off a bridge and emergency services can't recover the car in the muddy river. Hours later, Mary Henry (Candace Hillgoss) pulls herself from the water. She travels to a new town to work as a church organist, but her reality has distorted. Sometimes, people don't see her, or she doesn't hear them. At dusk she begins to be attracted to a desolate closed down amusement park where grotesque, ghostly apparitions congregate and freakishly waltz.

Carnival of Souls looks like the horrors of German expressionism. Its high contrast b&w photography is artistically composed in natural twilight or the dark. There are distorted close ups and long shots of eerie stillness. Figures appear and move unnaturally. One of the greatest merits is the amazingly gloomy and oppressive organ score. Hilligoss is ethereal as the living ghost who has cheated death. She is the only professional actor in the film.

The only strand of the film which doesn't really work is the uncomfortable attention of a young man towards Mary in the boarding house they share. He is rather too effectively repellant. But it is one of the great horror films. Harvey was an industrial documentary film maker. This was his only cinema release. It feels like a miracle that it came about at all, and much more that it is so great.

More titters than scares - Carnival of Souls review by Kurtz

A relic of the drive-in cinema age, released in 1962 by a director who had up until then majored in health education films, “Carnival of Souls” is interesting nowadays only as an indicator of how far film-making and acting has come since the early sixties, and as a blueprint for the “caught-between -two –worlds” type thrillers like “Jacob’s Ladder”and “The Sixth Sense”.Other aspects have dated horribly, the stilted acting and the leaden dialogue, particularly in the less “intense” scenes, proving particularly hard to forgive. When things start to unravel for our heroine, there is admiiedly a vaguely spooky feel and the “Carnival” of the title is not somewhere you’d like to wander at night, but eye-rolling close-ups of lead actress Candace Hilligoss have you wriggling more in embarrassment than fear.