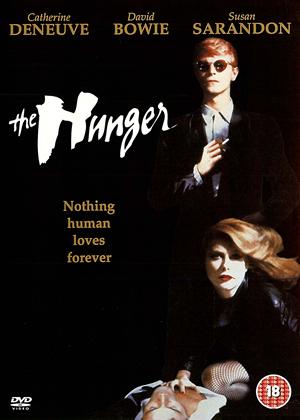 Reviews (2) of The Hunger

Spoilers ... - The Hunger review by NP

At the time of writing, Dave Bowie has recently died. To describe him as a singer/songwriter doesn’t even begin to describe his musical genius – he was a true pioneer, several times over – and he has been widely recognised as such. His acting career, however, has attracted more mixed comment.

He initially impressed in Nick Roeg’s ‘The Man Who Fell to Earth’ film, in which he very convincingly played an alien in human form. He was using cocaine regularly during this time and his memory of the film is somewhat hazy – possibly that leant something to his ‘out there’ performance, which was powerful and desperately fragile at the same time. After a spell on stage playing The Elephant Man (without make-up, using his body and vocal inflections to communicate John Merrick’s physical deformity) other parts followed, including that of John Blaylock, partner of Catherine Deneuve’s Miriam Blaylock and centuries old vampire in this Tony Scott (brother of Ridley) directed film.

Critics have not been kind about ‘The Hunger’. The main comment has been that it is ‘style over substance’. Whilst the direction, lighting and pace is extremely artistically framed and shot, the storyline is thin at best. But is that a criticism? Not as far as I am concerned. Some of my favourite films are very languid in their telling (a number of them are reviewed here) and surely the lack of a fast pace allows us to become familiar with the characters, their lives, their relationships and the world in which they inhabit. When things happen to them, we care more because we know them better than if their characters had been communicated between spectacular effects shots or a desire to get the story over and done with amidst, as Bowie might say, ‘tits and explosions’.

So when John Blaylock begins to look his age, it is apparent something is very wrong. It seems Miriam has tired of him somewhat, and he is alone seeking help in a hospital waiting room. The staff at the hospital seem determined not to come to his aid, and in the space of a day, he appears to age 70 years. The make-up and performance are incredible here. As Blaylock’s hair comes off in clumps in his hands, as we are given glimpses of the heavy lines appearing and deepening around his eyes, we are witnessing a slow, uncomfortable demise.

It is never specifically established that he dies. He is placed in a coffin, now a crumbling shell of a man, by Miriam whilst still showing signs of life – indeed, he appears to haunt her towards the film’s end, although this could be an hallucination.

Deneuve and Susan Sarandon (whose characters become inter-twined) get the lion’s share of screen time – the idea of the eternal vampire living in accepted society has been done a number of times, of successfully so. This is no exception. It’s as convincing portrayal of the supernatural existing in our time as any I have seen.

I was really moved by this potent vampire movie by the late director Tony Scott. A strange melancholy permeats the film as unlike other vampire films this deals predominantly with immortality, eternal youth and the passage of time as well as bunch of blood letting and sex. Catherine Deneuve, David Bowie and Susan Sarandon star and even though its firmly defined by its 1980s stylings, it still weaves its magic. I'd never seen it before and was very impressed.

It's high on style, which dates it. But I didn't mind on this occasion. The ending is a bit muddled too - reading its history it seems the producers fiddled with the final cut.