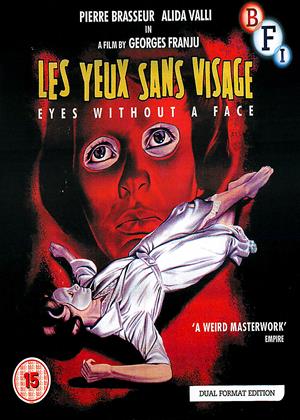 Reviews (2) of Eyes Without a Face

What an incredible experience this is. A story that deals with such revulsion and bleak desperation emerges as a haunting thing of beauty. This is largely due to the performance of Edith Scob as the gracefully tragic Christiane, whose face is destroyed in a car crash caused by her father. She is condemned to flit through the prison her family home has become, equally imprisoned by the mask she wears to hide her ravaged features. The mask itself is simplicity itself, yet almost appears to emote at times – it is quite incredible how lifelike it can be in some scenes, and coldly sinister in others.

The music is a major factor in this film’s feelings of unease. Some scenes – such as Christiane visiting the latest ‘victim’ strapped down in her father’s surgery – are accompanied by nothing except the howls of the many guard-dogs caged outside. Other scenes, including the story’s opening, are scored with a deceptively jolly carnival suite. This deeply inappropriate music could rob the film of any horror atmospherics, instead it enhances the feeling of perverse unease.

Filmed with slow deliberation, fitting for a story involving the intricacies of surgery, the style is reminiscent of other films of the time, notably Hitchcock’s Psycho (another major horror contribution from 1960). It also brings to mind the more recent horror shocker The Human Centipede, which caused a similar reaction in cinemas in 2009.

Two scenes stand out as being remarkably, repulsively powerful. One is the unflinching sequence involving the removal of a human face, and other is the gruesome attack on Christiane’s father, Doctor Genessier (Pierre Brasseur), by the dogs – ironically rendering his face to pulp too.

As for Christiance’s fate – who knows? She frees the dogs, and drifts off into the night like a ghostly apparition, framed by the flitting of the pet doves she has also freed. We can only imagine what becomes of her – throughout, she has longed for death, sickened by her father’s attempts to save her face, so her future is bleak. We will have to make up our minds.

Dull and silly - Eyes Without a Face review by fm

This is a sorry little period piece which may say something about contemporary worries about transplants but there's little else to hold the attention. A turkey that is best forgotten except by the most dedicated B-movie fan.