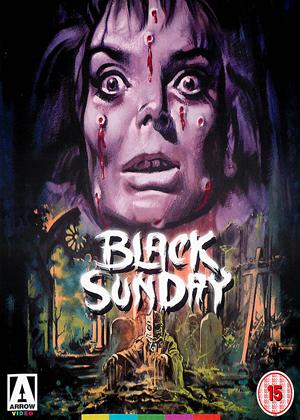 Not a review of film rather the version provided - dubbed version (from Italian to English). In my opinion makes the film unwatchable.

Which Witch Is Which? - Black Sunday review by Count Otto Black

Firstly, a technical note to clear up any confusion the DVD info given here might cause. It appears to refer to a more expensive DVD than the one you'll actually be sent, which doesn't have most of the special features mentioned, many of which are supposedly on a bonus disc which doesn't exist. And, as the previous reviewer furiously noted, although it claims here that you have the option of watching this Italian film in Italian, badly dubbed English is what you get. Judging by the credits, this appears to be the soundtrack recorded in Italy for the first US release that Roger Corman thought was so poor he recorded his own version, which presumably wasn't used on this DVD because it was for a print with so much violence cut that it was several minutes shorter.

Though actually the dubbing isn't really that bad apart from the leading man, and looking at him I got the impression that even with his own voice he probably wasn't the world's greatest actor. In films like this the handsome young hero is always the least interesting character, and Mario Bava was even less interested in him than most horror directors. This film starts a trend Bava would explore more fully a few years later in the very similar "Kill, Baby, Kill" for the male hero to spend most of the movie utterly bewildered while supernaturally dominant women run rings around him and generally steal the film.

Which Barbara Steele certainly does in the dual rôles of the innocent Princess Katia and her far-from-innocent lookalike ancestor Asa, who, in a prologue so nasty it got the film banned in the UK until 1968, was put to death for witchcraft, Satanism, vampirism, and being the lover of her own brother (something the English soundtrack never mentions, but why else do you think her descendants have his portrait as well as hers in their living room, and he has their family crest on his shirt?).

It's Steele's surprisingly limited screen-time as the demonic Asa, who has clung to some kind of life for 200 years inside a body only slightly better preserved than centuries-old cadavers usually are, that gives the film its power. That and imagery which exceeds even the new horror benchmarks recently set by Hammer in its graphic unpleasantness, especially the early scenes showing the very start of Asa's torturously protracted resurrection, which leave us in no doubt at all that she's is a putrid husk.

Unfortunately it waters down the surreal creepiness of the main plot thread, in which Katia and the rest of her glumly fatalistic clan live in opulent misery under the shadow of a curse which seems to be, as the perils in nightmares always are, excruciatingly slow-moving yet totally inescapable, by spending far too much time following the strangely pointless attempts of the wooden hero to figure it all out, and his tedious but inevitable romance with the gloomy Katia, who's supposed to be gorgeous but looks almost as off-puttingly weird as her evil undead doppelganger because Barbara Steele can't help it. If she was in movies today I'd suspect them of using CGI to make her eyes just a little bit too big, causing her face to slide into Uncanny Valley, but they couldn't do that in 1960 so she must really have looked like that. No wonder she ended up being typecast as a horror heroine.

It's not quite the masterpiece some people claim, more a patchwork of bizarre incidents and grotesque imagery that will stay with you for a long time, embedded in a story which could sometimes do with shifting up a couple of gears. But the best scenes are still very disturbing, and back in the day it must have knocked the socks off cinemagoers who had only just gotten used to horror movies actually daring to be a bit horrific, and then this came along in the same year that the even more excessive "Les Yeux Sans Visage" had audiences literally throwing up in the aisles at the Edinburgh Film Festival. Things would never be the same again.