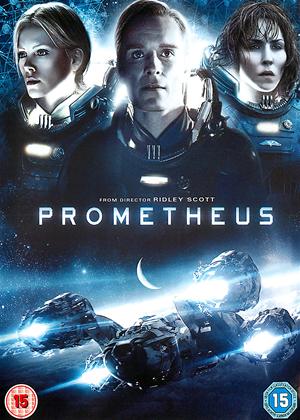 Alien' is a superb sci-fi film, and 'Prometheus' was hyped as a prequel - which it is, sort of. I say 'sort-of' because the storyline is very, very confused and without reading an explanation on IMDB or Wikipedia or whatever it would be difficult to make it out. And that's a great disappointment.

The film looks great, with the same use of dark, densely-realised backgrounds that Ridley Scott films are famous for (cf 'Aliens', 'Blade Runner', 'Black Rain'). The effects are great. The sound is great. The acting is so-so - 'wooden' comes to mind - and to say that the best acting comes from the android character David is to damn the film with faint praise.

Unfortunately instead of 'Prometheus' being a prequel to a sci-fi thriller / horror film it falls into the somewhat over-ambitious and certainly over-pretentious trap of trying to make a film about the origin of man. And in this it fails. If it had simply stuck to the formula it would have been really good, but as it is - and despite the excellent photography and effects - it becomes just another over-complex, messy film. Which is a pity because it could have been great rather than just average. Or perhaps I'm missing something and the inevitable 'Prometheus 2' will reveal it to be a masterpiece...

Noomi Rapace has got a lot to live up to since "The Girl.." trilogy. I think she is an outstanding actress (do you have to say actor?) and is entirely convincing and entertaining, but the film is poor generally relying on mucus covered C.G.s to revolt and shock. The space shock scenes have not changed since Alien and I would suggest that if you can't improve on them, do it differently. The plot is broken and uninteresting with too much straining of incredulity. The slimy monster up the nose trick I have seen so many times (men in black is the best) recently I think it should be banned except for satirical or comic purposes. Ultimately pointless and unoriginal.

As with any Ridley Scott movie the viewer either loves what he makes or hate it. Personally, I thought that compared to the Alien movies the was a comparatively poor spin off. Saying that it wasn't what I would describe as consider to be a terrible sci-fi movie and as far as that goes I thought it to be average and overall I can't say I disliked it for what it turned out to be.

Could have been such a better prequel! - Prometheus review by DJ

I read somewhere that originally this script was written with a much stronger linked ending in the movie Alien but Ridley Scott didn't want to go over old ground again ("it's what the viewers would want!") but personally this should have been linked more to Alien and then Aliens. This movie is at it's weakest in the direction it went in after being rewritten that it's the prequel to us as humans. The origin of our species, not the alien species. Where did we come from? Is there a God? This movie is simply not intelligent enough for the deep philosophizing it does. It's at it's weakest in those parts and also the narrative and some of the acting related to this. There are even plot holes due to editing with crew members coming alive again, due to moving around the movie.

The movie is beautiful though with great special effects. Some of the main characters are fabulously portrayed, Elizabeth Shaw portrayed by Noomi Rapace is a really interesting lead protagonist. Just falls apart with the faith stuff (which they have to make really obvious) and the relationship with her boyfriend fails because he is cute but they just don't sell the relationship well enough. Michael Fassbender, Charlize Theron and Idris Elba are excellent characters. Idris keeps his accent up the whole film! The rest of the actors are so so and you end up not really caring if they live or die which is a problem in this movie.

If you watch the movie several times, it becomes more endearing somehow. The first watch is just confusing as you try to follow the narrative. Without spoiling it, the movie does end with big hints or links to the Alien series. I liked this movie in the end but it could have been a lot better! I did like the character of Elizabeth Shaw and she could have been a new Ripley but was disappointed to read they don't continue with her very long in the next movie of the series. In fact I have read that Alien Covenant a lot worse than this one but that I still have to watch :) Worth a watch, does contain some horror and scenes that make you jump but not as good as Alien / Aliens ultimately.

Massively underrated yet a significant science fiction film, beautifully filmed and with a very intriguing, clever and intricate story. It is obviously a prequel to Alien (1979) but not a direct one and I'm guessing that die hard fans of the Alien franchise expected another chase film through dark corridors by the iconic monster and were disappointed when they got a film that attempts to delve into more involved themes. This is set 30 years before the events of Alien and the discovery on Earth of ancient cave paintings leads scientists Elizabeth Shaw (Noomi Rapace) and Charlie Holloway (Logan Marshall-Green) to believe that an alien race somehow 'engineered' humanity into existence. Funded by the hugely rich and powerful Weyland-Yutani company a space mission sets off to find this race of 'engineers'. They find something much more sinister and frightening. Like many great scifi movies the film thematically attempts to deal with the origins of mankind, it's an attempt at working into the world of the Alien franchise some sense of meaning and complexity. For me it's flawed yet quite a wonderful film with so many clever twists and turns that it warrants repeated viewings. A central issue here is the role of the android David (Michael Fassbender) and his position in the hierarchy that includes the coldly domineering Vickers (Charlize Theron) and the very old, malevolent Weyland (Guy Pearce). Director Ridley Scott always wanted to look at an origin story for the Alien universe and he has really opened up the franchise to the extent that the original film and its two sequels gain a different sense of meaning. I urge anyone who was disappointed before to give this another go. It has some superb visual scenes and it's epic in structure but overall its a film that actually fits rather well into the story you know so well from the earlier films.