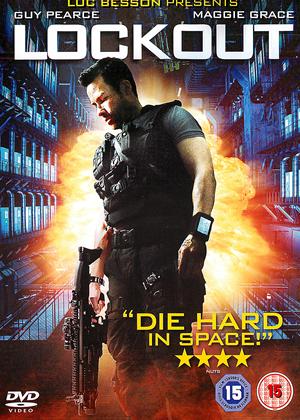 The film’s slightly strange choice of hero, Guy Pearce, finds himself, an ex CIA agent accused of murdering a colleague, sent to an off world prison ship where he is to spend 30 years frozen in a cryogenic state. On the very day that Snow (Pearce) arrives on board the president’s daughter, Emilie (Maggie Grace) visits the compound, only to be kidnapped and held hostage by one of the inmates.

After releasing all the other prisoners, psychotic brotherly duo Hydell and Alex, begin making demands, using Emilie and the prison staff as bargaining chips. Snow, thanks to his CIA training (and unusually bulked up physique for Pearce) is offered a pardon if he can infiltrate the prison, kill the bad guys and rescue the princess – or thereabouts.

From here there’s lots of shooting and fighting and witty quips and one liner's, a reasonable amount of violence and a fairly obvious plot progression all of which culminates in the typically predictable ending.

Whilst some have dared to call Lockout homage to sci-fi predecessors such as John Careener’s Escape from New York, I can’t help but feel that this is giving the film more acclaim than it really deserves. This is not to say it was a bad movie, just that it was, despite it’s French origins, a straight forward, American action film, just set in space, with Guy Pearce instead of Bruce Willis.