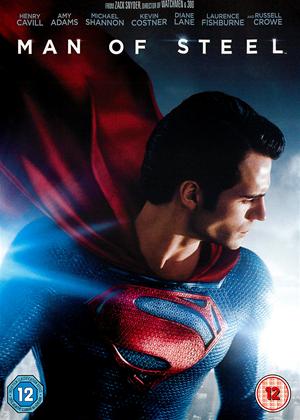 Reviews (6) of Man of Steel

I enjoyed this Superman film , yes its a reboot or remake , what ever you want to call it. Its an upto date modern Superman like they have done with the other super hero films. This is like the first and second Superman of Christopher Reeve all rolled into one film. The effects are very good, I thought it was a good film .

Dull, Boring, Unimaginative and a re-hash of everything that's been done before! - Man of Steel review by CS

What was the point?! This starts off quite well, but then I start to see scenes from Star wars, Star Trek, The Matrix and so many other Sci-Fi movies in here. It's an old storyline which has been told so many times. This is really just a remake of the old films, with nothing new being added to the storyline. Whilst the special effects are good, they re also so fast that you don't actually see anything. I really had to struggle and force myself to watch the rest of this film, because I started to get bored half way through. Overlong and it just kept repeating itself! If like me you like a well produce, well directed film with a strong script, good acting and an actual storyline, then give this a wide berth.

If you want a movie where a lot of good talent and a fantastic opportunity was wasted which could have added to the Superman/Superhero franchise - then watch this movie.

It is a good example of where it can be proved that special effects alone don't make the movie.

Would I watch it again - no.

I watched this with my 2 boys (8 and 12) and we all loved it. The special effects and the battle scenes were amazing. Good casting for all the lead roles.

It's a remake, so by definition it isn't very original. I couldn't help constantly comparing it to the 1978 version directed by Richard Donner and starring Christopher Reeve - and while that film is flawed, frankly, 'Man of Steel' falls short.

One thing that is improved on is the Jor-El role, Superman's Kryptonian birth father. In the 1978 version he was played by Marlon Brando whose part lasted far, far too long before the action started. Here, he's played well by Russell Crowe who is quite effective, and the action (well, the CGI effects anyway) start pretty quickly.

Unfortunately everything then slows down to a snail's pace as we see Superman with his earthly adoptive parents in a series of not-very-interesting flashback and flash-forwards. But half the film has now gone - perhaps the director recognised that he was running out of time to make things interesting so added on another hour or more of CGI effects to add loads of crash-bang-wallop in an attempt to recover the audience's waning interest. It all adds up to 2 hr 17 min - and it feels even longer.

Henry Cavill plays Superman / Clark Kent with a permanently furrowed brow - he just didn't seem as 'human' or as geekish as the hero of the either the original comics or the 1978 film. Nor did Amy Adams convince me as Lois Lane, nor was Michael Shannon 'bad' enough for chief baddy General Zod. And there's no Kryptonite and no Lex Luthor :(

I really wanted to like this, but I didn't. I suppose I really ought to re-watch the 1978 film to make sure, but I don't need to: although that film starts off boring, it doesn't end up boring. This one does.

I'll give it 2/5 stars, although that does seem a bit mean. But I honestly didn't like it.

Looks so good! - Man of Steel review by ps

Looks great, the Score is beautiful, acting is solid..until the last quarter, where, i feel the script writers gave up. The end looks great but, direly written, its like they gave up just for the spectacle.

Other than that, takes my Breath away.

The well known all-American story about a distinctly un-American, and un-human, superhero is back and this time under the supervision of comic book movie aficionado Christopher Nolan. Man of Steel is his reimagining of the classic Superman genesis story; the child sent from his doomed home planet to Earth with spectacular powers of super strength, flight and funky laser eyes, to save the world from evil.

The evil in this particular film comes in the form of General Zod, also a Kryptonian, one of the few left in the universe, banished from their home planet as a criminal, moments before the whole place explodes. Now in search of the genetic codex that holds all the information about any future Kryptonian’s Zod is determined to resurrect his race on planet Earth, at the expense of the humans currently living there that is.

Earth’s only hope is the handsome red-caped hero that is otherwise known as Clark Kent.

A very familiar story to most no doubt, and that is the overall feeling gained from the film as a whole, that there really isn’t anything new on offer here. Where Nolan’s version of the Batman story was strikingly different, darker and more adult when compared to it’s earlier on screen adaptations; Man of Steel still emanates the clean cut WASP sensibilities apparent in Christopher Reeve’s versions of the series in the late 1970’s.

So not only do you feel like you’re watching something you’ve seen before but the slow pace and gaps in the narrative also cause the film to fail to really hold your attention.

In what one can only assume is an attempt to conceal the plot holes Nolan has opted to fill the final act of the film with the complete and utter destruction of the city of Metropolis. Though visually impressive the violence is so constant and intense that after a while it loses all meaning; the pointlessness rising to a dull crescendo in the final, final battle between Superman and Zod where the killing blow appears significantly deflated and unimportant alongside the epic explosions previously witnessed.

I had expected something more from Man of Steel something with a bit more fibre and bit more grit, having never read the comics myself I can’t possibly compare the tone of the two, although the prevalence of the aforementioned clean-cut tone suggests that perhaps Nolan was being true to his source material.

Luckily the film has one or two saviours within its cast; Russell Crowe as Jor-El, Superman’s alien father is a surprisingly enigmatic choice, whilst Cavil as the farm boy Kent himself fits the part perfectly. Stealing the show however is Amy Adams as Lois Lane, her stunning smile and screen presence blowing everyone else out the water.