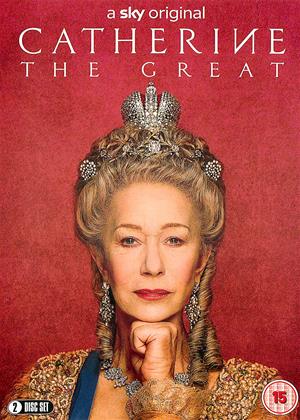 Reviews (7) of Catherine the Great

With the possible exception that she has Russian ancestry, why cast Helen Mirren in this role, she is around 40 years older than the age of the character she portrays?

For a far more entertaining and closer to history version watch the Russian produced Ekaterina, it is brilliant, unlike this dull effort.

This is a TV series made, I presume, to pander to the MeToo demands for more 'strong female lead' characters in drama. Most movies doing that have flopped badly because the movies are so dull. This is not, BUT I longed for a TV drama about the more fascinating Peter the Great (early 18th C and he worked as a ship builder incognito of Deptford in London too) or Ivan the Terrible (16th C).

Helen Mirren does her usual royal imperious act, though it was hard to keep her portrayal of Elizabeth II in The Queen out of my head while watching this.

I am no expert but I believe Catherine was a brutal ruler who executed many people - she is portrayed here as a 'liberal' who wants to ban slavery (Russia had serfdom till 1860s, I think). I suspect Russian language films about Russian history will be better.

Potemkin in real life was a sycophant who grovelled to Catherine and lied to her about the success of Russia. He lends his name to Potemkin Villages - the fake PR exercise using stage set boarded facades of houses which he ordered by put up along a river so when Catherine saw them from her boat she thought these were wonderful new villages and towns constructed during her reign., It is baffling that that is not included here. Instead Potemkin is portrayed as an idealised and perfect man who was adored by Catherine - the relationship was a lot more political then that. BUT then, The Crown is pure fiction and lies re the British royal family, and Hollywood's pc lies are legion.

The Crimea features no doubt as the recent annexation of Crimea by Russia was a news story not so long ago - and it all started here.

All filmed in Lithuania. Nice period buildings, sure, but it ain't the real thing, the Kremlin, Read Square, the WInter Palace and Hermitage. So it's all rather understated and just not bling enough, really.

But, watchable. If meandering. I'd love to see a series on Peter the Great though. Over to you, Amazon/Netflix/whoever.

So far so good, I've only watched the first disc yet and hope disc 2 is as good. My kind of film.. Characters scenery and plot. Although I agree with other reviewers concerning Helen Mirren's questionable age appropriate role.

Not what I expected - Catherine the Great review by Ken

I thought: period drama, Helen Mirren - should be good.

Sadly, as is so often the case these days, it seems to be considered necessary to pepper the dialogue with a proliferation of foul language. A real shame because it looked like it would be otherwise very watchable. So, if you don't like to hear the "F" word at regular intervals, avoid this one.

Let's start with the good parts, and many aspects of this film are so good they are indeed worthy of Oscar nominations. The cinematography is superb, with atmospheric outdoor scenes, and sumptuous indoor settings of such incredible grandeur, lit and photographed perfectly and with stunning costumes to add to the splendour of the Russian court of Catherine the Great. Effects are gory and lifelike but never overdone, and the sound is rich, clear and well mixed. Music is beautiful and mixed well in surround.

The storyline concentrates on the on-off romance between Catherine and Potemkin, maybe a little too much as there isn't much else to the film. The characters flip between silly spats and gooey sentiment with a lot of exotic bonking inbetween. The dialogue is exceptionally naff, and sounds like two 20th century schoolkids battling with their first love affair behind the bikesheds.

The dialogue is certainly the worst part of the film, for example when Catherine berates her useless son Paul, she looks at him and in homage to Dad's Army says with a straight face "You stupid boy". Guffaws emanated from our sofa at this. Then when Potemkin boards the royal barge and runs up the steps shouting "let's get this show on the road" you know the script is seriously quality-challenged.

Catherine is at this time the ruler of all Russia, possibly the most powerful ruler in the world, but Dame Helen is showing all the gravitas of an irate pub landlady at closing time. Lots of effing and other oaths which do sound odd and seem out of place which spoil the film even further. Surprisingly this is not one of her great roles, as she is obviously struggling to show her enormous acting capabilities with such a poor script. Potemkin shows a thin portrayal of a rising then fading military star in fits and starts as each part of the script allows, but never really develops any depth of character.

It all goes to show how so much of a film can be great but if the script and dialogue is badly mis-matched then the whole thing flops. And this film does flop.

We struggled through episodes one and two hoping for some improvements, then episode three filled out the storyline a little more, but I'm afraid we nodded off a few times in episode four and greeted the closing titles with a feeling of relief.

Disappointing - Catherine the Great review by DO

Not up to BBC drama standards. Characters and dialogue did not engage me. The frequent sex scenes seemed superfluous- just thete to keep the watchers- they had the oposite effect on me. Disappointing.

Concentrated on internal politics of the court which was sumptuously portrayed. Would have thought what was going on outside would have been interesting too given the time in history. Probably too much to cover!