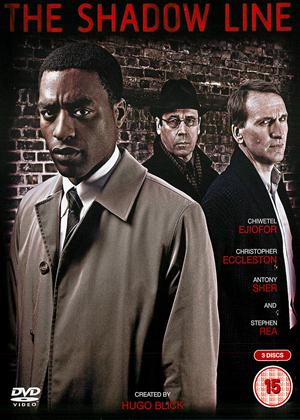 Reviews (1) of The Shadow Line: Series 1

A Detective Inspector returns to work after being shot during an operation that went wrong. His first assignment is a mob killing of a drug baron. What everyone wants to find out, from rival crime syndicates to the police is, "Who did the killing?".

It is well cast with actors who look the part, but able to embellish on that by their acting. Gatekeeper for example. Stephen Rhea reminded me of Nigel Slater with his gentle manner and calm speech. This made his actions all the more shocking in the later episodes. Jay, (Rafe Spall) is a wild mixture of viciousness and charm, totally unpredictable, but somehow likeable. I could go on, they're all good.

If you want a happy ending, this is not priority watching. If you are willing to journey with the author through modern society, reflecting on what is right or wrong, and from whose point of view, then you should be satisfied. You wont get answers, but much to think about.

One topical theme commented on is the pension crisis; the problem of having too many people on pensions and not enough working people to pay for them. Don't let politicians watch this series. They have enough bad ideas of their own without taking inspiration from this to solve the pension problem.

It is possible to critics this, but the faults are minor and perhaps subjective. I found the plot a little too convoluted for me to follow easily, but the overall arc is easy enough to comprehend once you get to the end. This does allow for a second watching after a suitable interval (see footnote). The implication in the story, and hence the title, is that there is a fine line between right and wrong and that many of the characters in this story tried to walk along it, some straying one side, some another

Although this is British and the characters are British, in the opening scene the police had an American look about them due to their caps. I don't know why they had what looked like "Scene of Crime shoe coverings" on their caps. I have never seen this before, maybe it was protection from the rain. I also don't know why I thought this made them look American. As soon as sergeant Foley spoke however we knew we were in London.

The strangeness of the caps added to the success of the opening scene which was cleverly done and drew you in. The key to a good introduction is to pose questions that don't need answers, but arouse curiosity. This author knows how to do it.

There are drugs, there is violence, there are killings, there is loyalty, there is betrayal, but I found it watchable and enjoyable.

Six months later I didn't recognise the title and borrowed it again. I recognised immediately that I had seen it before, which shows how effective the opening sequence was, but could not recall the plot. As more characters appeared I remembered some of the twists but still could not recall the overall plot. Halfway through episode one I had remembered three significant events which were spoilers, but I still wanted to watch it again. I would say that six months is a bare minimum, but at least a year would be better. A second viewing is definitely possible; even if you now know where it is going, the plot and performances can still be enjoyed.