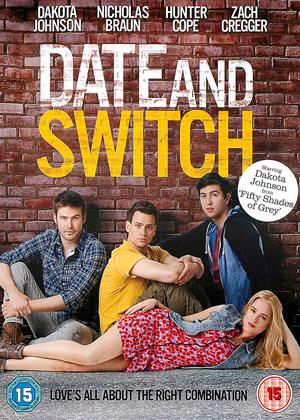 Reviews of Date and Switch

Date and Switch is one of the more unorthodox scripts for a high school comedy. It takes the whole let-us-get-laid-before-college plot and turns it on its head when discovering homosexuality enters the picture. It may seem like a very unique and progressive route to take for the teenage sex comedy and it could’ve been a real trailblazer. Sadly, the end result turns out to be less Judd Apatow and more American Pie with a sitcom vibe.

The two best buds Matty and Michael take the age-old vow of losing virginity before the senior prom. They even set a goal line with a childishly erotic weed cake they plan to eat upon succession. Plans change when Matty reveals to Michael one night that he is in fact gay. Michael is shocked and angered, but tries to respect his friend’s new found identity. He tries introducing him to guys and going on outings with him to eccentric gay bars. Given Michael’s limited knowledge of homosexual culture or how to act around his new gay friend, Matty finds himself put off by the feeble attempts of his old pal to empathize. Matty eventually grows to roll his eyes and accept this as Michael makes nice with a remade cake in the shape of male genitalia.

Eventually the movie evens out to the two of them seeking their own true loves for prom amid judgmental parents and students. The mission remains despite their sexuality. From that angle, the movie appears almost sweet in how two dude-bros can remain as such while still indulging in their own sexual goals. That twist may make the film the first of its kind, but it still doesn’t prevent Date and Switch from being just another run of the mill low-brow, teen sex comedy in its writing. The jokes are all the a-typical raunchy jabs would expect for a movie with drugs, sex and adult language. Nothing of the slightest surprise occurs outside of the initial reveal.

On that level, the film works far better for its drama than its comedy. The maintaining of a long-running friendship with such a new discovery makes for an entertaining script with limitless potential to explore. Sadly, the film only explores about as much as your average sitcom and then proceeds with sitcom-level humor. This makes the film far more disappointing seeing as the material was there to build something that really speaks to a new generation about sex. This is not the type of picture that should be playing such a concept so safely.

Date and Switch was directed by Chris Nelson, his previous film being the unlikable comedy Ass-Backwards. After these two films, I’m convinced that he should be directing network TV comedy as opposed to feature films. Either that or he needs to seek better writers as the script was penned by Alan Yang, best known for his writing on the series Parks and Recreations. These two clearly have a longer road to travel before they’re ready to make feature films with real characters as opposed to a cobbled mess of cliches and gags.

The squandered opportunities from Date and Switch are far more disappointing than infuriating. If the film wanted to go for that familiar John Hughes vibe, it should’ve delivered on better defined characters. If it wanted to make a real statement about gay teenagers, it should’ve tried to inject real emotion as opposed to the woodenly plucky energy driven by the old batch of sex-comedy jokes. The best thing I can say about this film is that we’ve finally reached a point in our society where we can have dopey teen sex comedies that involve homosexuals. This is a film more admirable for its potential than its actual results.