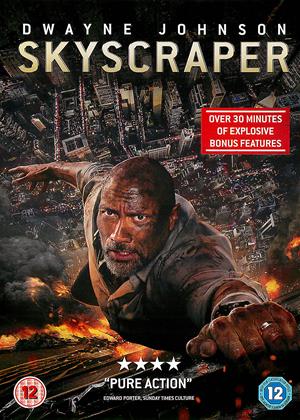 Yes, the plot is far-fetched BUT it Is visually spectacular, nail- biting, edge-of-the-seat stuff. Dwayne Johnson does his modest super hero act very well indeed. We loved it.

In essence a remake of Towering Inferno, with a modern angle to it! Johnson has fast taken over the action hero role from where the likes of Swarzenegger, Stallone and Willis left off and he does it very well too. There is nothing new or original here at all, in fact I'm sure I've seen some of the gadgets and scenes in other films before and the basic storyline has been done so many times before in films going way back to the 40's! But for all its unoriginality, to be fair to the film, it is so well done and so fast paced, that you easily forget this and get quickly drawn in to the dynamic and action of the film. The filmography, special effects and action are really well done, slightly over the top in parts, but hey isn't every action movie, yet almost believable in parts. One of the things I like about Johnson is that he doesn't take himself too seriously, unlike some actors, Brad Pitt & Tom Cruise, to name but a few, and has the ability to smile at himself often in his films! In all a really enjoyable Saturday night family movie, really good fun to watch and highly enjoyable to boot!

Seen it all before. - Skyscraper review by RA

This movie is what I call written by computer. Die Hard meets The Towering Inferno with bits of Mission Impossible, Enter The Dragon, The Matrix, …….you get the picture. No acting, character development, or much of a back story required. Non stop action to cover the lack of a story. The CGI is good. Even Dwayne Johnson seems disinterested. Great if you are 13 years old, but I was bored after 20 minutes.

The Rock takes on baddies in a burning supertall Hong Kong skyscraper and it’s film-making by numbers, complete with Mandarin-speaking co-stars for the lucrative Chinese market. It’s that cynical. The action scenes are so derivative they’re boring. On more than one occasion our muscled hero’s left hanging high above the abyss by his fingertips. Will he manage to pull himself up? Guess. He has to jump huge gaps. Will he manage? Guess. He has a wife and two children running around screaming. Will he save them? Guess.

It’s so predictable it’s laughable instead of thrilling. He even talks to himself to let us know what he’s up to. Danish actor Roland Moller makes an insipid chief baddie and sub-baddie Pablo Schreiber, so effective in Den of Thieves, gets bumped off too early. Expect lots of scenes of cgi flames and crowds at the foot of the skyscraper craning their necks upwards. Will they clap and cheer? Guess. The half-hour of extras on the DVD is more interesting.

Full of action - admittedly, lots of CGI but if you can ignore it - you will be rewarded. Great fun!

In terms of what Skyscraper promises, it’s not exactly a failure. The trailers ensure us that Dwayne Johnson will scale a towering inferno, clinging to windows and making wild jumps from great heights. You’ll get some action, some explosions, great special effects, that familiar Johnson grit of pulsating muscles, and a few one-liners in between. I didn’t mind all that, even for being as derivative of Die Hard as it is. But it’s missing something that became clear in the first act: that wicked Johnson charm. I know he is ridiculously strong enough to make us believe he could hold a bridge with little more than veiny biceps and gritted teeth. I also know he can bring more than just strength to his roles.

I think it sets the wrong tone that his character of Will is portrayed as a more quiet hero for this rather silly summer distraction. It’s not exactly rousing to see the film open with him as an FBI hostage situation soldier who fails to save a kid and loses his leg to a terrorist. Fast forward 10 years later and he has an artificial leg and a new wife (Neve Campbell). They met while he was in surgery after losing the leg. His new job, aside from being a dad of two kids, is safety inspector for the latest and tallest tower in Hong Kong. It seems like a cushy job, given his family can temporarily stay in this tower’s residential block that is soon to open to the public. The whole first act showcases every aspect of the building, from its wind turbines perfect for making timed jumps through to a virtual hall of mirrors that seems specifically built for a disorienting chase. Everything is set up accordingly, from a mysterious MacGuffin to the stock terrorists, one bearded baddie with a foreign accent (Roland Møller) and a femme fatale (Hannah Quinlivan) with a tight outfit and haircut that just screams sexy villain.

And yet it all feels so standard, even for the visually striking scheme of the terrorists to set fire to the middle floor of the tower and smoke their target out to the top. There’s an instance to hit every beat of the Die Hard template that few of the film's punches leave a dent. There are Chinese detectives on the ground trying to decipher what is going in the tower but they’re quietly kicked to the side until a gunfight breaks out. Møller has that sinister edge to his presence but never has a breakout moment as a truly terrible guy, his comically bombastic death arriving right on schedule. Quinlivan is nearly a waste of eye candy, tossed to the side so she can shoot the hired hacker when she’s done with him and get into a fight with Neve Campbell.

Surprisingly, Neve is a highlight, far more than just a cowering mom in a corner with the kids. Every scene where she is assaulted by a single terrorists leads to her busting out defensive moves, stabbing and kicking her way out of situations. Two questions: When did she learn all this after being a surgeon and why isn’t there more of her? Considering she spends equal parts time protecting her children from the uncontrolled blaze AND kicking ass, she should’ve been the lead.

Okay, let’s be fair; yes, Dwayne Johnson is still a damn good action star. So good that I almost wish he passed on this production that doesn’t take advantage of his natural charisma. He seems dwarfed by the special effects, offering few quips or charming exchanges past the most passive of dialogue for action pictures. Yes, the tower special effects are dazzling but I don’t think writer/director Rawson Marshall Thurber realizes that Johnson himself is just as big of a draw. Why not use him as fully for every smirk he can garner as a summer movie icon? Any bodybuilder actor could have flung themselves into a role that doesn’t demand much personality. The Rock has so much more to offer that subduing him for this film feels like he’s constantly stuck in first gear.

I can’t be too mad at Skyscraper for what it set out to be. It has its moments of excitement and absurdity, sometimes admirable for keeping the tongue firmly in cheek. And maybe I’m just jaded from too many action retreads or spoiled on Johnson’s more likable roles but I couldn’t shake an irritability with the commonality of the thrills. My eyes started rolling when the terrorist threatens to kill Will’s kid for not cooperating or when Neve Campbell must reiterate the simple line on resolving a tech issue. This is decent popcorn entertainment at best but you really do have to sift through a lot of un-popped kernels to really dig into its mindless romp.