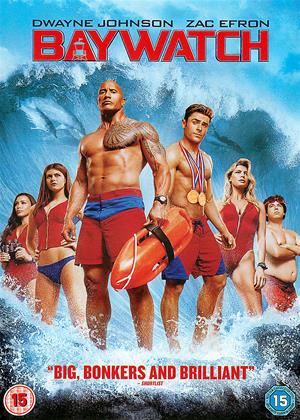 Having watched this I felt genuine sympathy for the cast. Not for the film which is perfect Saturday night plus wine viewing but for all the uptight idiots who rated this as bad. My wife and I laughed all the way through. The Rock and Zac Effron looked like they had an awesome time making it and must have been so pissed at all the haters. Watch it, laugh and enjoy the film.

We were so looking forward to seeing this film and we weren’t disappointed. It’s was brilliantly terrible, but we knew it would be before we watched it, Zac Efron and The Rock were so great together and it looks like they had lots of fun filming. It was a ridiculous storyline but the original Baywatch was pretty ridiculous too. I think it is the sort of film that you just sit back and enjoy, and not expect too much from. It was a fun evening of viewing for us as a family, we laughed a lot!

If liked Baywatch, may find the language and very basic body humour somewhat tasteless. However, if really liked American Pie and Police Academy , and liked them mixed with people who don't like like they can really swim, then this will be a top film to see.

I must admit that when the original cinema trailer dropped, i thought that Baywatch would be as funny and knowingly ironic as 21 Jump Street was. Unfortunately this certainly hasn't come to pass.

If a film is going to position itself as a comedy it has to at least be consistently funny, which Baywatch isn't. When comedies aren't at the very least funny then that's a major problem. Baywatch wants to be (like most comedies these days) both a comedy with action set pieces and neither work. Look, there's some good casting here and The Rock is always a good watch but its script is way, way to shallow for you to care about the rest of the cast. Also, and i'm going to say it, no comedy needs a $70M budget price tag!

Does anyone really care if the Baywatch movie meets the expectations of the TV series it was based on? The show was a garbage excuse of syndication exploitation, making the most of the standards at the time to force through slow-motion bouncing boobs amid melodramatic lifeguard rescues. So unfocused was this series that it eventually went downhill into spinoffs that moved lifeguard antics everywhere from Hawaiian beaches to night-time detective cases that dealt with supernatural mysteries (look up Baywatch Nights sometime if you want a laugh). If I cared enough about the TV series to venture down its 11 season run, I might have been able to make an apt comparison on the faithfulness of the movie. But this movie doesn’t seem to be faithful to any tone or genre that doing a TV-to-movie comparison would be an even bigger waste of time.

To make this mess of a script work, the emergency comedic talent of Dwayne Johnson is called in to save this script. Johnson plays Mitch, known better from the Baywatch series as that role David Hasselhoff played. He doesn’t have the hair, but he has enough spirit to hit a certain level of camp value that Hasselhoff thrived on for his career. But Johnson works well in this role mostly because he’s playing himself as the likable giant that patrols the beach. Everyone seems to like him and he has no major character flaws for being a gung-ho hero ready to save the day. Well, everyone except the cops that despise him for abandoning his post to foil a drug-running scheme. But isn’t that a sufficient reason to be angry? Why are lifeguards shirking their duties to play cops? Doesn’t that seem both implausible and immoral?

Zac Efron asks this question, but nobody gives him a solid answer. Why would they? Efron plays a cocky washed-up Olympic swimmer turned lifeguard trainee that’s in need of an attitude adjustment. Don’t worry, he’ll still get the girl while still being stupid. Okay, I can accept that nobody will dignify him with a response to the actions of Mitch, but what of the police? And Mitch’s boss? And then the cops again? One throwaway joke about the stupidity of the Baywatch TV series turns into a running joke that runs itself into the ground. Let this set the tone for the rest of the movie, repeating every single simple gag until they become devoid of both humor and reason. Both Johnson and Efron spend so much time talking about penises and balls I’m surprised they didn’t break the homophobic tension with a kiss. Don’t worry, all you homophobes; this movie is sexist as hell to remove any doubt that all this joking about genitals will lead to gay sex, despite the film featuring no bare boobs and plenty of exposed penis.

Efron is surprisingly the only character with an arc. Johnson is too perfect for anything more than cracking jokes and flexing his muscles, but seems to tire of this work as his character is written out for a large chunk of the plot. There’s a fat nerd trainee that hopes he can win the heart of the buxom blonde on the lifeguard team, but he already has her in the bag from the start and any heroics he may display in the rest of the movie are just topping off his macho nature. There’s another female on the team, but her sole function seems to be giving Johnson something to kiss. The evil villain of a femme fatale seeking to buy up the beach and control a drug ring is such a bore as a typical Bond villain, insisting at one point that she isn’t one. Sorry, sweetie, you are. And you’re the blandest kind.

Baywatch is plagued with problems, but it goes far beyond being grotesque, unfunny and bland. This is a movie that cannot decide what it wants to be and never finds its groove. It shifts wildly between being a serious lifeguard rescue drama, a goofy beach comedy, a buddy cop adventure and a knowing parody, failing horribly at every angle. The whole movie comes off as a nasty aftertaste of the series, reminding me that the show was more fun to mock on its own than having an aimless comedy do it for me. There were already so many Baywatch parodies from the 1990s, including Son of the Beach, a whole show devoted to parodying Baywatch. It was a cultural icon that should have remained buried in the 1990s that digging up its corpse to have Johnson and Efron making dick jokes seems very inappropriate. Let this franchise die a slow-motion death.