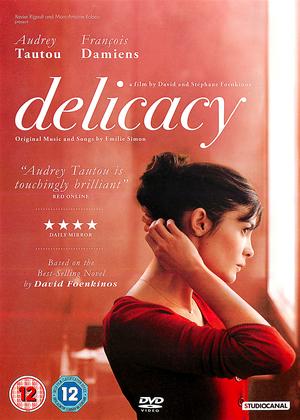 THe film is a delicacy - Delicacy review by CSF

Dealing with a terrible loss and not believing in life and in the future anymore, Nathalie decides to just carry on without trying anything to relieve her from the pain. Then when she starts to take a turn in the most unexpecting way, it is difficult to find it credible but human being are a well of mysteries! The skill of the director is to find a way to convince the viewer that yes, it can happen. It is a lesson of optimism. It is difficult to find Markus charming compared to Nathalie late husband. And yet, it works but not without difficulties and that is the magic of the film.

Audrey Tatou stars in the movie adaptation of David Foenkinos’ novel of the same name as Nathalie, a grieving widow who finds her way back to love through an unlikely office romance.

The movie begins with Nathalie and her childhood love Francois (Pio Marmaï); a couple seemingly perfect for each other and very much in love. We see the sweet and playful proposal and the beautiful wedding in the snow; things take a sudden turn however when Francois is killed in a road accident leaving Nathalie utterly destroyed.

From here Nathalie attempts to close herself down emotionally, throwing herself into her work as a mid-level manager in a nondescript French office, and disposing of all evidence of Francois from the home they shared. Her sharp and efficient work ethic stands in as a guard against colleagues who try to get close to her, including her boss Charles (Bruno Todeschini) who repeatedly tries to court her.

One day however Nathalie inexplicably approaches her awkward and balding co-worker, Markus (François Damiens) and with very little preamble kisses him. From here a strange but rather lovely relationship blossoms in which Nathalie begins to rediscover herself and explore love again.

After the unexpected first kiss the charm and comedy of Delicacy is effervescent; thanks largely to the wonderful performances of Tatou and her male counterpart Damiens. The dark and depressing lead up to this part of the movie however doesn’t really carry the weight it hopes to; Francois’ death comes as a shock to both audience and character but the initial grief is dealt with swiftly and clumsily taking us almost immediately to the funeral and the commencement of the grieving process. From here Nathalie shuts down entirely and, rather than giving us a touching insight into her mourning the movie offers us a drab and un-engaging half an hour of silence, dark clothes and cold looks. It is this and this alone that prevents Delicacy from being as charming as Tatou’s debut Amilie.

On the reverse of this, the most captivating and brilliant thing about the movie is the unexpected loveliness of Markus and his beautifully contrasting yet complimentary personality on the dates with Nathalie. The comedy in the film is well timed and not over played, whilst the romance is far more satisfying and genuine than any recent offerings from Hollywood; unfortunately the dull section early on in the piece sticks out like a sore thumb and is hard to shake off even when singing the movie’s praises.