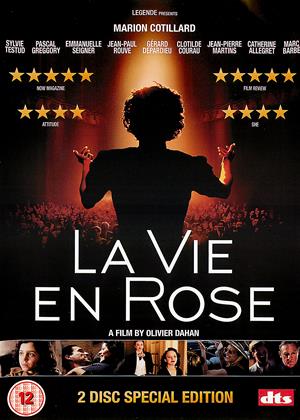 I had put off getting this film out because I wasn't really into Edith Piaf as her style of singing isn't really my cup of tea. However, the film was gripping from the start, beautifully shot and the tragedy of her life story is more dramatic than any made up story could be.

Marion Cotillard's performance is nothing less than stunning and she was rightly an Oscar winner - it makes Kate's performance of an old lady in The Reader look very thin.

An original, and another example of European film making showing a class that American Block Busters just can't buy.

One of them films - La Vie En Rose review by PT

Having recently seen the film Rust and Bone and consequently being blown away by Marion Colltiard's talent I finally decided to watch this film. There are certain films that we are just not drawn to for whatever reason, this being one of them films for me.

OMG, how wrong was I, this performance by Cotillard will be in my head forever, she is extraordinary, one of the best female leads I have ever witnessed.

The real life story of Edith Piaf is fascinating, abandoned by her mother, raised in her early years in a brothel, then in the circus, then the street. The film charts her journey from child, to international diva, to her early death due to her burning out on the cocktail of drink and drugs she was addicted to.

Cotillard is totally hypnotic is this role, I could not take my eyes off her. Whether it be her cheeky grin as a young street singer, her outrageous diva behaviour, her portrayal of the older unwell Edith, in short the whole marvellous performance is a must see. The scene where she goes to dinner with the boxer Marcel Cedan is something else. The way she looks and smiles at him, we witness her falling in love there and then.

So after years of avoiding through my stupid brain, I now know why Marion Cotillard, as of now 2017, is the only actor to win an Oscar for a French speaking role. Extraordinary.

Piaf had a very difficult childhood and this film suggests she had a very spoilt hedonistic adulthood. Brilliantly acted but bit too much about the detail of her biography. It makes her unlikable and the film less interesting.

Cotillard deservedly won awards for her performance as Piaf - an extraordinary performer but a pretty hopeless drunk and drug addict who died at the age of 48 completely burnt out. Tragedy follows Piaf everywhere - a feckless father, absent mother, blindness while being brought up in a whore house, life in the gutter in Paris, the murder of her first manager and the death of the love of her life (unfortunately married to someone else)in a plane crash. The film jumps around a bit but Cotillard carries it and you get a real sense of the magnetism of Piaf on stage, in contrast with her complete unsympathetic real life persona.