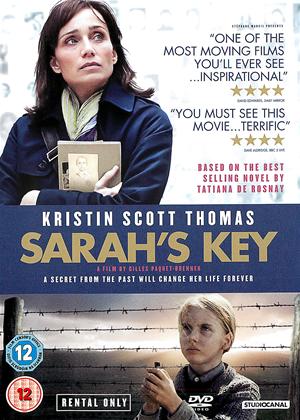 Better than many - Sarah's Key review by JD

How many films are based on the persecution of the Jews in the 2nd world war? Not many are based in Paris and feature the persecution by the French. Despite this novel angle and some above average child acting, the plot is a little unbelievable in parts and the acting by some of the key players (pardon the pun) is uninspiring. Even the rather emotional plot failed to capture my mood completely. There are some very tired scenes with a child hiding while a guard looks for them, time for a different method of suspense.

Any film depicting the Holocaust is going to be harrowing to watch and this is no exception but it was beautifully understated and moving in places. Tying it in with a journalist's quest to discover the truth was a clever device but some of the 'coincidences' were stretching credibility a bit too far. You really have to focus hard to connect up all the various characters, some of whom appear in meaningful ways only to be left unresolved leaving one to wonder what they had to do with anything?

As you’d expect from a film based on the holocaust, this is harrowing viewing in places; especially during the rounding up of the Jews into camps. What makes this stand out though, is that in parallel with the harrowing historical story is a journalist trying piece together the sad story and events for an article. This clever and almost (two films in one) way of bringing across the story of Sarah work really well and is boosted even further by some sensational acting throughout. Tough to watch in places and a reminder of the awful atrocities that humans continue to inflict on their own race.

Loved this film, as did my friends - maybe not the most original subject, but well acted and moving, we liked the mix of French and English language

Sarah’s Key is the English name of a largely French language film named Elle s’appelait Sarah by director of 2001’s Pretty Things Gilles Paquet-Brenner and based on a best selling French novel.

Sarah’s Key is a story based on factual events that took place during World War in occupied France; where Jewish people were herded on mass into a sports centre where they waited to be transported to the death camps. Another foreign language film, The Round Up, from 2010 tells a story of the same event, however the two films could not differ more in their take on this horrendous historical act.

In Sarah’s KeyKristin Scott-Thomas plays Julia, a journalist researching an article about the incident when she discovers a troubling connection between herself and a victim of the horrors. Meanwhile, the story of Sarah, one of the Jews forced into the winter velodrome sports centre, who before being arrested locks her younger brother in a closet in the hopes that it, will keep him safe. Sarah then keeps the key to this closet on her person at all times throughout her ordeal.

The movie is absolutely heart wrenching and disturbing, largely because the depiction of the conditions at the winter velodrome are painfully realistic and probably accurate. Thomas is excellent, as ever, and it is her screen presence alone that redeems the final quarter of the film when Julia travels across Europe in order to find the infamous Sarah.

For those with a soft heart, this film may well bring tears to your eyes.