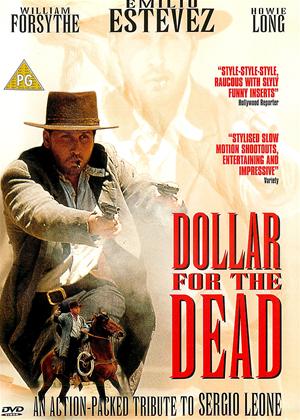 Synopsis:
Cowboy (Emilio Estevez) a lone gunslinger, of grey-eyed coldness and very few words rides into town, trailing a single wooden coffin behind him. Hotly pursued by The Regulators, a band of self appointed lawmen, whom are hell bent on revenge, and led by the imposing figure of Reager (Howie Long).This mysterious figure is a man with no name and a man with no home, whose only role in life appears to be to utilise his incredible gunslinging skills to defend those who are unable to do so against the oppressive bandits and ruthless cowboys in this lawless society.
It is on one such occasion when he rescues a crippled civil war veteran, he is entrusted with the secret of untold treasures, and now has not only Reager and his vengeance riddled posse to deal with but also another band of ruthless outlaws who have made the search for the gold their life's work. It's incredibly stylised action all the way as this cold blooded killer must utilise all of his skills in a battle against overwhelming odds, as the mystery behind the single wooden coffin slowly unfolds.
Actors:
Emilio Estevez, William Forsythe, Jordi Mollà, Joaquim De Almeida, Jonathan Banks, Simón Andreu, Ed Lauter, Howie Long, Lance Kinsey, Steve Peterson, Antonio Castro, Beatriz Guevara, Keith Farmer, Daniel Martín, George Bullock, Ima De Ranedo, Brendan Price, Nacho Leonardi, Joan Minguell, Leticia Álvarez
Directors:
Gene Quintano
Writers:
Gene Quintano
Studio:
Diva
Genres:
Action & Adventure

Reviews (1) of Dollar for the Dead

This is what happens when you try to make a spaghetti western 30 years too late and your name isn't Quentin Tarentino. Every single thing in the film, starting with the name of the production company, is a nod to an earlier, better spaghetti western, apart from the bits pinched from other films that weren't westerns but did involve lots of gunplay. Bored with all those Sergio Leone references? Never mind, suddenly it's gone all John Woo, and the hero is shooting people with two pistols at once while flying through the air sideways in slow motion! There are even borrowings from Luc Besson and the Coen brothers somewhere in the muddle. I was going to say "train-wreck", but strangely no trains are wrecked in this wannabe epic, or indeed featured at all, presumably because the budget didn't run to anything more expensive than blowing up a few patches of dirt and half a stagecoach.

The result is, of course, an incoherent mess. I don't know what director Gene Quintano looks like, but I picture him as a middle-aged man who still wears a backwards baseball cap and says "awesome" a lot. The use of plot-elements from other movies purely for the sake of name-dropping is so overdone that, although the hero spends almost the entire film toting around an unexplained coffin, nobody comments on this, or even seems to notice, because everyone this movie is aimed at can guess what's in the box, so I assume the director just plain forgot that the characters couldn't. Confusing action scenes in a mixture of styles, some of them too dark to see properly, don't exactly help. And although Emilio Estevez does his best to talk like Clint Eastwood, he has the charisma of a dead fish, and pretty much the same facial expression.

I awarded it two stars because it does at least deliver plenty of the promised action, much of which is so silly that you can't help smiling. And for real movie buffs, spotting the more obscure references partially distracts you from a terminally chaotic plot and a hero so wooden that he almost makes it seem as if the rest of the cast can act. By the way, at no point in the film are any dead people given any dollars.