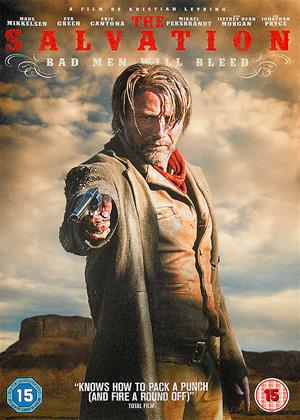 Reviews (3) of The Salvation

On the plus side, what we have here is a Scandanavian movie which, like many films made outside Hollywood, does whatever the director thought was a good idea, as opposed to being homogenized out of existence by a committee trying to jump on the latest bandwagon before the kids get bored with it. What the director is trying to do is to make a good old-fashioned western like they don't make any more. Hero suffers Very Bad Thing at the hands of Very Bad People, Hero takes entirely justified revenge, The End. And full marks to Kristian Levring for avoiding the temptation to turn his movie into yet another Tarentinoesque spaghetti western pastiche where the protagonist basically has superpowers and takes down an army with his immense gimmicky guns in slow motion; though possibly he was just being sensible, since he obviously didn't have anything like the kind of budget Tarentino gets, so blowing up towns and slaughtering hundreds of baddies with giant weapons was never really an option. On a related note, since America in the 19th. century received vast numbers of immigrants from all over the place, there's no reason at all why the hero of a western shouldn't be Danish - other independent European directors take note!

On the other hand, it's just a little bit too faithful an homage to the classic westerns, to the point where it becomes somewhat stylized and formulaic. It was a good move to make the hero an ordinary man who, apart from his military background, has no special qualities other than courage fueled by rage at the dreadful things done to those nearest to him. Unfortunately, with a few token and poorly developed exceptions, characterization is almost non-existent, and just about everybody is a complete scumbag. Likewise, the settings, in particular the villain's lair, a town almost all of which has been partially burnt down for reasons nobody ever bothers to tell us, seem too minimalist to be real places rather than environments which exist to facilitate shootouts, and the use of rather odd filters that exaggerate certain colors makes the whole thing seem a bit unreal, thus somewhat defeating the point of making the action believably realistic, since that very realism often makes the extensive and sometimes ugly violence less dramatic and/or exciting than it would have been in a more over-the-top movie.

Overall, this is a solid attempt at a traditional western with a few modern stylistic touches, and the nods to other classic westerns are seldom too obtrusive, apart from loads of indications that Kristian Levring likes "A Fistful Of Dollars" a hell of a lot, and "High Noon" not so much (which puts him in partial agreement with John Wayne, who hated both of them with a passion). But I think it's been a little bit overrated by some critics just because we've seen so few decent westerns in the last 40 years that it seems more original than it really is. By the way, in case you're wondering, the actor called Eric Cantona playing the evil henchman clearly based on Mario Brega's character in "A Fistful Of Dollars" really is the same guy who used to be far better known as a footballer.

Ok I've been a Mads fan for about 6 years starting with his Danish movies and then following to his more US friendly tableau... but this film has left me infuriatingly dissapointed.

Whilst the s rip is partly to blame, I always believe a sign of a good actor/actress is the movies they choose to do... They proof read the script before signing, so in this case Mads picked a poor movie.

Mads is at his best when he plays strong quirky character driven drama/comedy...

Oh Ah - Seen It All Before! - The Salvation review by DS

The set-up is interesting and different enough to grab the average viewers attention. A Danish immigrant to the US awaits the rival of his wife from Denmark, having been in the harsh West for 7 years on his own. So far so good. Then have your hero being played by the enigmatic magnetic presence of Mads Mikkelsen and double that up with his brother, Mikael Persbrandt, both survivors the Second Schleswig War and you have an interesting and new twist on your traditional Oat Opera.

What we get for our money is the senseless slaughter of innocents so that the protagonist has a just motivation for his slaughter. Very, very, film western. We are then treated to very bad man in charge who seemingly enjoys murdering people willy-nilly for mainly money reasons and we are away. From this point on if you have watched more than two Westerns you know what is coming and how the film ends and so it does. This is the film’s biggest failing.

You have beautiful cinematography using South African vistas to reproduce the desolate and harsh west to impressive effect with atmospheric and haunting skies and lighting tying into the action on screen. Add to this, the aforementioned accomplished Danish actors and the ever consistent Johnathan Pryce, Jeffery Dean Morgan, the underrated and underused Eric Cantona and the wonderfully expressive, luckily for her, Eva Green, heroically eye-brow acting, which she is nails easily, but I feel she done dirty in this role. Give someone as sublime and such a screen personality as her something to say for goodness sake.

The very atmospheric music is produced by Kasper Winding channelling The Last of Us’ Gustavo Santaolalla to such a point I kept expect Joel to pop up and get murdered senselessly but as similar as it seems it works perfectly. Jeffery Dean Morgan proves that his screen persona is pantomime baddy has his character that audience must hate is so bad, so ‘evil’ it borders on comedy parody and as much as I enjoyed the film every time he spoke or did anything on screen it had a tendency to make me laugh or at best hiss and boo. Much more convincing was Eric Cantona as his number two, who with a few lines at best was left to portray character with looks and posture. Less is more and in some ways at the least the Corsican had more shades in there rather than just wearing a big black hat.

The plot is nothing you have not seen before time and time again, starting in Japan and culminating with Sergio Leone we really need a new angle something fresh. When Leone brought the world the ‘Spaghetti Western’ he was trying to move on from the clean-shaven hero/baddy format with unshaven, unkempt, gunmen, blood, death and double crossing. It was not new but it was in your face and sufficiently different enough to stimulate the imagination of the cinema going public. In particular the motivation for the senseless murder and destruction is disappointingly trite and vanilla and also if just thought about for a few seconds collapses under the preposterousness.

Unfortunately The Salvation, whilst worth a viewing just due to the actors on display, is another slightly more modern version of the Spaghetti format. The story is, dare I say, melodramatic and somewhat simplistic, almost childish, none more so than Jeffery Dean Morgan’s set to 11 villain, and this detracts tremendously from the attempt at a western. It is not different enough to get excited about.