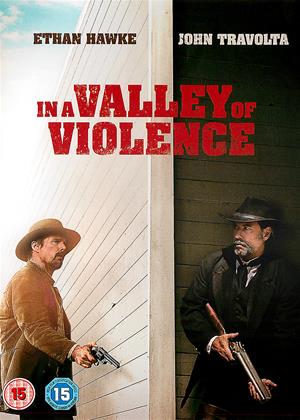 Rent other films like In a Valley of Violence

Reviews (5) of In a Valley of Violence

The awkward cousin... - In a Valley of Violence review by Schrödinger's Cake

You know how when you meet someone for the first time, and within a few minutes they start to be annoying because they’re trying a bit too hard? That’s this film.

It wants to be a grindhouse, spaghetti-western, full of cool, quotable lines, but it ends up just being an awkward cousin. So, as much as you want to give it a chance and to try to like it, you spend most of the film with one eye on the clock waiting for the credits to roll, so you can escape the wall of awkwardness.

Lukewarm spaghetti, reheated once too often - In a Valley of Violence review by Count Otto Black

Right from the opening credits, which precisely mimic the crude animations seen at the start of all three films in Clint Eastwood's "Dollars" trilogy, and are accompanied by music which desperately tries (without success) to sound like the work of Ennio Morricone, it's clear that this movie is doing its best to recreate the gleeful mayhem of the classic spaghetti westerns. Alas, it fails dismally.

Director Ti West has absolutely no idea how to capture the over-the-top cartoon carnage of the films he's so obviously inspired by. At almost no point does anything violent happen without a lengthy preamble revealing exactly what's about to occur long before it does, allowing one or more characters to beg for their lives at considerable length, appeal for everybody else to be reasonable, or simply ramble on about something utterly irrelevant. When, very early on, the baddest of the bad guys insists on having a fight with the hero for no particular reason, it takes such an absurdly long time for what turns out to be the most underwhelming fist-fight you'll ever see to actually start that even the character trying to start it becomes aware that something really should have happened by now. I almost expected the townspeople to go all Monty Python and shout in chorus: "Get on with it!"

Numerous western tropes are dropped into the mix and horribly misused. John Travolta, who has shown in other recent films what a splendidly menacing character actor he can be, phones it in as that tired old cliché, the patriarch who rules the town a little too sternly and has a son who's absolutely rotten. When he stares into the muzzle of a gun and pleads for his son's life, he sounds like a sitcom dad trying to persuade a sulky adolescent brat to tidy his bedroom. But by that time, the viewer will be no more engaged in the painfully listless "action" than he is.

Ti West has noticed that spaghetti westerns often featured comedy, therefore the cast includes an extremely well-trained dog which performs various zany bits of business, appears to understand English perfectly, and is probably the smartest character in the movie. And then, because spaghetti westerns were sometimes very violent indeed, we're treated to an explicit close-up of blood spurting from severed neck arteries. What West fails to grasp is that although these two things could both plausibly appear in spaghetti westerns, they should never both be in the same one. This woefully misguided attitude, along with West's total ineptitude at directing action, and a hero so angst-ridden and reluctant to do anything that he might as well be called Hamlet, dooms this to be the sort of film in which the hero drones on endlessly about how killing people is wrong, and then shoots someone in the head. And worst of all, it's rather dull.

Despite a poor opening, this is a top-drawer loner-seeks-vengeance western. Like John Wick in the Wild West, our loner hero (Ethan Hawke) is lumbered with flashbacks and a dog that understands everything he says to it – a stagey device to allow the viewer to know what he’s thinking. Happily matters improve when baddies rightly take umbrage with the mutt and give Ethan cause to advance the plot and begin his revenge spree. Not before he explains all this over the dog’s grave, of course.

Although there’s too much time spent anthropomorphising the animal as if it were Rin Tin Tin, the excellence of the film’s second half surprisingly turns it into an irresistible western, rising to an exciting climax laced with deadpan humour. Even John Travolta as the town marshall Ethan is up against puts in a solid shift for once, and there’s an appealing dynamic with the teenage hotel keeper (Taissa Farmiga) who takes a shine to the loner in town. A spaghetti western vibe adds to the fun, especially in the opening titles and in Jeff Grace’s iconic score, paying homage to Morricone.

Once it gets going, this is writer/director Ti West’s best film yet and, if not reaching the status of classics such as Unforgiven and Open Range, proves that a good western can still hit the spot.

A traditional western - In a Valley of Violence review by CPJR

It’s appears that Ti West must have watched a lot of westerns mainly from the 1950s then from the spaghetti westerns that the other reviews have suggested when he came up with the idea of this western. There is very little gunplay, none in the 1st half movie as Ti West tries to built up the tension.

Inspiration for the dog appears to come from John Wayne’s “Hondo” and “Big Jake” and the opening scene remind me of the John Wayne’s opening encounter in the “Shootist”.

This is a revenge western in that Ethan Hawke plays a loner with a past similar to the characters that Gary Cooper played in “Man of the West” and “The Hanging Tree” and his partner is a dog. They are on their way to Mexico and decide to stop in a two-bit town instead of going round it. After an altercation with the marshal’s son they carry on their journey but are attacked by the marshal’s son and his cronies. Hawke is left for dead and the dog is murdered. He returns back to the town to exact revenge for the dog!

John Travolta plays the marshal of the Denton who has got it bottled up and tries to do the right thing but his son is no good and he knows it. He tries to stop his son getting killed by Hawke.

The ending is pure ‘High Noon’.

If you have watched a number of westerns from the 1950s there is nothing you have not seen before. In some ways this movie reminds me of watching a Tarantino movie and seeing where Ti West got his ideas from.

Overall this is not a bad movie if you like westerns and it should keep you entertained.

Western Cliche - In a Valley of Violence review by NO

Predictable plot with usual cliches but quite enjoyable. Fr om the scenery point ,they obviously did not spend much money.It could almost

have been done on the stage.I do not know Ethan Hawke but he fitted the character & Travolta is always worth watching.

In a Valley of Violence review by Adrijan Arsovski - Cinema Paradiso

In a Valley of Violence is a straightforward tale of intrigue, treachery, betrayal, hero perseverance, and some other qualifications typical for most spaghetti-westerns of history and today. This isn’t to say that In a Valley of Violence is bad; it’s rather an enjoyable flick that offers plenty of action, thrills, and character drama that will keep you captivated in a satisfactory manner up until the credits finally roll. And when they do, you will not be disappointed, nor otherworldly elated – but rather happy that you didn’t pay a ticket for a film that possibly could’ve been worse.

This flick is directed by Ti West (also known for horror indies Cabin Fever 2: Spring Fever, The Inkeepers, and The House of the Devil), which tries his best to pull off a successful western carried on the shoulders of giants (3:10 to Yuma, Unforgiven, Tombstone). In a Valley of Violence also stars rejuvenated movie stars Ethan Hawke as the former heartthrob whose time is up named Paul and John Travolta portraying the perpetually charming but deadly Marshal in a role that would possibly single-handedly re-kindle his Hollywood endeavors at last (or so we would hope to be the case). In fact, despite being clichéd to death, these characters are very fun and interesting to follow.

Right from the get-go, it’s abundantly clear that Ti West helms the movie in a fashion resembling the old spaghetti westerns. There is nothing new here both in execution and narrative ideas and that’s perfectly fine since In a Valley of Violence doesn’t pretend to be something it’s not. The only (and main) difference that sets apart this newer western piece from its predecessors is the heroic journey. In particular, at first the hero avoids confrontations and conflict and just wants to be left alone. Also, the hero is nowhere near that title: he doesn’t deserve it because he’s a coward and an army deserter who left his family without the slightest sign of regret. An anti-hero basically. The villain you ask?

Well, the villain is portrayed as an idiosyncratic merge of two-thirds righteous man and one-third… actually I won’t greenlight myself into spoiling the whole experience, so I’ll stop right here.

In a Valley of Violence is an overall fun western movie that offers a lot of action thrills, with some quality drama sprinkled all throughout the film that make it that more enjoyable as well. The plot is very basic, but so is life: you’re born, you grow old, and you eventually kiss your life goodbye. To this extent, it can be said without a doubt that In a Valley of Violence imitates life to its smallest, bizarre details, period.