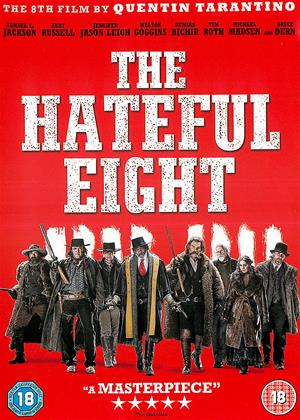 Reviews (9) of The Hateful Eight

Right at the start of the film, you are told this is Quentin Tarantino's 8th film. Which it is, if you strip out the partial films, the producer films etc. lets have a look:

Jackie Brown - where he tries something different, less swearing and violence, more plot, a good film but disappointed some fans

Django Unchained - Quentin does slavery, more violence than ever before, unpleasant characters, some crisp dialogue

Can you see a pattern? Maybe it's me, but Tarantino has been doing his blood and gore with clever words schtick for 8 flims now, and I'm a bit bored. The violence ramps up, but the humour is decreasing. And there is a commonality of ending too, which means you've a fairly good idea of how the film will end before you start. The hateful eight continues the theme (this time, it's a western). Kurt Russell is worth watching, he's a vastly underrated actor and the best bit of the film. But I've reached the stage where I don't get excited about a Tarantino movie. I'd really like to see Tarantino go back to what he tried with Jackie Brown and do something slightly different. But this just a film where he rethreads his past glories into a new setting. Maybe if you are 18, and have never seen any of the first 7 films you'd be blown away (pardon the pun). But I can't see anything new here.

Make that nine. - The Hateful Eight review by Steve

Stagey and tedious - The Hateful Eight review by Alphaville

Remember the long conversational scene at the start Inglorious Basterds? Tarantino has turned it into a 160min film. It feels longer. It begins slow, it continues slow, there’s a half-hour gory section, it fizzles out.

The endless chat about the Civil War and racism does little to advance character or plot. It’s self-indulgent, ponderous and tedious. Because it’s Tarantino, you may sit through it waiting for something to happen. You’ll wait a long time. This is a film made by someone in love with the sound of his own dialogue and little else. If he was a student scriptwriter he’d fail the course.

The opening snowscapes augur well but we’re soon inside a stagecoach, then a staging post, for the rest of the film. It’s like an Agatha Christie locked-room whodunit with stereotypical characters, none of whom we care about. Why film in Super Panavision 70 when it’s no more than a filmed play that nearly all takes place in confined spaces?

Takes time to Develop, but just like a Fine Wine, the Wait is Worth the While! - The Hateful Eight review by CS

This is an incredibly slow film which takes an extremely long time to develop the plot, almost one and a half hours before you start o see any real action. However the last half an hour really explodes with classic Tarantino action, a little bloodthirsty, but well worth the wait! Because this takes such a long time to develop, I can see a lot of people switching off in the first half an hour and I even had to watch this in three instalments because it was so slow! This is more of a play than a movie and I can see it being re-enacted on the stage, as it really does look like a stage play which has been made into a movie! One of the other reviewers suggests that this is like an Agatha Christie who-dun-it and they are right, a bit like watching a Poirot movie set in the American Wild West! Personally I found the plot quite obvious and there are a few flashbacks to explain it to those who don't quite get it first time around, whilst I guessed what was happening early on, this still didn't spoil the fun, as just like an Agatha Christie novel, you get to see if you guessed rightly or wrongly! So it does have an element of fun about it, it just takes a long time to develop, but in the end, I found the wait worth the while!

Loved this film far more than i thought i would, very funny, very violent, a superb western survival horror.

I really enjoyed this , yes it's slow moving but the story and suspense is good all through the film. You don't always need explosions or a fast moving plot to have a great film. You really never know who is good or bad in this story or what's going to happen next. Good twists all the way through to the end.

Good second half - The Hateful Eight review by PC

This is really a cross between an Agatha Christie whodunit and a sprawling western, unfortunately it takes a good hour and a half to get there. Once it gets going its a good old fashioned violent western Tarantino style, the acting is great but why do all films have to be over 2 hours these days.

I didn't hate it, but I was distinctly underwhelmed. If you're in the mood for a Western retread of Reservoir Dogs, you'll probably enjoy it, but I found it all fairly predictable apart from one specific sequence. And even that involved someone getting shot, so hardly breaking new ground here.

A few minutes in, I realized that it was a Tarantino, & feared more like Django Unchained, but it had the superb Jennifer Jason Leigh & Bruce Dern, so we stuck with it. It lost a lot when Dern left the action, & went down a gear, but we saw it through. If this rating system were more nuanced, I'd give two & a half stars.